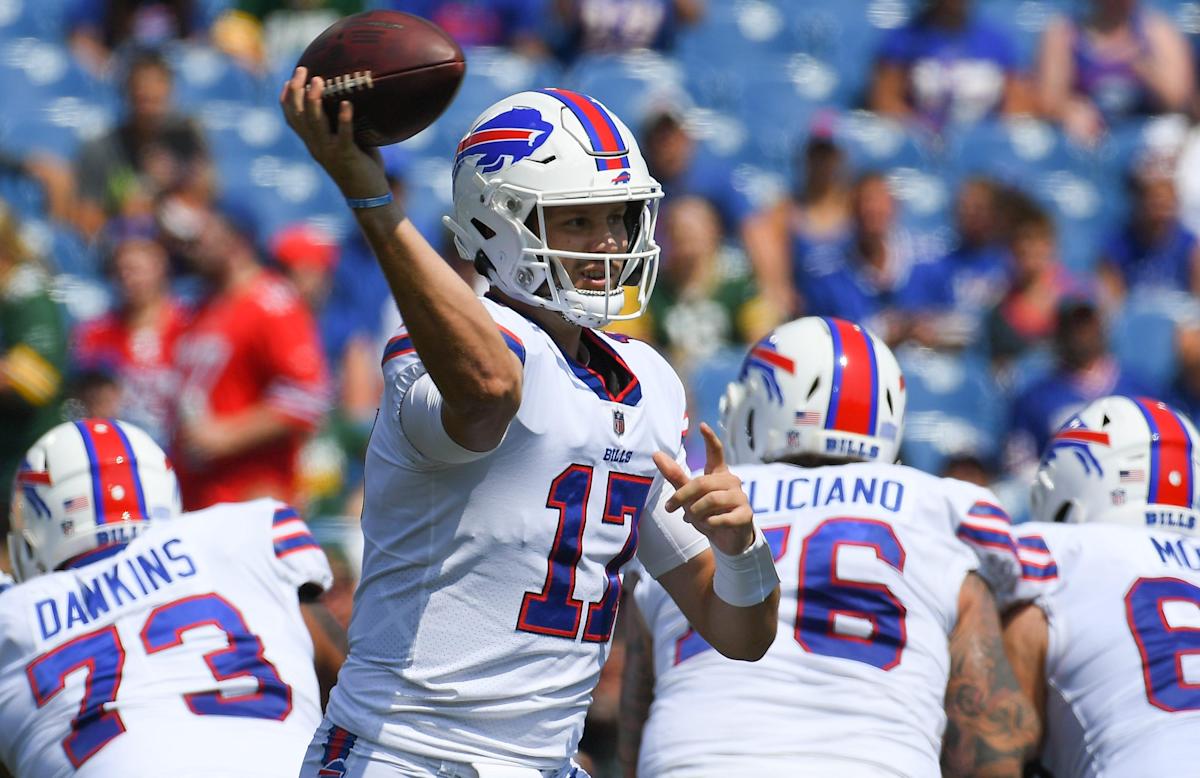 ORCHARD PARK, N.Y. — All it took was 30 minutes for Josh Allen to prove that he’s ready for the regular season, and based on how he played Saturday afternoon, 2021 might look a whole lot like 2020 for Allen and the Buffalo Bills‘ electrifying offense.

The only thing hotter than the blazing summer sun beating down at Highmark Stadium was the Bills’ star quarterback. Making his preseason debut, Allen completed his first nine passes against the Green Bay Packers and ultimately finished 20-of-26 for 194 yards and two touchdowns in two quarters of work.

“Yeah it felt good, obviously getting out there and feeling real live reps and live bullets flying at you,” Allen said. “It’s preseason so we’re not gonna overreact to anything, but we went out there, we executed like we should have, and at the end of the day, that’s all you can ask for.”

Allen led the Bills to a 13-0 halftime lead and then took the rest of the day off. Jake Fromm and Davis Webb handled the quarterbacking in the second half as the Bills finished off a 19-0 victory.

“It was good to see,” Bills coach Sean McDermott said. “I thought (offensive coordinator) Brian Daboll did a good job of establishing a rhythm for us on offense. The execution, I thought, was very high, in particular that first series. The plan was to get him into a rhythm and let him flow a little bit and then get him out. He definitely got into a rhythm and then we got sloppy and didn’t execute and then came back and got into a rhythm, which was good to see. All good experience and things that come up during the season.”

McDermott wasn’t exactly beaming at halftime about the general performance of the team, saying, “Overall we were sloppy. Sloppy with penalties, sloppy with dropped passes, not getting off blocks. We can’t do that.”

Coaches are never completely happy, but as you may have noticed, he had nothing negative to say about his quarterback because, really, how could he?

On the first possession of the game Allen was 10-of-11 for 90 yards and completed passes to five different receivers on the first five plays. He eventually zeroed in on Gabriel Davis and Emmanuel Sanders, who caught three each, with Davis hauling in a perfect 31-yard TD pass on a post.

“That play to Gabe, especially, we hadn’t thrown that ball at all,” Allen said. “We’d never gotten that rep (in practice) because we just never got that look, so to be able to get a look like that and throw it … that’s gonna stay in the memory bank.”

Allen’s second series began at the Bills 1 after the defense made a goal line stand, and this one wasn’t quite as smooth as he was sacked once, pressured into a throwaway and misfired on a third-down pass to Sanders.

But then on his third and final possession, which began at the 20 after Micah Hyde made an end zone interception of a terrible pass by Packers quarterback Jordan Love, Allen was once again outstanding.

He directed a 15-play, 80-yard drive which ended with his three-yard TD pass to Zack Moss on third-and-goal. Along the way, he scrambled for a first down on a fourth-and-2 at the Green Bay 40, and he completed 8-of-10 passes, including a magnificent across his body 21-yard completion to Cole Beasley on a first-and-15 play.

Sanders finally got to play in a live setting with Allen, and he came away pretty impressed.

“Man, it was fun,” Sanders said. “Practices don’t do it justice, truthfully. I mean, it was up-tempo, no-huddle, slinging the ball around. It was fun. We were supposed to play a half, but I looked to Stef (Diggs) and said, ‘I don’t want to come out,’ because I was just getting into my groove.”

Sanders has played with some of the best quarterbacks in NFL history, including Peyton Manning and Drew Brees. He knows a good one when he sees one, and Allen is one.

When Allen completed his first five passes to five different receivers, Sanders was the fifth. “When I saw it happening, it was just like bing, bing, bing, bing. I was like, ‘When is it my turn?’ The next thing you know, it was my turn and I caught it. It was fun. It’s going to be an exciting year for sure.”