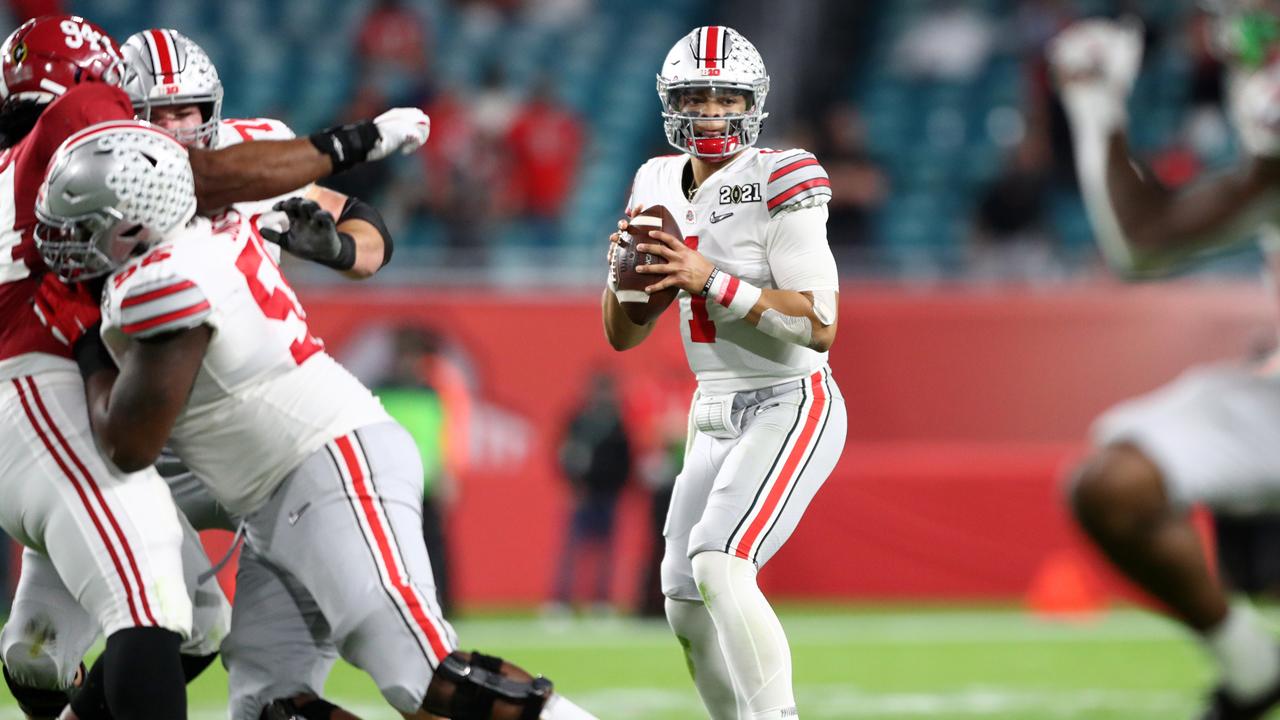 Justin Fields and Mac Jones will always be connected after facing each other in January’s College Football Playoff title game. While Jones’ Alabama Crimson Tide rolled to a 52-24 victory over Fields’ Ohio State Buckeyes, Fields believes he’ll be the better signal-caller at the next level.

Fields performed in front of 49ers head coach Kyle Shanahan on Tuesday at Ohio State’s pro day and took questions from reporters following his workout. The intriguing dual-threat prospect told NFL Media’s Aditi Kinkhabwala that any team would be foolish to draft Jones over himself.

“If they do that, then that’s on them,” Fields told Kinkhabwala. “I think I’m the best quarterback in this draft. If I get a quarterback drafted over me, then they just have to live with that decision and I just hope I get to play that team. I’m just going to leave it there.”

You’re never going to hear a top quarterback prospect — or any elite athlete for that matter — tell a reporter that they’re second-best at something. But you gotta love the No. 1 pick energy from Fields here.

It seems the NFL world, however, is operating under the assumption Trevor Lawrence will go to the Jacksonville Jaguars with the first overall selection.

From there, it’s a bit more muddled as pundits try to parse through the other elite quarterbacks expected to get picked early in the first round of the NFL Draft on April 29. Who will go No. 2? Fields? Jones? Zach Wilson? Trey Lance?

And then comes the question that 49ers fans want to know — who will go No. 3 when San Francisco is on the clock?

QB Justin Fields killed it today, but he says he’ll happily throw again next month if #49ers brass (or anyone else) want to see him in person. “It really doesn’t just happen one time,” he tells me of not needing to stand on today. “I want to show I do the same thing everyday.”

Shanahan explained why he was at Ohio State’s pro day Tuesday to watch Fields over Jones, who worked out at Alabama’s pro day, though San Francisco had representation at both campuses. Both players had eye-popping statistics in college, but now teams are also focused on other numbers, like the blazing 4.4 40-yard dash time Fields posted on Tuesday.

With his mobility and arm, Fields bring a more versatile skillset than Jones. But who will have the better career at the next level? Stay tuned.