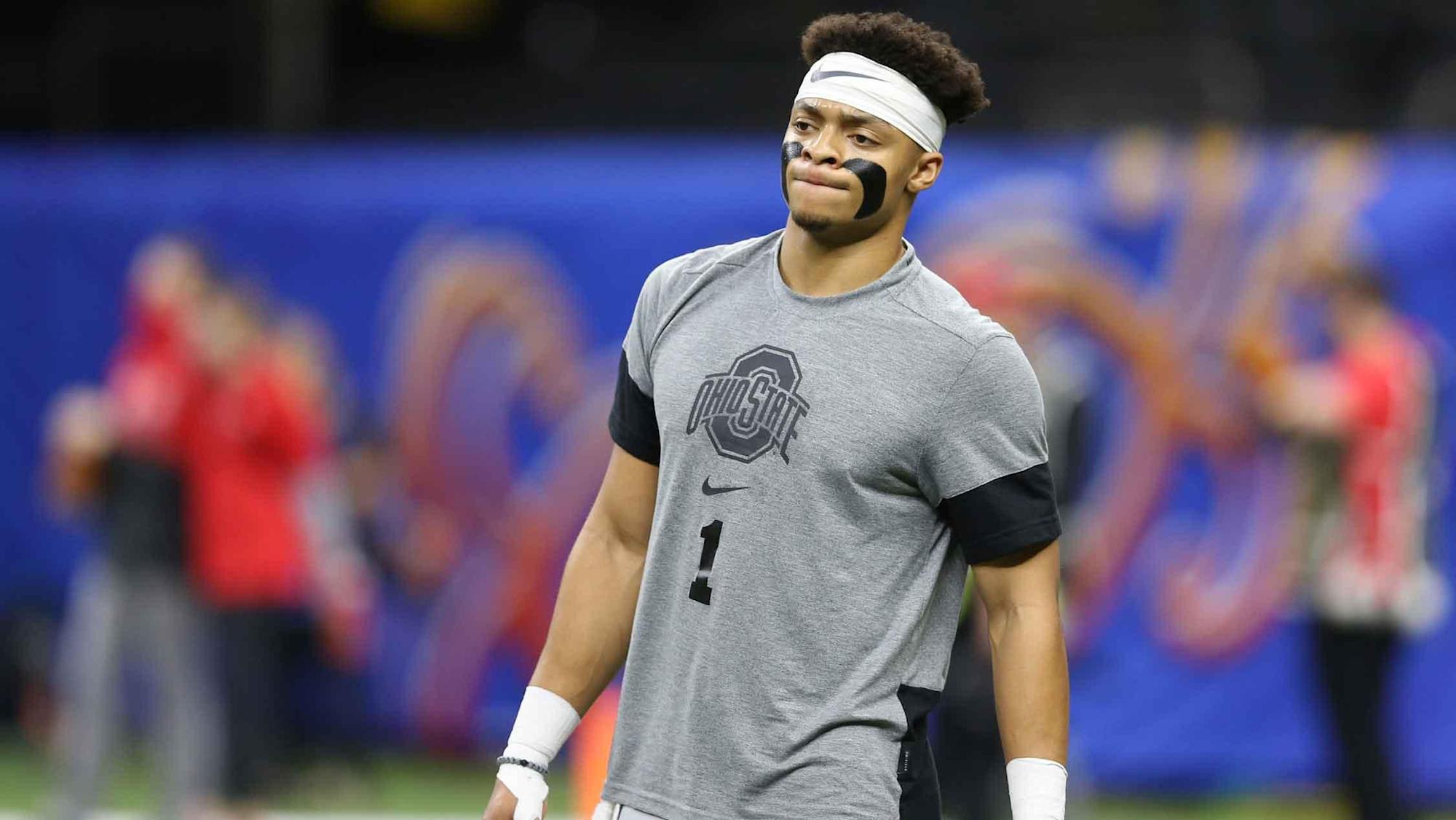 And the other word that showed up in my notebook from Friday’s rookie minicamp practice that matched what I wrote down during that Ohio State-Northwestern game from two seasons ago: Smooth. Everything Fields does just looks smooth and comfortable.

“His mechanics were really good. I thought he seemed super calm,” Bears head coach Matt Nagy said Friday. “A lot of times in these camps, things seem a thousand miles per hour and it didn’t seem that way from where I was.”

Full disclosure: Nagy was on a tablet secured to a stick that was being held and moved around by assistant Kyle Childress. Due to a family member testing positive for COVID-19, Nagy was at home. The head coach was still able to communicate with Fields and the coaching staff during practice, but special teams coordinator Chris Tabor ran the show on the field.

“I just gotta make sure he wasn’t turning this thing into like 80 percent special teams day and telling all the coaches they got Margarita Night tonight,” Nagy joked.

At the risk of going overboard with a rookie minicamp practice we’ll probably never speak of again, I’ll empty the notebook (within the limits we’re allowed to report) and you can choose how much stock to put into Fields’ first practice as a Chicago Bear:

“35” – That’s how many passes I counted before an incompletion. Granted, many of those were against air, but included in there was a dime on a deep out and almost everything was accurate. There was one pass in which Fields held the ball a little long against good coverage and probably would have been sacked in a game, but he still completed the ball. In total, I counted three incompletions and only one that missed the hands of his intended target completely.

“The ball did not touch the ground very much in the reps that he had passing the football, so that part was good,” Nagy said. “And that’s a credit to the other guys too for being able to get up there and know their responsibilities so that those guys can play fast.”

Coaches hate seeing the ball on the ground and it simply wasn’t an issue Friday — a good sign for the receivers too. Sixth-round pick Dazz Newsome made a notable sliding grab on a deep ball from Kyle Sloter, who is attending camp as a veteran tryout player.

But of Fields’ three incompletions, at least one wasn’t his fault.

“There was a play today where we had him in the air, in the route based on the coverage the defense gave us, and I thought it was pretty cool that already on Day 1 Justin was going over and in a coachable and teachable way was explaining to that player, ‘Hey, they changed rotation-wise. Next time that happens you have to run this route instead of that route.’ Day 1, that’s pretty good,” Nagy said.

While the majority of players Fields is working with this weekend will not be teammates in the regular season, rookie minicamp still gives the coaching staff an important first assessment on the field to build off of.

“Those are the types of things that us as a coaching staff we have to say, OK, where’s he at right now? What’s his bottom ground, what’s his base? And once we know what his base foundation is then we can start to build off that,” Nagy said. “Then it’s just going to be how fast he can learn. How fast is this stuff happening? What kinds of plays is he making in practice? What kinds of mistakes is he making? And again, it just ultimately goes back to, we’ll all see it and we’ll know it.”

“UC footwork looks fine” — Ohio State doesn’t really go under center, so I was curious to see if Fields would have any issues with that Friday. He didn’t. There were zero fumbled snaps and the footwork on the dropbacks looked completely natural.

Beyond that, Fields listed his own short-term goals for the weekend: “Just to be crisp with the huddle call. Making sure I’m precise with my reads and stuff like that and really taking command of the huddle and show the guys out there that I am leading the offense.”

Again, there didn’t seem to be any obvious issues. The word “smooth” kept coming to mind as Fields operated an admittedly simplified offense, one that will be much more complex and dense moving forward.

“I think that he had really good command of just kind of going from the play call in the headset, walking into the huddle, calling the play, everyone breaking at the same time and then having that first wide vision,” Nagy said. “There weren’t many false starts at all, which is pretty good. I think we had one from the very beginning which could’ve been on the defense with the shift. I’m not sure, I’d have to see the tape.”

Considering Fields spent the last two years getting calls from the sidelines and not huddling, Friday’s huddle mechanics served as another good first impression.

“The only different thing about our offense is that at Ohio State we did signals from the sidelines so actually getting in the huddle and calling the play out is the only different thing,” Fields said. “Everything else is pretty much the same when it comes to concepts and stuff like that.”

What’s next – The similarities between the offenses are legitimate, but it’s still a different coach’s offense with different terminology, which means Fields has a lot of work ahead of him to be comfortable enough to run it the way Nagy wants it to be run in a game.

Since getting drafted, Fields has been in virtual meetings with Nagy, offensive coordinator Bill Lazor, quarterbacks coach John DiFilippo and assistant quarterbacks coach Mike Snyder. That’s where the mental installs begin. But Fields said he spends 30-45 minutes after those meetings reviewing his notes and has created flashcards to draw up and memorize the formations.

“Eventually I’ll know it like the back of my hand,” he said.

The coaches, meanwhile, have already noticed how committed their new quarterback is.

“He’s got that serious look/mode to him every time he’s around, and then every once in a while, you get that crack of a smile,” Nagy said. “I think he’s always got that competitive drive engrained in him. I think that’s where he’s at all the time. He also has that other side to him as well. The more that we have these meetings, the more that we work with him, the more that we realize and get to see his commitment to being focused on the details of this offense and see how fast he can grow, it gives us a chance to be able to work off of that. But he’s got a really great, professional personality, which I love. He’s all about business right now.”

That much was evident Friday at Halas Hall. It was just one practice, but it was a first impression to feel good about.