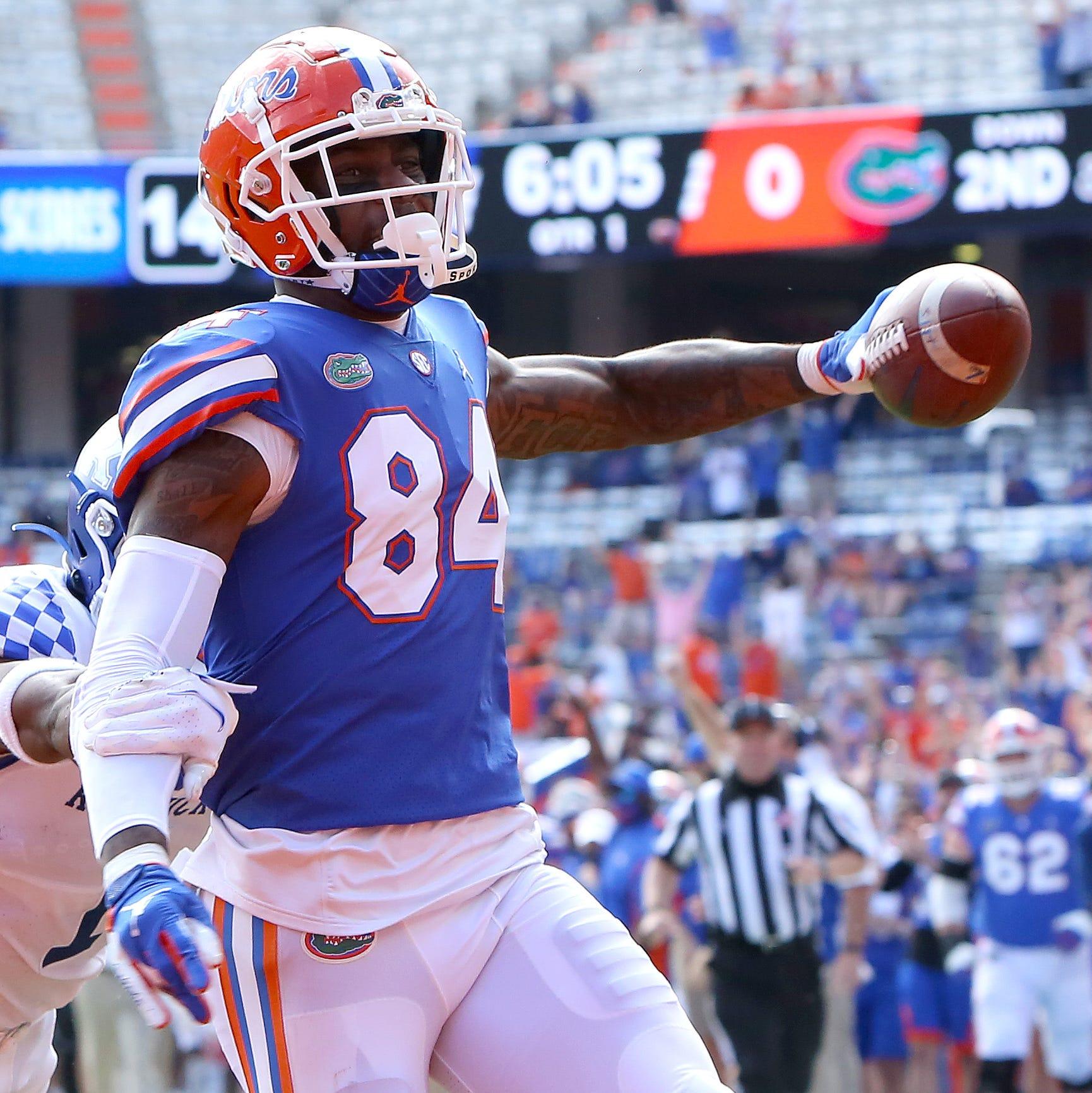 Florida’s Kyle Pitts was already projected as a top-10 pick in the 2021 NFL draft prior to his pro day.

Following his testing numbers Wednesday at UF, the 2020 Mackey Award winner could become just the second tight end to go in the top five in the common draft era (Riley Odoms, 1972).

“I wanted to show everybody my strength and my speed,” said Pitts, who also had a 33.5-inch vertical. “Getting out there and doing those bench numbers (22 reps), a lot of people didn’t expect me to do that. In the 40, I wanted to run sub 4.5. That was something I wanted to show. Just going out there being elusive, getting in and out of breaks, just playing football.”

NFL Network analyst Daniel Jeremiah has Pitts ranked as the No. 2 prospect on his board, and sixth overall is the highest a tight end has been drafted since Odoms. The last player selected at that spot, Vernon Davis in 2006, was coached by Florida assistant Tim Brewster when he was with the San Diego Chargers.

Brewster doesn’t think Pitts will make it out of the top 10.

“Kyle Pitts is not going to be around long,” Brewster said. “I’ve talked to all 32 teams about Kyle Pitts and I think he’s a generation player. He’s just absolutely different in his skill sets and the things that he can do. Antonio Gates I thought would be the absolute best player I’ve ever coached. He’ll be a first-ballot Hall of Famer, and I had him his first three years.

“I think there’s going to be some teams that trade up trying to get a shot at Kyle Pitts. There’s just no holes in the kid. The development that he made in the run game to make himself a more complete tight end I think just totally helped him in the eyes of the National Football League. I would certainly think that he would not get out of the first 10, for sure.”

Brewster, who spent five years with the Chargers and Denver Broncos, said tight end has become a premium position in the NFL. He believes Pitts’ game will flourish at the next level and raved about his athleticism, catch radius and hands, which measured in at 10 5/8.

“The tight end position is totally evolving into one of the absolute important positions on the offensive side of the ball. I think the quarterback and tight ends right now, they’re marquee players,” Brewster said. “I think a guy like Kyle Pitts, he’s going to do nothing but enhance how that position is looked at. Kyle is absolutely different.

“What you have to understand too about Pitts, he’s only 20 years old and he’s got a maturity level that is outstanding. … But again, it’s just about his God-given ability and the type of human being he is. He’ll be a tremendous ambassador for the National Football League in the community. There’s going to be a whole lot of 84 jerseys wherever he goes and plays.”

Despite playing in just eight games due to injury, Pitts finished the season with the second-highest touchdown total by a tight end (12) in SEC history and tied Kirk Kirkpatrick for second on Florida’s single-season record list for receiving yards by a tight end (770).

“Obviously he’s an unbelievable football player,” Mullen said of Pitts, Florida’s all-time leader for receiving yards by a tight end (1,492) and second all-time in career receptions at the position (100). “I got to be around it for three years, so I’ve been wowed by it all. I’ve gotten to see it in meetings, in practice, how he trains, how he works. … When you’re on the field and you’re around him, he’s great to be around.

“But I’m gonna tell you, when you’re in the meeting room and you’re designing a game plan, he’s awfully fun. To have that little spot that you can go put up on the board and say, ‘That’s him. How are we going to move him around?’ That’s a lot of fun too.”

Pitts was a mismatch all year against opposing SEC defenses and NFL Media’s Lance Zierlein expects that to continue in the league. He also compared Pitts to 2021 Pro Football Hall of Fame inductee Calvin Johnson.

“Pitts may have the traits and talent to create mismatches similar to those created by Calvin Johnson and Tyreek Hill,” Zierlein wrote. “His rare blend of size, athleticism and ball skills are reminiscent of Megatron’s. His ability as a pass-catching tight end could force defenses in his division to alter the way they construct their roster. He’s a tough matchup for most linebackers and too big for most cornerbacks.”

Pitts plans to attend the NFL draft in Cleveland, which begins April 29. He expects to have no appetite that night, but will “definitely have a nice suit.”

His name should be called within the first half hour.

“Being able to get that invitation is kind of special to me. Wherever the chips fall is where they fall,” Pitts said. “God-willing if I am a top-five pick or a top-10 pick, then that would be something amazing for myself. And it’s only up from there.”