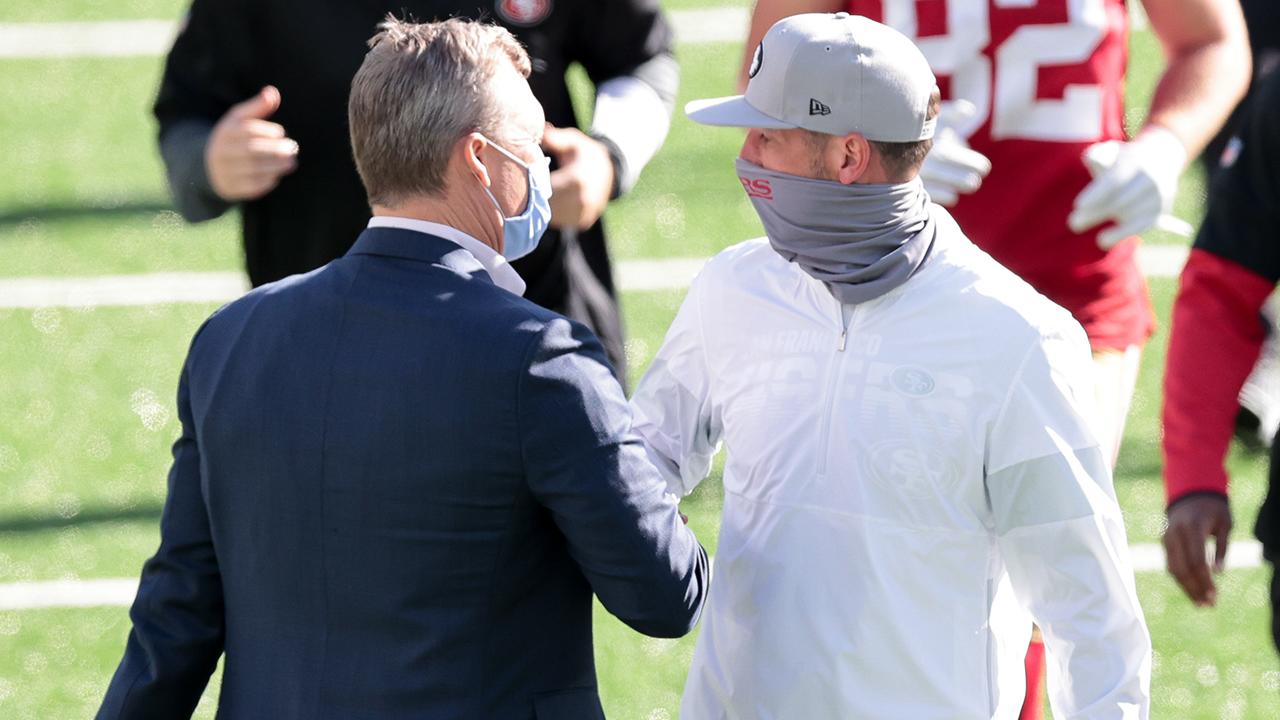 Kyle Shanahan and John Lynch entered into a partnership more than four years ago that faces its biggest test this week.

Shanahan agreed to become the 49ers’ head coach a week before he sat in the booth as Atlanta Falcons offensive coordinator in Super Bowl LI.

Shanahan picked Lynch to come with him as 49ers general manager.

Contractually, Lynch has control of the 49ers’ 90-man roster, which includes trades, draft and free agency. Shanahan has final say over the cuts from 90 players to the regular-season limit of 53 players.

CEO Jed York has plenty of experience with coaches and general managers who clashed.

Therefore, Shanahan and Lynch each have a form of veto power. York’s main priority was to find a coach-GM pairing that can avoid the dysfunction that plagued the organization in the years before they arrived together in Santa Clara.

The 49ers pulled off a blockbuster trade with the Miami Dolphins on March 26 to move from their draft slot at No. 12 overall to No. 3. Silver calls it the “biggest, boldest move in 49ers history.”

The 49ers parted ways with first-round picks in 2022 and ’23, as well as a third-round selection in ’22 to move up to No. 3, where they will select the quarterback to ultimately replace Jimmy Garoppolo.

Trevor Lawrence and Zach Wilson are expected to be the top two quarterbacks selected in the draft. After the Jacksonville Jaguars and the New York Jets make their picks, the 49ers will choose among Justin Fields, Mac Jones and Trey Lance.

Coaches and executives within the 49ers will have their voices heard. One influential person from outside the organization is sure to have a voice, too. Shanahan’s father, two-time Super Bowl-winning head coach Mike Shanahan, is a valuable resource in an unofficial capacity.

But there is only one person who is fully qualified to make the decision, Silver said.

“When it comes to the quarterback of Kyle Shanahan’s offense, presumably for the next decade-plus, I don’t think if there is a disagreement it should go any other way than Kyle’s (decision), and I don’t think it will,” Silver said.

“I believe the reason John Lynch will agree with Kyle Shanahan about the quarterback is because John Lynch smartly believes in his heart Kyle should pick this quarterback because Kyle is awesome when it comes to having a system and coaching up a quarterback to run it.”

The 49ers still are days away from turning in the draft card to make a selection, but the topic already has been hotly debated for the past month.

Few people know which way the 49ers are going to go with the pick. NBC Sports Bay Area has learned the evaluations among Fields, Jones and Lance are ongoing.

A decision will be announced on Thursday evening — early in the 2021 NFL Draft. This selection will have long-term implications and could ultimately determine the success or failure of Shanahan, Lynch and, of course, the 49ers for the foreseeable future.

“Kyle Shanahan has a very specific way he wants his system run, and he should be able to understand what traits can allow a guy the opportunity to really thrive in that,” Silver said.

“The bottom line is I’m excited he’s that excited. And if he’s wrong, like so many other people we’ve covered, he’ll probably be fired.”