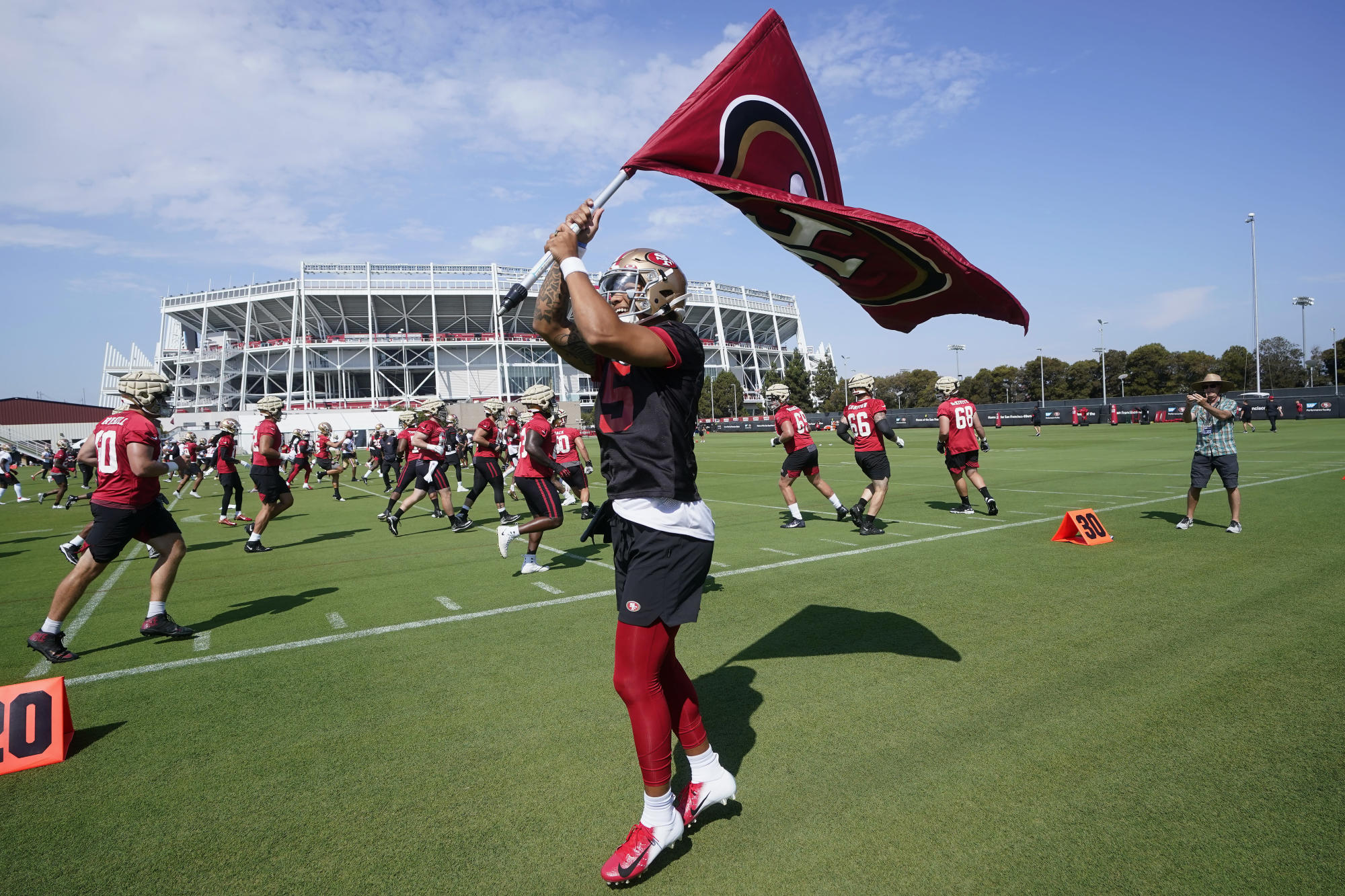 Trey Lance did it again.

The rookie No. 3 overall pick dazzled with only one incompletion on 15 throws during the 49ers’ first practice in pads. He took a snap with the first-team offense, his first of camp, on a designed run play. Next, back with the second team, he slung a deep throw, off-balance, rolling to his left, and dropped it into the hands of wide receiver Trent Sherfield some 50 yards away.

Once again the Lance hype train picked up speed, but once again head coach Kyle Shanahan reached for the brake. Whether he wants to slow the hype or not is unknown, but it’s certainly the right thing to do.

“I think since OTA, I think he’s put a lot of work into it and I think it’s getting better each day. I think that’ll continue to happen just the more he plays and the more he works at.”

There was zero mention of the play itself. He stuck to the mantra of Lance putting in work and needing to get better.

When will Lance get a chance with the starters?

“When I think he gives us the best chance to win,” Shanahan said.

As frustrating as this consistent line of thinking is for passengers on the Lance Train, it’s the correct tact for the head coach to take.

He can’t just hand a rookie the job in a scenario where he’s navigating the locker room and the starting spot for a well-liked player in Garoppolo. Lance will need to earn the job, and even if he’s hitting checkpoints sooner than expected, one padded practice and six total sessions isn’t enough to unseat a starter that helped get San Francisco to a Super Bowl in his only full season as a starter.

There’s another aspect of that where Shanahan can’t go back once he’s put Lance on par with Garoppolo. If he starts splitting starters reps now, and Lance doesn’t wind up beating out Garoppolo, the 49ers could have a pretty significant problem on their hands where there’s a question mark about the starter going into the year. Once Lance is handed the keys, he’s the starter regardless of the ups and downs he faces. Shanahan is trying to avoid the scenario where he has “two” starting quarterbacks.

They need to have an established starting signal caller by Week 1, and Garoppolo despite being less physically talented than Lance has the experience to start and win an NFL game as of August 3. Even if Shanahan believes Lance will eventually supplant the veteran, he can’t say so.

Garoppolo’s trade value is also necessary to consider. Once he becomes the 49ers’ backup it diminishes his value on the trade market. The Colts already saw Carson Wentz go down with a foot injury, and it’s not out of the question that another club could become desperate for a QB at some point during camp.

This probably isn’t something Shanahan is considering very closely, but it would certainly behoove the 49ers to buoy Garoppolo’s trade value just in case it becomes a factor at some point during camp.

It’s hard to imagine Shanahan’s tone changing any time soon, especially prior to the first preseason game on Aug. 14. Even if Lance continues lighting up the practice field, expect a measured tone from their head coach. It’s going to become more difficult as camp wears on, but there’s clearly a path the 49ers are following, and it’s probably the right one.

There’s no harm in stringing out Lance’s backup job and he eventually becomes the starter. There would be some harm if the opposite took place. Shanahan and the 49ers are playing it slow with Lance, and given what’s at stake after they spent three first-round picks on him, that’s the right way to go.