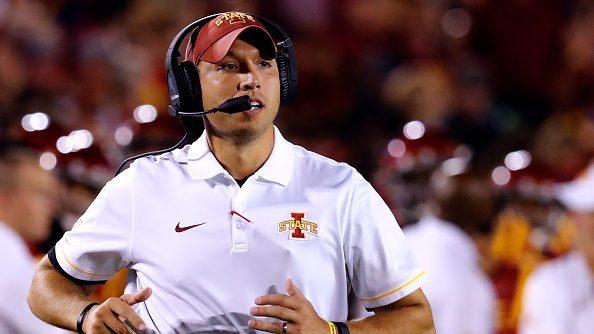 While the Detroit Lions ended up with Dan Campbell as their newest head coach this offseason, it was a different Campbell that got a massive offer to entice him to lead the franchise.

According to Dennis Dodd of CBS Sports, Matt Campbell of Iowa State was offered an eight-year deal worth $68.5 million to leave the college ranks and take over the Lions program from fired head coach Matt Patricia and interim head coach Darrell Bevell.

“In the offseason, [Campbell] turned down an eight-year, $68.5 million offer from the Lions, — apparently, with full control, I haven’t confirmed that — to stay at Iowa State,” Dodd said. “Now if I’m Matt Campbell’s wife, I’m having some questions. But he sees his upward arch better at Iowa State than, look, the Lions that are annually at disarray. But look — I would take that money and take my chances at disarray for over the next eight years than Iowa State. But if you want to talk about loyalty, he’s the ultimate loyal guy.”

Matt Campbell has been sought after by NFL teams through a few coaching cycles with him ultimately deciding to remain in his post in the Big Ten instead.

Via Dave Birkett of the Detroit Free Press, Dan Campbell joked that he told his agent to negotiate as if he was Matt instead of Dan.

“Just in regards to the head coach search, how I ended up here, one of things would be that I told my agent, Rick Smith, I said make sure that they think I’m Matt Campbell, so I think that’s how this has really worked out great for me,” Dan Campbell said. “So now that I’m in the seat, I am Dan Campbell. But I do know this, you can’t go wrong with a Campbell.”