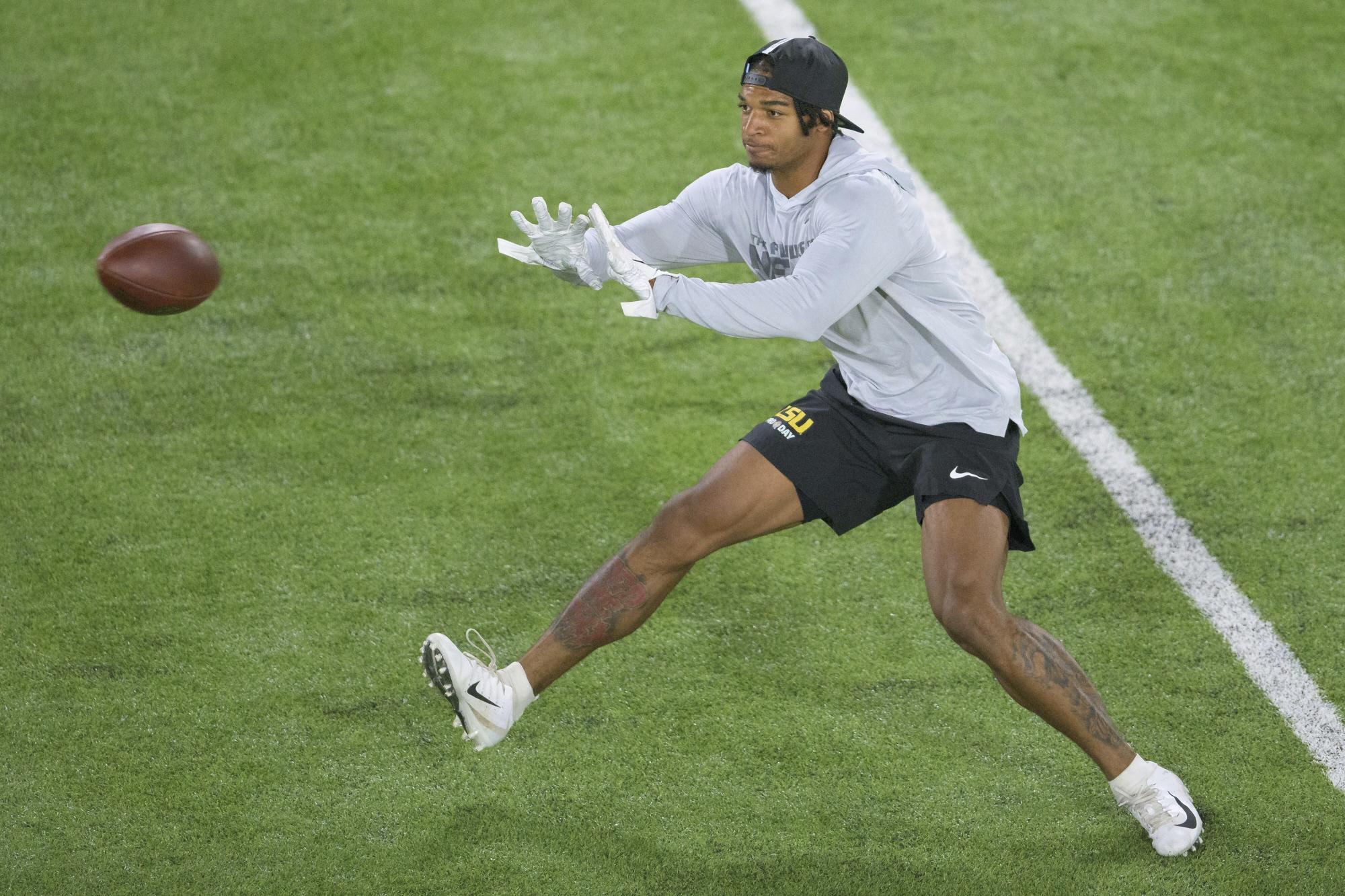 The skinny: A 4-star Rivals recruit (No. 67 nationally), Chase had planned to go to Ole Miss (before the program was hit with recruiting sanctions), committed to Florida at one point but settled on LSU late in the process. As a true freshman in 2018, he caught 23 passes for 313 yards and three touchdowns, starting seven of 13 games (including the final five). In 2019, Chase caught 84 passes for an FBS and an SEC record 1,780 receiving yards and 20 touchdowns, also rushing once for 5 yards in 14 starts. He was named the Biletnikoff Award winner (given to the nation’s top receiver) in 2019, also named first-team AP All-America and first-team all-SEC (unanimous), helping LSU win a national title with nine catches for 221 yards and two touchdowns in the championship game vs. Clemson.

Chase was awarded the coveted No. 7 jersey, which is given to players who earn a high level of respect on the Tigers (a tradition started with Patrick Peterson), prior to the 2020 season. But he chose to opt out of the season and declare early for the 2021 NFL draft.

Upside: Explosive athletic ability. Thick, nicely built frame. Tree trunks for legs — almost built like a running back in the lower half. Great strength and burst. Left no doubt about his athleticism with his pro-day showcase — ran a scalding 4.34-second 40-yard dash, vertical jumped 41 inches, broad jumped 132 inches and had a 20-yard shuttle time of 3.99 seconds.

Smooth operator — glides in his routes. Makes it look effortless. Great tempo and patience in his approach. Accelerates in a jiffy and can gear up at the second level. Natural separator. Great body control and balance throughout his routes. Explosive leaper on jump balls. Instantly transitions into a runner after the catch — outstanding YAC ability. Taps both feet inbounds on sideline grabs — already pro-ready in that regard. Part ballerina, part bulldog.

Displayed the ability to work back to the football — can break off his routes and has an innate feel for finding space, especially when his QB is buying time or scrambling. A threat to all parts of the field and with any concept — short stuff in the quick game, attacking the middle of the field, going vertical. Can line up inside and out.

Tremendous play strength — tough and physical through contact and is often the one initiating it. Can beat press with strong hands, will joust with corners at the catch point and can rumble through tackles after the grab. Subtle hand fighter throughout the route. Hyper-competitive and hates losing the physical battle. Uses his frame to box out well and maximizes his physical gifts. Averaged nearly two broken tackles per game in 2019.

Natural hands — not a body catcher. Only five drops on 121 targets in 2019. Has the great hand strength to rip 50-50 balls away from defenders. Great flexibility to adjust his body to off-target throws and make catches outside his frame. Great timing and hand-eye coordination to go up and get balls, especially downfield.

Battle-tested vs. the best of the best. Faced several current and future NFL DB talents in 2019 against a daunting schedule. Dominated his matchups with AJ Terrell and Trevon Diggs, both 2020 rookie NFL starters. Also squared off in daily practice battles vs. teammate Derek Stingley Jr., a possible top-10 pick in 2022, winning more than he lost.

Mental strength matches his physical gifts. Smart, savvy performer. Character, work ethic and football IQ are considered very strong, per team sources. Intense competitor — an alpha dog who has the “it” factor to be an NFL WR1. Most of his weaknesses can be improved with coaching and experience. Just turned 21 years old and has sky-high potential.

Not yet a fully refined route runner. Rounds his breaks and could add a dose of subtlety to his approach. Ran a somewhat slimmed-down route tree. Will rely heavily on his competitiveness, quickness and strength to shake free. Suffered from some concentration drops as a freshman. Gets a little too handsy at times and could be an OPI target.

Could get hung up on press releases at times and will face stiffer challenges in that regard in the NFL. Had some issues with the length and tough jams at the line from Cam Dantzler and Patrick Surtain II. Also was quieted a bit by Florida CB C.J. Henderson if you throw out one switch-release route that went for a TD in which Henderson ran into his own man.

Did his heavy lifting in college on perhaps the best college football offense of all time. Wasn’t used much at all on special teams and not employed as a runner (one carry). Used sparingly in the slot, usually just when LSU went to an empty formation.

Best-suited destination: An NFL scout posed the question this way: If you could have chosen one of the two, Chase or Justin Jefferson, following the 2019 college football season, you would have picked Chase, right? Well, all Jefferson did was catch 88 passes for 1,400 yards and seven TDs as a rookie.

If you were not convinced by this point that Chase has it all as a receiver, those fears should be put to rest. He profiles as an “X” receiver who can move inside at times and has the look of a future top-10 wideout in the league. We expect Chase to start immediately and be productive from Jump Street.

Player comp: We struggled finding an accurate comp, but Chase has a little Roddy White and Hines Ward to his game.