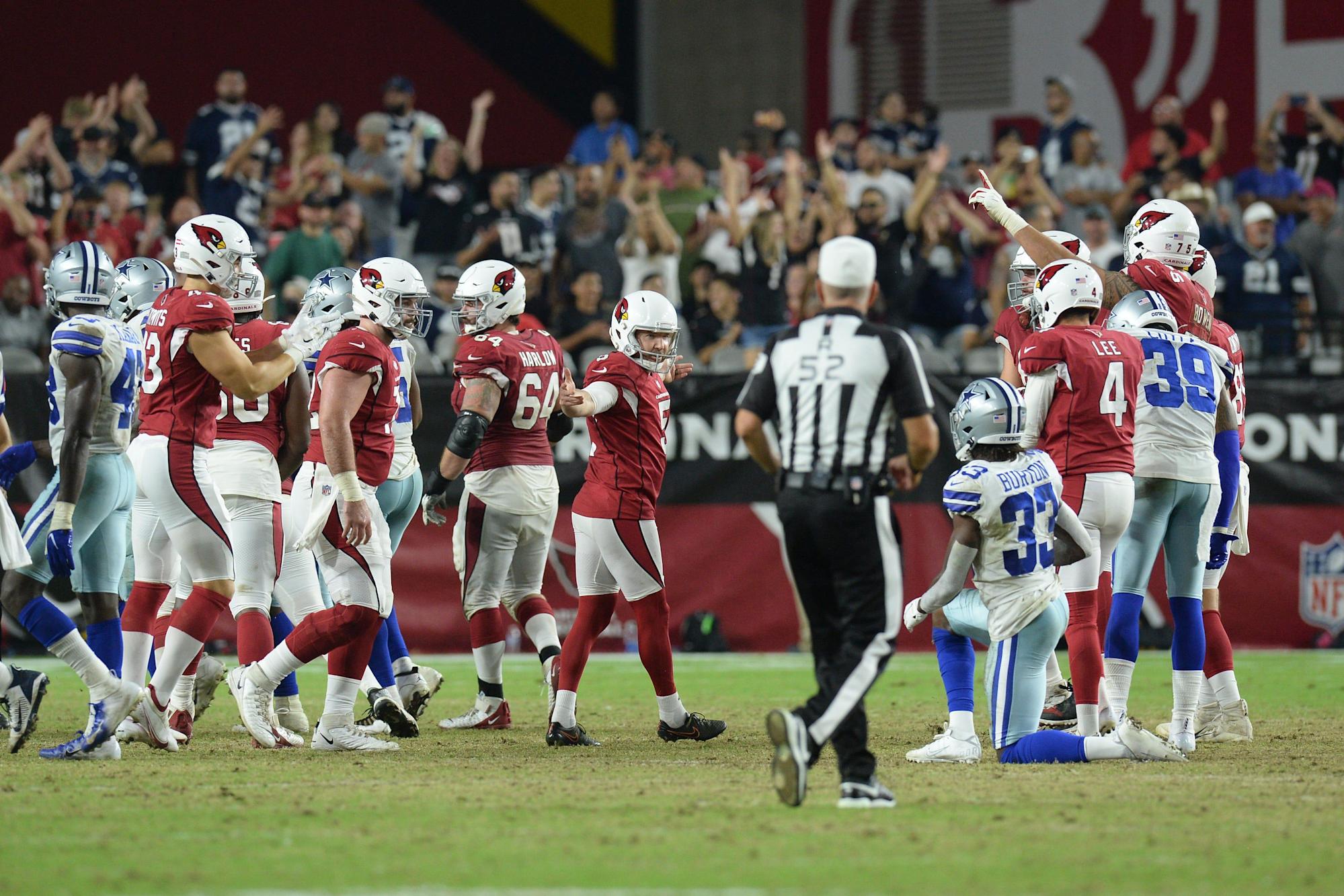 Matt Prater‘s 47-yard field goal as time expired sent the Arizona Cardinals to a 19-16 win over the Dallas Cowboys on Friday night in their preseason opener at State Farm Stadium.

Prater made all four of his kicks and former Arizona State running back Eno Benjamin scored on a 6-yard touchdown run in the Cardinals’ first preseason game in almost two years. Benjamin, a seventh-round draft pick in 2020 who wasn’t active for any games last season, had a 35-yard kickoff return in the first half and, after starting the second half, broke off a 38-yard run to set up a Cardinals field goal. He totaled 50 rushing yards.

The largest crowd (59,954 fans) to see a Cardinals game since the 2019 regular season saw the home team play without a number of stars and regulars, including quarterback Kyler Murray, wide receiver DeAndre Hopkins, linebacker Chandler Jones and safety Budda Baker.

No more than 4,200 fans saw a Cardinals game last season amid the COVID-19 pandemic.

“Great to experience the fans. It feels like football is normal again,” said quarterback Colt McCoy, who got the start in place of Murray.

Head coach Kliff Kingsbury wasn’t completely conservative on offense, calling a direct snap to running back Chase Edmonds and a deep pass from McCoy to Christian Kirk in the first quarter.

The Cardinals went to rookie second-round draft pick Rondale Moore often early in the game, with short passes and end-arounds designed to get the speedster out into the open field.

Moore’s yardage on the second possession of the game for the Cardinals set up a 33-yard Prater field goal.

Rookie Zaven Collins started at linebacker and played the first three defensive series for the Cardinals. The 2021 first-round pick tackled well and was calling signals in the huddle.

“It was more than what I thought it would be. When you’re in the NFL, you’re like, ‘This is the best,’ ” Collins said. “I felt pretty poised. I felt pretty comfortable within our defense, with our schemes that we had drawn up.”

After cornerback Daryl Worley forced a fumble midway through the second quarter, Chris Streveler came in for McCoy at quarterback and ran up the middle for a 23-yard gain, colliding with Cowboys safety Israel Mukuamu rather than sliding or going down on his own.

That play energized the crowd, which roared when Benjamin scored to make it 10-3 before halftime.

“Everything about (Friday) night felt great. Just going out there with my teammates and being back here in Arizona was also another thing that made it a little bit easier as far suiting up for the night,” Benjamin said.

“It wasn’t too big for them,” Kingsbury said of his young players. “I know it’s just a preseason game, but there’s fans in the stands and it’s NFL football and it’s playing the Dallas Cowboys. I thought they went out there and competed. It looked like the effort was good.”

Streveler’s 10 carries for 55 yards led the Cardinals in rushing for the game. He also completed 12 of 24 passes for 107 yards. The Cardinals gave up four sacks but did not sack the Cowboys QBs once.

More: What we learned from the Tennessee Titans’ preseason win vs. the Atlanta Falcons

Benjamin’s long run in the third quarter set up another Prater field goal. But the Cardinals defense, made up of backups and roster hopefuls in the second half, lost the lead in the fourth quarter before the offense rallied the team.

Streveler led a late-game drive and got the Cardinals to the Dallas 25-yard line with 1:55 to play. After a sack and false start penalty on fourth down, Arizona was given another fourth-down play, and Prater booted a 48-yard field goal.

Then the Cardinals’ defense held, the offense got the ball back with 51 seconds left and Streveler engineered the winning drive.

” ‘Strev,’ just very scrappy there at the end. Made play after play and was getting knocked around and kept getting up and kept fighting and found a way at the end,” Kingsbury said.

— There were two announced injuries in the game for the Cardinals. RB Jonathan Ward left the game in the third quarter with an ankle injury, and S Chris Banjo also came out in the second half with a hamstring injury.

— Kingsbury didn’t indicate that Murray, Hopkins, Jones and Baker were injured. He noted that they all had a good week of practice and were simply held out.

— The Cardinals left an empty seat in the State Farm Stadium press box, reserved and decorated with flowers and framed photos for the late Pedro Gomez, a former Arizona Republic sports writer who was one of the country’s leading baseball journalists before his death in February at age 58.

Get in touch with Jose Romero at Jose.Romero@gannett.com. Find him on Twitter at @RomeroJoseM.