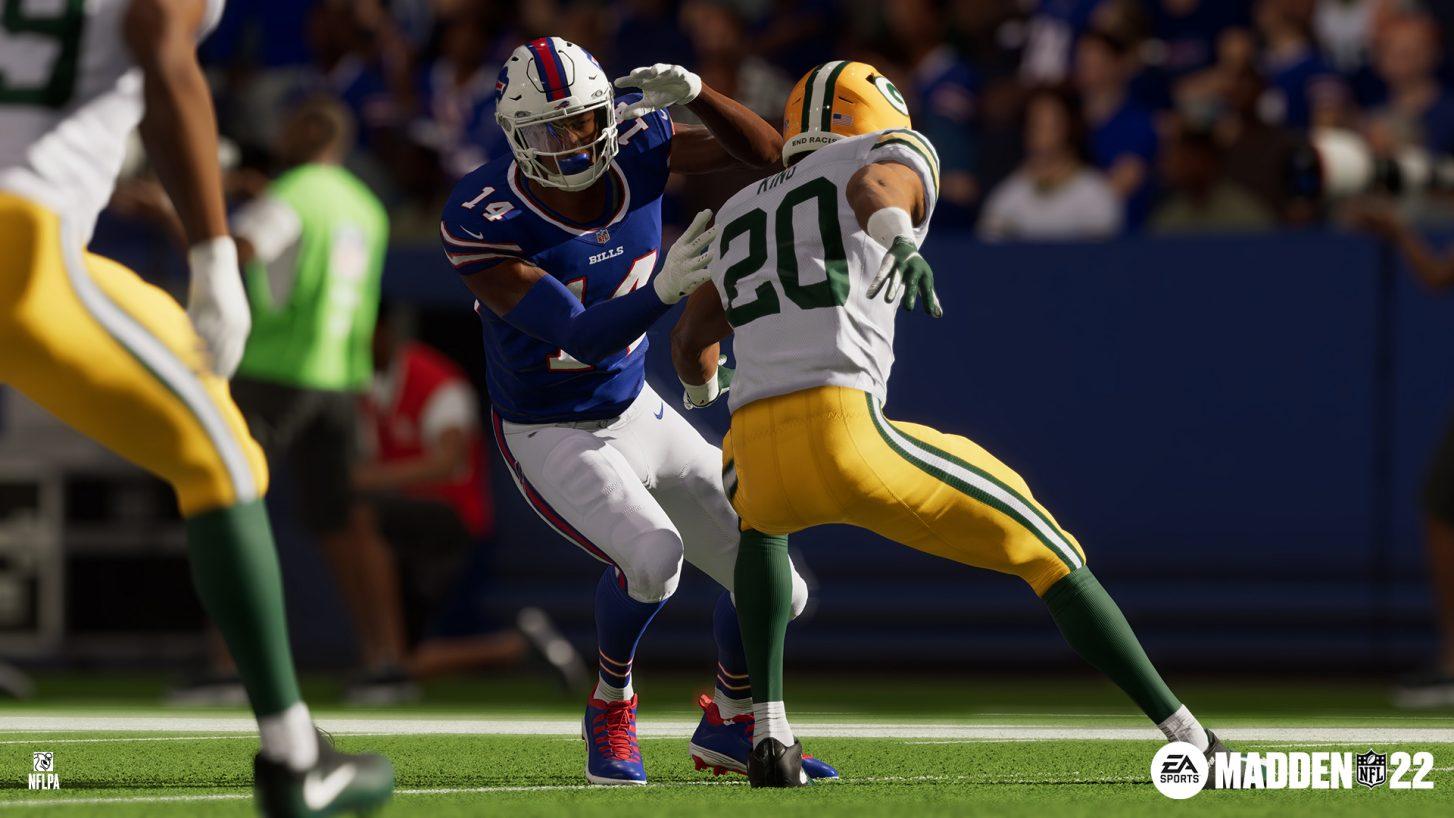 For years, a contingent of gamers has said EA Sports’ “Madden” franchise is nothing more than a roster update when it’s released each year. And to an extent, they have a point. There have been small improvements made over the years, but the game hasn’t gotten a major overhaul to truly wow those who come back playing it each and every August.

“Madden NFL 22” falls in line with that trend. It’s a decent upgrade that makes it feel like more than just a roster update. The game day experience is better and more realistic, gameplay itself is improved with better tackling and receiving mechanics, while franchise mode also gets some love with coaching trees, more in-depth game planning and other small tweaks.

Overall, Madden 22 is a rather enjoyable game, even if it’s not the massive upgrade fans were hoping for on next-gen consoles. Here’s my review after spending about a week playing the game on PS5.

Madden 22 looks really good on the PS5. Player models are accurate, with their faces looking more realistic than ever before. That’s to be expected, though, with the jump to next-gen consoles – even though Madden 21 was upgraded for PS5 and Xbox Series X/S last year. Stadiums look awesome, fans have a more genuine look – despite one desperate Buccaneers supporter holding up a “Please Win” sign in the stands at Raymond James Stadium – and many of the camera shots between plays and before kickoff are impressive. Quarterbacks have their own unique throwing motions, footwork and playing styles, but there’s still a little to be desired in this department. I would love to see EA go all out with motion capture to really hone in on each player’s movements and mannerisms. I want to see Matthew Stafford drop his arm angle and throw a sidearm bullet over the middle. I would love for Nick Chubb’s running style look different than Alvin Kamara’s slashing steps in the hole. There just doesn’t feel like enough of a difference between the biggest stars in the NFL, but that’s something motion capture would greatly improve from the currently stale player movements. The menus are fine despite some minor annoyances, like overlapping text in Ultimate Team. The momentum tips in the bottom right during a game also cover pre-snap adjustments, like shifting the defensive line or linebackers to the point where you can’t see which directions on the left or right stick change what.

If you played Madden 21 – or any of the last few iterations of the game, for that matter – Madden 22 won’t feel drastically different when you’re in a game. There aren’t any major gameplay upgrades, but it does seem like an improvement over last year’s game. The biggest difference you might notice is in tackling. The Hit Stick feels much more rewarding, with fewer defenders aimlessly lunging at ball carriers with their head down, whiffing badly in the hole. Instead, the Hit Stick reaches further and is more directionally accurate. That’s a welcomed update and makes tackling as a whole feel much more realistic. And when a smaller cornerback collides with a bigger running back or tight end, you won’t see the diminutive corner plant the offensive player on his back with a bone-crushing hit the way it happened all too often in Madden 20 and 21. Overall, hits and tackling have a more genuine look and feel to them. Multi-player tackles were added years ago but again, they feel even better this year. That’s a common theme with Madden 22. There may not be massive gameplay changes, but minor tweaks have made the game as a whole more enjoyable to play. When the ball is in the air, it doesn’t feel as random as it used to. Player animations are better when attempting to make a catch and coming down with a difficult grab – such as a jump ball – has more to do with positioning against the defender rather than wonky physics due to a random cycle of animations. That said, it’s still not perfect. Too many times, a player will make a catch near the sideline while standing perfectly still and inexplicably fall out of bounds despite having 10 yards of green grass in front of him. Frustrating, to say the least. And offensive line play hasn’t made many strides. It’s better than last year, but a guard letting a defensive tackle slip through the line unblocked on an inside zone run, just to climb to the second level and still not seal off a block gets old. It’s better than previous years, but there are still kinks for developers to work out when it comes to blocking. And that’s not exclusive to the running game. Too often, centers get beat in a split-second by interior rushers – and I’m not talking about Aaron Donald-type players. There were times where my quarterback was being wrapped up before I could even read the field. Perhaps my biggest issue with the gameplay is the frequency with which quarterbacks fumble the ball when trying to escape the pocket, before even getting hit by anyone. Twice in a short span, Stafford simply dropped the ball when I tried to scramble before a defender even hit me. Quarterbacks always have lower “carrying” ratings and fumble more often than receivers and running backs, but plays like the one above don’t really happen in the NFL.

This is arguably the biggest addition to the game. “M-Factors,” as EA calls them, give home teams an advantage based on momentum. This has never been part of Madden before, and it’s a welcome addition. Make a big play and shift the momentum bar your team’s way, which unlocks special benefits depending which team you’re using. The Rams, for instance, have an advantage called “Rams House.” It gives them bonus momentum for making defensive stops. Another example is the Seahawks’ advantage, which causes the away team’s play art to be difficult to read, with squiggly moving lines showing route combinations. When the home team has a lot of momentum and the gauge is shifted heavily in its direction, the away team can feel it. The camera shakes more, the controller has added vibration and it adds to the realism of a matchup at a stadium that’s actually difficult to play in. Again, it’s not a massive feature that will draw people in, but for those who play Madden every year, it will feel new – and new additions to the game can be hard to come by from year to year.

Fans’ calls for EA to fix franchise mode have been answered … sort of. Developers kept true to their word last year about improving the heavily played mode in Madden 22, making some changes to franchise mode. It will still leave some gamers disappointed, but at least this year’s changes can be noticed and felt. For starters, you can now develop a coaching tree, upgrade offensive and defensive coordinators and improve the staff as a whole. It adds another layer to the mode, giving players more to tweak and level up between games. Weekly strategy and game plan installs remain a part of the game, which is good to see, but they’re even more in-depth. You can see tendencies of your upcoming opponent, from plays they run on specific downs to areas where they can be exploited. Additionally, in the week leading up to a game, you can choose your approach to practice. You can go with full pads, rest the starters from certain position groups and use a strategy that balances keeping players healthy over wearing them out during the season. EA also plans to improve scouting in franchise mode, which is good to hear. And hopefully in the future, there will be real-life college players in the game now that they can earn money for their name, image and likeness. But that’s probably a ways out.

The Yard was introduced last year, adding another game mode for players to explore. It’s in the NFL Street genre of arcade football, but still leaves plenty to be desired. It feels kind of gimmicky and repetitive, being more of a pick-up-and-play mode than one gamers will grind for hours on end. The addition of a campaign in The Yard is a nice touch, though. It gives the mode more purpose, especially when doing so in single-player mode. You’ll play on different fields across the world and develop your created character, earning upgrades for your player in a chosen Class. There are ability pools that you can unlock and Classes to choose from, almost in an RPG-like fashion. You can upgrade various skills such as coverage, tackling and speed, making your own player better as you play. Franchise mode and Ultimate Team will still reign supreme, but it never hurts to have additional game modes when you’re just looking to pick up and play a quick game.

Ultimate Team is hard to dive into this early into the game’s release since there are limited challenges to play through, but it has a similar feel to recent versions of the mode. There are solo challenges to grind, head-to-head games to play, packs to purchase and sets to fill out, all of which are familiar to frequent Madden players. It’s still microtransaction-filled, with gamers being able to pay for packs to improve their teams with better players. Ultimate Team is either something you love or stay away from, mostly depending on how often you play Madden because it can be time-consuming.

Madden 22 is a good game. I’ll say that. It falls in line with what EA has released in recent years, giving gamers a solid simulation football game to play every August. But the lack of shiny new features makes it feel stale and outdated once again. Fortunately, the gameplay itself is improved and franchise mode has some nice features that redeem this from feeling like just a roster update, as so many call it these days. But there are no revolutionary changes to the skill stick on offense, or throwing the ball as a quarterback, or playing DB. The Yard and Superstar KO are a nice break from the traditional style of games if you’re looking for something different, but neither will have you hooked for a lengthy period of time. Ultimate Team gives gamers another year of challenges and solo battles to grind through, and franchise mode is, well, franchise mode – now with RPG elements of upgrading coaches and players. I’ve enjoyed playing this year’s Madden. The presentation elements and slightly improved gameplay give it a more realistic feel. But until we get a major overhaul from EA, it’ll be hard to feel truly excited for the latest release. Final score: 7.5