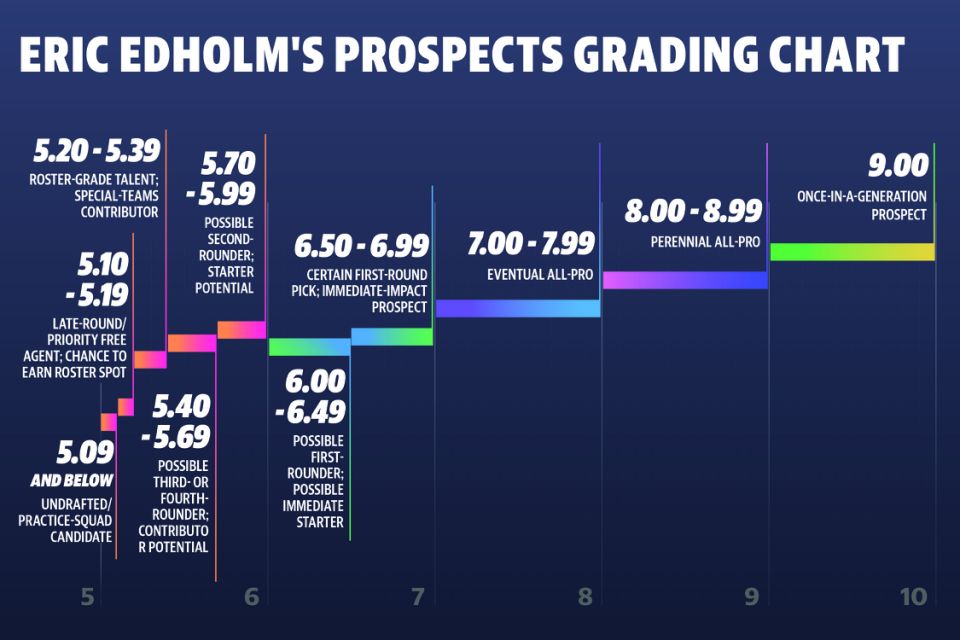 TL;DR scouting report: Throwback “Mike” linebacker whose hard-hitting and coverage instincts make up for his lack of elite traits

The skinny: A 3-star Rivals recruit out of Texas, Bolton didn’t receive a ton of offers from in-state programs, so he headed north to Mizzou. As a freshman in 2018, he made 22 tackles (one for a loss) and one sack in 13 games (one start).

In 2019, Bolton broke out with his best season, with 107 tackles (7.5 for losses), one sack, two interceptions (one pick-six) and 10 pass breakups, starting all 12 games and earning first-team all-SEC mention. He finished up strong in 2020 with 95 tackles (7.5 for losses), one sack and five pass breakups in 10 starts, earning second-team AP All-America mention. Following the season, Bolton declared early for the 2021 NFL draft.

Upside: Great instincts — has the eyes and anticipation for the position. Takes good angles to the ball to where you think he’s a 4.4 tester. Super football intelligence, character and temperament. Thick, rugged build to hold up amongst the big boys. Nice pro-day testing numbers in the 40-yard dash (4.59 seconds) and on the bench press (24 reps).

Tone setter. Big, violent hitter with bad intentions — sells out his body to make a stop. Brings the hammer every time out and manages to deliver two or three huge blows per game. How did Tennessee’s Jauan Jennings not score on this play from 2019?

Bolton is a name to file away for next year pic.twitter.com/WiTPCzmGFF

Able to sort through the trash, navigate through tight windows and stay off of blocks. Also plays with excellent control. Only flagged for two career penalties (one being a very questionable targeting call vs. Arkansas), which for how he plays is wildly impressive.

Just turned 21 years old in March — plenty of growth potential as a player remaining. Detail-oriented player — note taker and film watcher who studies his craft hard. WIll put in the time necessary to reach his peak. Respected teammate and leader. Profiles as a key special-teamer — nearly 500 snaps of experience on those units in three seasons.

Downside: Might be a one-position player — “Mike” or bust. Lack of elite physical traits could limit some of his coverage ability and positional flexibility. Instincts might only carry him so far.

Not going to match up well when singled up in coverage against longer tight ends and quicker backs. More experienced in zone coverage than man. Not twitchy enough to consistently cover and tackle in space.

Missed tackles have been an issue. Will come in hot and overrun his target or fail to wrap up with his shorter arms. Most of his misses tend to come on the perimeter.

Best-suited destination: Bolton should be thought of as a three-down linebacker, either as a 4-3 “Mike” or as an inside linebacker in a 3-4 system. The old-school middle ‘backer might be seen as something of a relic, but Bolton’s coverage instincts and effort should translate in the NFL, perhaps on a more zone-oriented defense. He has the chops to be an instant contributor as a rookie, on both defense and special teams.

Did you know: Bolton’s father, Carlos, was a linebacker and defensive end at Louisiana Tech, and Nick credits his father for first introducing him to tape study — back in first grade.

Player comp: A slightly less explosive Eric Kendricks, although if he was a tick faster and bigger, we’d also throw Demario Davis out there.