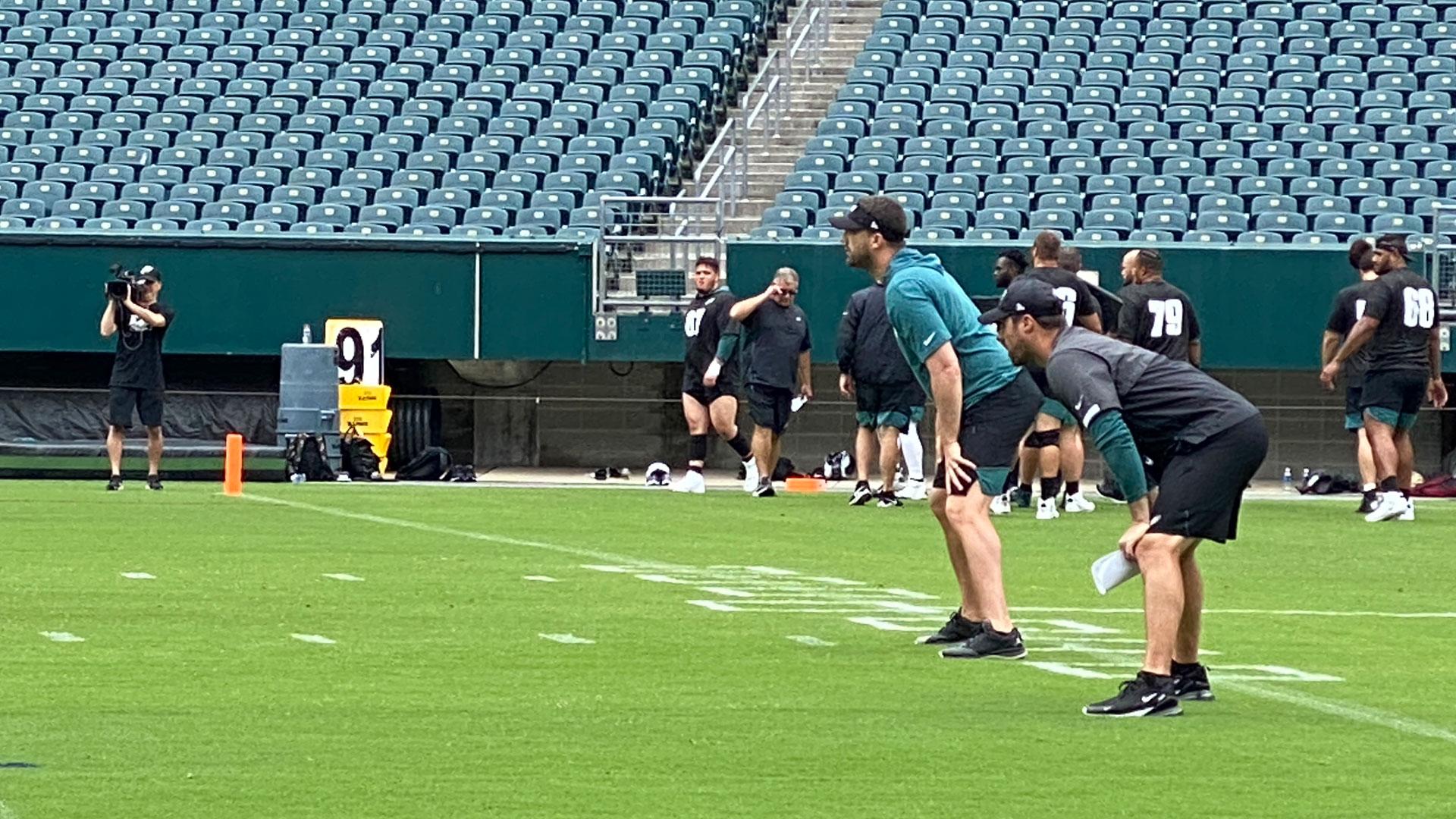 The Eagles wrapped up their voluntary offseason program on Friday with a practice that began in the late morning at the Linc.

It felt good to be back in the stadium and it was our first look at head coach Nick Sirianni and some newcomers in the building.

Here are some observations from the portion of the practice that was open to reporters:

1. Again, very strong attendance for the Eagles on Friday. The Eagles came to this agreement with Sirianni to have some sort of voluntary offseason after initially releasing a statement saying they would stay away. It wasn’t quite OTAs, but this work on the field is very important, especially as the Eagles install new offensive and defensive schemes.

2. The Eagles began their practice with a high-spirited competition between Travis Fulgham and DeVonta Smith, who both tossed footballs and caught them off a tetherball-like contraption. The more they caught, Sirianni kept moving them back farther. Neither dropped a ball, so I guess they both won.

A little later in the practice, Sirianni called for another competition for the DBs with the entire team watching. Since his arrival, Sirianni has stressed competition so it’s not surprising to see him toss these activities into his practices. It’ll be interesting to see if they continue at training camp.

3. Jordan Mailata and Andre Dillard are in a competition for the left tackle spot, but Mailata has lined up there on both days reporters were present. Dillard was not at practice on Friday, so Mailata was there by default.

In any case, it’s amazing to watch Mailata these days. Early in his football career, he was so mechanical as he learned the basics of the game. Now, he looks so much smoother and you can just tell that muscle memory is taking over. I bet if he watched his rookie tape right now, he’d laugh.

Rookie second-round pick Landon Dickerson is recovering nicely but still isn’t participating in these drills. My guess is they start him at guard when he does.

4. The Eagles have a cool new ball security drill for their running backs. It’s basically a football on a string and a poke stick trying to separate the carrier from the ball. You can see RBs coach Jemal Singleton putting Miles Sanders through it here.

Last year, Sanders fumbled the football four times in 12 games, so anything to shore up ball security will be welcome.

5. I watched the defensive backs and how they lined up on Friday. In the nickel package (Craig James was absent), the Eagles had Darius Slay and Michael Jacquet as their outside cornerbacks, with Avonte Maddox as the nickel. Remember, it’s still just June 4.

I like the idea of Maddox back in his more natural spot inside, but I wonder if the Eagles are thinking about the possibility of playing him outside in their base and moving him inside on nickel.

6. With reporters watching, the Eagles’ offense ran just a handful of plays on air. They were in 11 personnel with Smith and Jalen Reagor outside and Greg Ward Jr. in the slot.

If Reagor has a good second season, this Eagles’ receivers room has potential.

7. I got out to the fields early in time to watch the specialists work. The Eagles have a new punter and Arryn Siposs is a big guy. He’s listed at 6-2, 212 and looks every bit of it.

As Siposs boomed punts down the field, new special teams coordinator Michael Clay was back to catch them. That’s a benefit of having a 29-year-old coordinator, I suppose.

Meanwhile, it looked like special teams quality control coach Tyler Brown was working with Jake Elliott, who kicked field goals off a tee. Brown is the son of Ravens’ kicking coach Randy Brown, who has worked with Justin Tucker for years. It’ll be interesting to see what kind of influence Brown has with Elliott.

8. Brandon Brooks is completely over his Achilles injury and he looks back to his peak form. Obviously, the guys are out there in t-shirts right now but there’s no doubt Brooks is moving well again. When the Eagles’ offense worked on air, there was a play on which he was to get downfield. It’s still impressive to watch a guy that big move that well.

10. Eagles owner Jeff Lurie, GM Howie Roseman, VP of player personnel Andy Weidl, newly promoted VP of football operations Catherine Raîche and others were at the Linc to watch the Eagles for the last time until training camp.