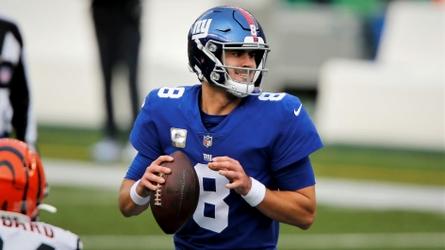 Giants GM Dave Gettleman and co-owner John Mara spoke on Tuesday about a wide array of topics, including the future of quarterback Daniel Jones.

Jones, who is entering his third year in New York, is currently under contract through the 2022 season. But his fifth-year option for the 2023 season has yet to be picked up. And what happens with that fifth-year option is likely contingent on how Jones performs this season.

“You know how diligent the kid is. We’ve talked about it all the time. He works just as hard on the field as he does off the field. He’s more comfortable, he’s more prepared, and it’ll be fun to see what happens when we finally get the full complement of players out there with him.”

Jones didn’t distinguish himself with the Giants last season, but he didn’t sink, either. And the fact that he was without Saquon Barkley most of the season and rarely had his full complement of wide receivers was less than ideal.

Entering the 2021 campaign, Jones should have a plethora of offensive weapons available to him, including Barkley — who could be ready for Week 1.

And as Jones works with those options at his disposal, Giants decision-makers will be determining whether he’s their guy long-term.

Is that something they’ll know definitively after the season?

“His decision-making is quicker out here (at training camp), he’s getting rid of the ball quicker. He’s throwing the ball well. He’s making progress like every other young kid and I think we’ll have a pretty good idea when the season is over.”

Speaking shortly after Gettleman, Mara weighed in on Jones’ future.