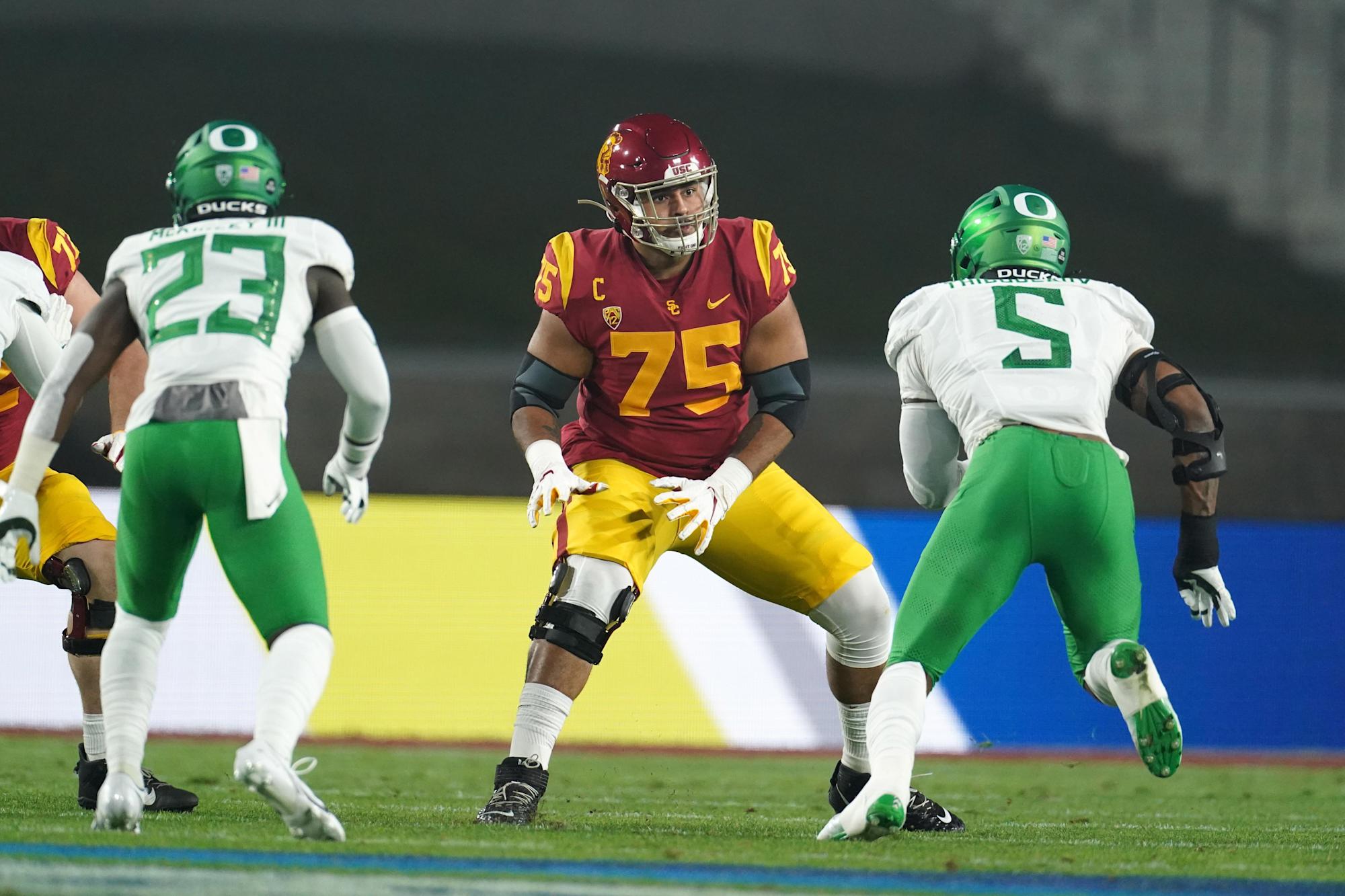 Earlier this week on 105.3 The Fan, exeuctive VP Stephen Jones spoke about trade interest in the Dallas Cowboys’ No. 10 pick, stating, “We’re starting to get a few calls, and I think it will only pick up as we get closer to next Thursday. It will only pick up.” With 10 selections in this years draft its likely the Cowboys do some moving around but the big question is would they be willing to move out of their first-round slot if it meant moving away from offensive tackles Penei Sewell or Rashawn Slater, or cornerbacks Patrick Surtain or Jaycee Horn.

Generally, when a team trades out of a pick they have a target group of players they would feel comfortable drafting from their new position. Who could be a target for the Cowboys? Greg Newsome, the corner from Northwestern could be in play. Maybe Micha Parsons the Penn State linebacker or Kwitty Paye the pass rusher from Michigan. One prospect who should be garnering much more conversation with the top players at their position is Alijah Vera-Tucker the OT/OG from USC.

Veer Tucker is from Oakland, California and attended Bishop O’Dowd High School. As a 4-star recruit he was the No. 10 OT prospect in the 2017 recruiting class according to ESPN. Veer-Tucker saw game action at both tackle and guard throughout his collegiate career. He started 13 games at OG in 2019 and spent the 2020 season as the starter at left tackle. The 6-foot-4, 308 pounder ran a 5.12 40-yard dash, had a 32-inch vertical, and he finished with 36 reps of 225-pound bench press at USC’s Pro Day. Tucker’s arms only measured in at 32-inches which for some teams will be an issue because it may not reach the benchmark some teams set for their offensive tackles. Tucker was a fun watch on tape giving the chance to see him play both spots. Tucker doesn’t have the longest arms but he is able to counter with good weight distribution and playing extremely centered. He also has an effective punch and displays quality hand placement. He routinely reworks his hands versus rushers and ties his hands with his feet to mirror the rusher keeping him away from the quarterback. Veer-Tucker has a wide frame and rarely gets beat around the edge. Vera-Tucker is an effective second-level blocker who gets out in front of the ball carrier and seeks out defenders to block. As a run blocker he is able to sustain blocks and create running lanes, but he move players with technique rather than natural strength. A wide-zone scheme would fit Vera-Tucker’s skillset best. He doesn’t get beat often but when he does he gives up some inside pressure when he over sets. He has Pro Bowl potential at either spot. Rashawn Slater and Penei Sewell are spoke about as the can’t miss offensive lineman prospects in this class and rightfully, so but Vera-Tucker belongs in the conversation.

The Athletic STRENGTHS: Balanced, agile blocker…stays patient and under control in his pass sets, settling his feet to mirror and stay square to rushers…relies on physical hands and strike timing to maintain spacing between defenders and his body…shows the functional strength to win hand battles and re-anchor…latches and generates movement in the run game…scoops defenders and turns/escorts them away from the play…alert eyes and processes things quickly to pick up stunts and delayed pressures…looks comfortable pulling and engaging linebackers at the second level…always looking for warm bodies to block and doesn’t let up until well after the whistle…his coaches rave about his mental makeup and competitive edge…starting experience at both tackle and guard. WEAKNESSES: Only average size and length by NFL standards for edge work…can be out-leveraged and “big-boyed” at times when rushers get underneath him…needs to consistently sink to create roots…will struggle to gain ground in his kickslide if he is late reacting to outside speed…will occasionally allow his hand placement to get wild, falling off his target…has only 19 career starts at the college level, including only six outside at tackle.

Alijah Vera-Tucker wont be an option if the Cowboys decide to stand pat and make at pick at 10, but if the Cowboys found a trade partner then its logical to believe they will have some interest in Tucker. If they were to draft Vera-Tucker, he would immediately be penciled in as a starter at left guard, replacing Connor Williams and solidifying the the front of the pocket along side second year player Tyler Biadasz and All-Pro Zack Martin.