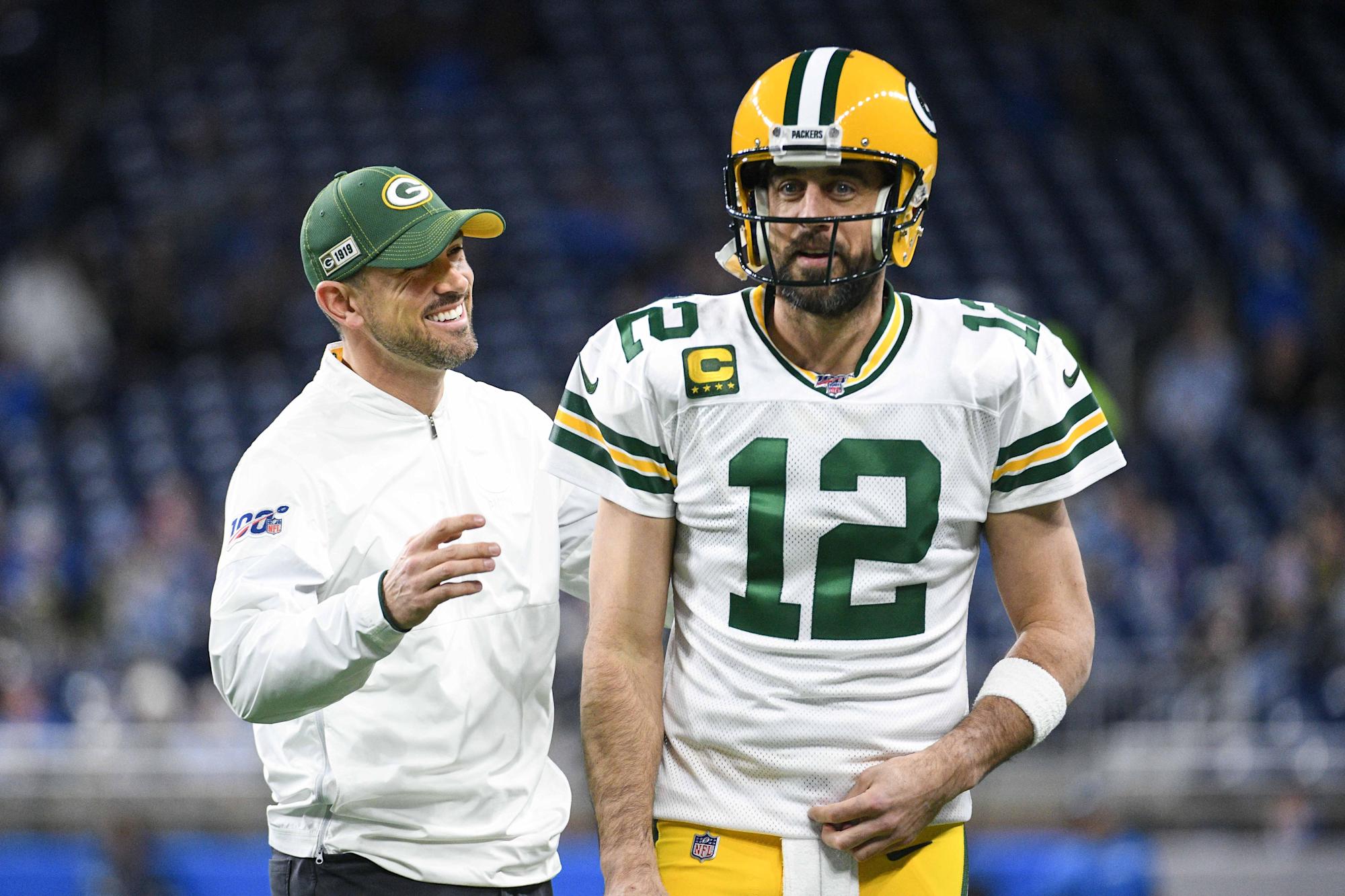 GREEN BAY, Wis. — Under normal circumstances, Green Bay Packers coach Matt LaFleur would have one of the best jobs in the NFL this time of year.

With just about everybody back on offense from a 13-3 team that went to the NFC championship game, an MVP quarterback entering his third season running the offense, new defensive and special teams coordinators on board and a nine-man rookie class of mostly Power Five conference players, the potential for success in 2021 would seem boundless.

But there is nothing normal about this offseason for LaFleur.

Quarterback Aaron Rodgers’ estrangement from the organization has put LaFleur in a limbo not of his own making and certainly not deserving of a guy who is 28-8 in his first two seasons as a head coach.

As best as anyone can tell, Rodgers’ beef is with general manager Brian Gutekunst, and depending on which insider report you believe, the chances of Rodgers wearing green and gold again are slim to negative if Gutekunst is around.

Maybe time or a Brink’s truck full of money will result in Rodgers reconsidering his stance never to play for the Packers again, but for now LaFleur must operate as though their road together has reached an end.

“I’m not going to make any assumptions about anything at this point,” LaFleur said Friday when asked if it was fair to assume Rodgers would not be on hand Monday when veteran players have the option of reporting for offseason workouts. “We’re just going to take it day to day.”

The Packers coach had just spent the last hour or so on Clark Hinkle Field watching two tryout quarterbacks throw passes to a group of rookie receivers, running backs and tight ends at the team’s rookie minicamp. It’s likely either Chad Kelly or Kurt Benkert will be signed to a contract after this weekend, but they are not the answer to who will be the team’s starting quarterback if Rodgers isn’t on the roster.

It’s very likely that 2020 first-round pick Jordan Love will report Monday along with newly signed veteran Blake Bortles for the start of Phase Three of the offseason conditioning program, but it’s assumed Rodgers won’t. Full organized team activity (OTA) practices begin May 24 and Love is going to be the first-team quarterback in Rodgers’ absence. If you’re LaFleur, there are a couple ways you can approach things.

One would be to go full speed ahead with the offense, assuming that Rodgers will return at some point and expect that Love, who did not have any on-field training last offseason because of the COVID-19 pandemic, will struggle to keep up and force the offense to function at a lower level for the veterans in attendance.

Another would be to start preparing Love to be the starter, which means tailoring the offense to the things he does well and eliminating some of the things Rodgers had in place that only a 16-year starter with a computer mind could pull off. It might mean scrapping some things he wanted to add this year and emphasizing the run more.

Asked if he would work with Love as though he would be the starter, LaFleur said yes. But he said it in the way that he might say it if he were asked about left guard or long snapper.

“I think every player on our roster has got to have the mentality they’re going to be the guy,” LaFleur said. “If not, when you do get your opportunity, you will not be prepared for it. So, that is always what we stress to every player on this football team.

“And, you know, football, unfortunately there’s some uncontrolled circumstances that can happen. And you might be one play away from getting your opportunity and in this league you might only get one opportunity. So, you better be prepared for that.”

From the NFL to Everest: Former WR Mark Pattison on verge of rare mountaineering feat

‘You get to be a Rambo player’: Cowboys first-round rookie Micah Parsons offers clarity on his role

Part of the preparation is making sure that if Rodgers isn’t there and Love isn’t ready yet – remember, both he and Gutekunst said when they drafted Love that he wouldn’t be starter-ready overnight – there is a veteran who could make enough plays to complement the running game and keep the offense moving.

It’s possible that Bortles, the No. 3 pick in the 2014 draft who has been looking for a job since spending half a season on Denver’s practice squad last year, could be that guy. Playing for then-offensive coordinator Nathaniel Hackett in Jacksonville in 2017, he had the Jaguars within 43 yards of a go-ahead touchdown late in a 24-20 loss to the New England Patriots in the AFC championship game.

“Blake’s familiarity with Hackett, with being in the Rams offense (as a backup in ’19) with a lot of carryover terminology and just his overall experience in this league (were attractive),” LaFleur said. “I mean, this is a guy that’s started a lot of games and has had a lot of success.”

The latter part can mostly be attributed to some of the ’15 season and most of the ’17 season. The rest of the time, he was an interception machine and his career 80.6 rating is a testament to how bad he could be.

But he is all that was out there at this juncture in the offseason and if Rodgers isn’t going to be around, Gutekunst must keep looking for someone better. Maybe Love will be better than anyone thought, but the Packers can’t go into the regular season without a better option than Bortles if Love isn’t ready.

Trading Rodgers remains the only viable option if he’s dug in as deep as some have reported. Draft picks won’t be enough in any deal because Rodgers will turn whatever team he goes to into a winner and push their future first-round selections into the 20s or higher, making them less likely to yield Pro Bowl players.

Any deal they make will have to require a quarterback in exchange.

Any way you look at it, LaFleur is caught in the middle and he has expressed as much to some of his coaching buddies around the NFL. After watching Gutekunst do his best to keep last year’s team together, the Packers coach knows he has the pieces he needs to get him over the NFC championship game hump if Rodgers is on board.

He’s so close he can probably taste it.

“We still obviously feel the same way,” LaFleur said. “We want him back in the worst way. I know he knows that, and we’ll continue to work at it each and every day.”

Ultimately, it’s out of LaFleur’s hands. Gutekunst and Packers president Mark Murphy are the ones who have to hash things out with Rodgers.

He must know this thing isn’t going to be settled anytime soon and his best bet is to teach to Love’s level and get him ready to start the season. He can always ramp things up later if Rodgers returns, but the best thing he can do now is put Love in a position to succeed and hope for the best.

Every season is different because rosters change so dramatically in the NFL, but somehow LaFleur must prepare this team for someone new under center. His priority, he said, isn’t adding new plays or concepts but regaining the groove the team had last year, which isn’t any easy thing to do with a new quarterback.

He has no choice but to prepare his team to play with Love and see where that takes him. It’s probably turned this into the hardest coaching job in the NFL, which isn’t the way it was supposed to be.