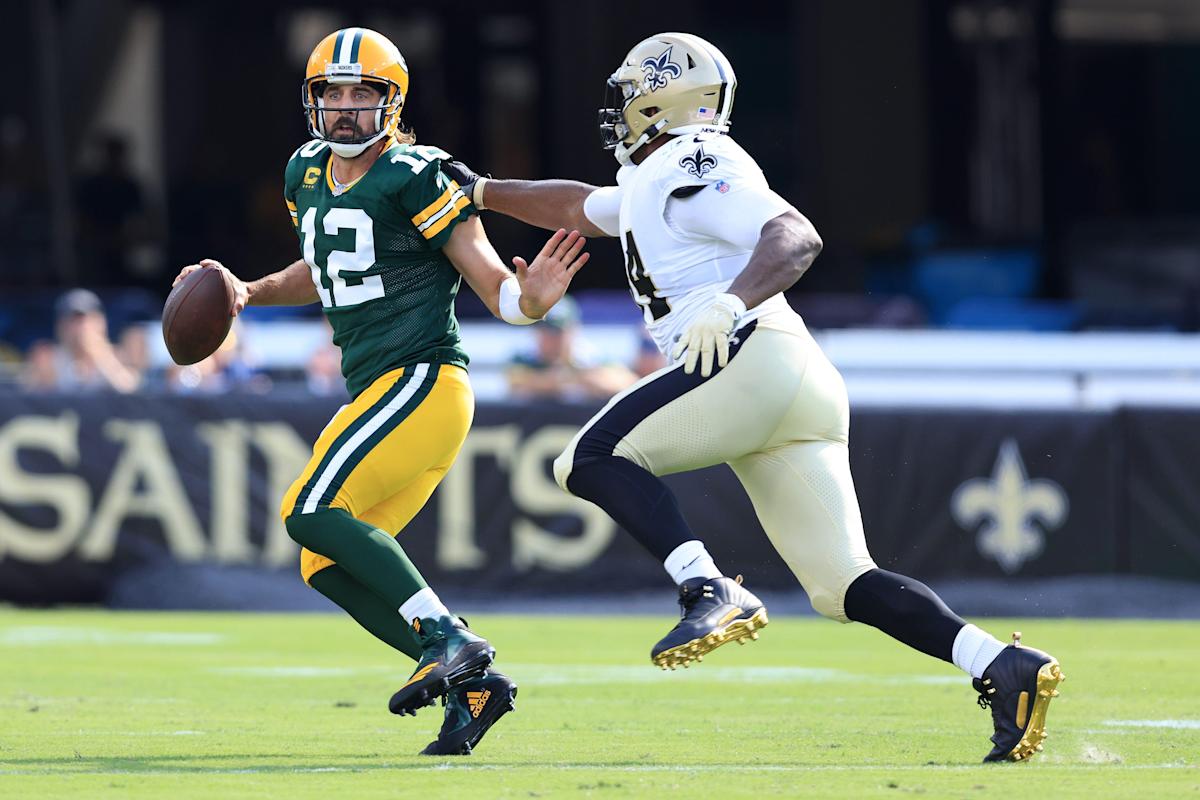 Two days after the Green Bay Packers were blown out in the season opener, Aaron Rodgers returned to “The Pat McAfee Show” and was open about the 38-3 loss, which included a “double nut shot” interception (his words).

Rodgers, wearing a Chuck Norris T-shirt that read “America wasn’t ready but he was,” is appearing on McAfee’s show every Tuesday afternoon on SiriusXM Radio to provide insight into the previous game in a relaxed atmosphere where f-bombs and expletives are used as frequently as a dart to Davante Adams between “a couple guys.” A.J. Hawk, Rodgers’ former teammate in Green Bay, is McAfee’s co-host.

Panic time?: Should the Titans be worried?

So what the hell happened in Jacksonville, McAfee asked Rodgers right out of the gate.

Rodgers said it “was one of those days” where if you play long enough you’re going to have one of those performances.

“We had one of those last year as well,” Rodgers recalled. “We’ve had a couple rough ones in Florida (Green Bay lost on the road to Tampa Bay 38-10 during the regular season in 2020).”

He said two-thirds of the text messages he received after the game reminded him that the Buccaneers also lost to the New Orleans Saints, 38-3, last year and won the Super Bowl. Rodgers said maybe that’s “trying to make chicken salad out of chicken (expletive).”

He said the offense was “bad,” and defensively “we couldn’t get off the field.”

“It was 17-0 and we’d run 12 plays,” Rodgers said. “One of those weird games where it seems like the clock is running the entire time. We had a good drive (to start the second half) and then I throw a pick.”

Yes, let’s talk about that interception. We know Rodgers doesn’t like to throw interceptions. Before Sunday’s game, he only threw 89 across 6,587 passes. That’s just one every 74 passes. In fact, he only threw two during the entire 2018 season. So what happened Sunday, especially that first one as the Packers were on the doorstep of scoring to start the second half, trailing at the time 17-3? Rodgers explained it wasn’t about anything X’s and O’s related.

“I don’t like to make a lot of excuses, there’s some (expletive) ones, there’s some ones you want to have to back,” Rodgers said. “That was due to the double nut shot I took.

“I guess I have to overcome that and throw a better ball. That was a painful one. They got their money’s worth on that one.”

Rodgers said he feels “good” Tuesday and added he doesn’t think he took many other shots in the game, for which he credited the offensive line.

He said the last time he wore a cup playing football was in the eighth grade. “Definitely thought about wearing” one again after Sunday, he added.

“Yeah, I do,” Rodgers said. “That’s why I’m back. Feel good about everything that we’ve done in the offseason. Training camp was solid. We had good practices.”

Rodgers called the loss “a good learning lesson for us.”

He also recognizes a game like Sunday allows everyone on the outside to second guess decisions made in training camp and preseason after the team got its (expletive) handed to it.

“Right now we’re taking it on the chin,” Rodgers said. “Pretty soon it will be flipped. I’m confident and excited and love these guys. I’m a competitor. This game is about how you respond to the negativity usually more than how you’re hailed for your successes.”