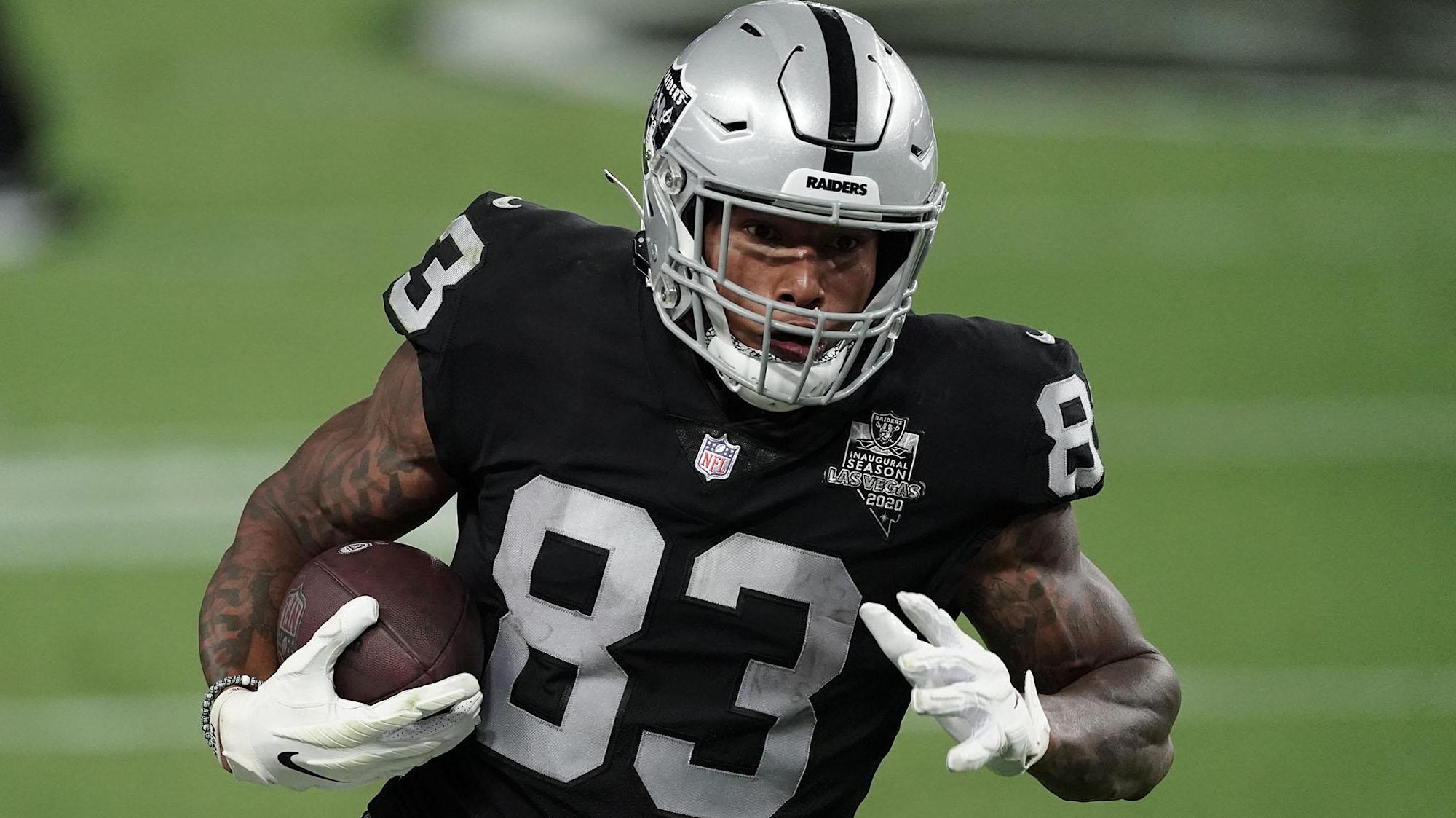 In 2018 John Gruden ended his nine year coaching hiatus with a 10-year $100 million contract. Entering year-four of that deal, Gruden is still looking for his first winning season since his return. The Raiders were 4-12 in 2018, and a solidly mediocre 15-17 over the last two seasons. Gruden’s return hasn’t been a disaster by any means, but it has yet to live up to price tag.

Gruden was initially pass heavy in his return to the sidelines, finishing 12th in pass rate in 2018. Since then, he’s committed to a balanced attack. In 2019, the Raiders drafted Josh Jacobs in the first round and have finished 25th and 23rd in pass rate over the past two seasons. No matter the game script, Gruden’s offense has been consistently slow paced. The Raiders have ranked 24th, 26th and 23rd over the past three seasons in situation neutral pace.

Derek Carr enters 2021 coming off a career high in adjusted net yards per attempt (7.53), after setting a career high in 2019 as well. He has finished as QB9 in ANY/A in each of the last two seasons, barley finishing behind Tom Brady in 2020. Carr is unlikely to be a fantasy difference maker for as long as the Raiders remain committed to leisurely establishing it, but he has emerged as a capable passer.

Carr also took a major step forward last season as a deep passer. After averaging 6.7 air yards per attempt in his first two seasons under Gruden, Carr jumped to 8.1 last season. This allowed Carr to support a mini-breakout from Nelson Agholor, who averaged 11.6 PPR points per game and 2.04 yards per route run.

The main question at wide receiver is if Henry Ruggs can pick up where Agholor (now in New England) left off. Ruggs’ prospect profile shows a ceiling not just to replace Agholor, but to be significantly better. Ruggs was selected 12th overall in the 2020 NFL draft, the first wide receiver in a loaded class. After a disappointing rookie season, it’s easy to feel like the Raiders simply over-drafted him when they selected him over Jerry Jeudy, CeeDee Lamb and Justin Jefferson. But Ruggs was viewed as a consensus early-mid first round pick. The Raiders happened to be in position to draft him first, but plenty of teams viewed him as worthy of a high-end selection. And it’s easy to understand why. Ruggs played his entire rookie season at 21 years old. He has 4.27 speed at 5’11” 188 pounds. And he was a playmaker as a true junior in the SEC. Concerns that Ruggs was a raw prospect were clearly legitimate, but Ruggs still has a ton of upside if he can put it together at the NFL level.

Ruggs should be aided by weak target competition at wide receiver. Bryan Edwards is the strongest bet to emerge as a threat to Ruggs’ WR1 status. Edwards, the Raiders third round selection last year, had a very productive senior season at South Carolina, but struggled through his rookie season with an ankle injury. He was eventually displaced in the offense by Agholor. This year he’ll take another run at the starting lineup. Edwards hasn’t generated much fantasy excitement this off-season, as he lacks Ruggs’ elite ceiling. But he actually bested Ruggs in yards per route run last year, and has the potential to emerge as strong secondary option in the offense.

Edwards’ main competition for snaps is 31 year-old John Brown. Brown is coming off a poor, injury riddled season where he averaged just 1.3 YPRR with Josh Allen as his quarterback. If Ruggs or Edwards is ready to take a step forward, Brown shouldn’t stand in the way. If they’re not, he could generate some spike weeks. But Brown is a poor bet to maximize his opportunities the way that Agholor did.

Hunter Renfrow will be manning the slot. Renfrow has been surprisingly productive since entering the league in 2019, and efficient while doing so. He’s averaged 1.9 YPRR over his two-year career. Renfrow is limited athletically to the slot however, and given that he turns 26 this year, it’s unlikely he has a big third year leap coming. He should help keep things on track, but won’t be a primary driver of the offense.

The engine of the Raider passing offense doesn’t play wide receiver, of course. He plays tight end. After entering the league in 2015 as sixth rounder, battling substance abuse issues so severe that they nearly ended his NFL career, and converting from wide receiver to tight end, Darren Waller‘s play over the last two seasons has been a revelation–and an inspiration. Waller’s 26% target share over the last two seasons trails only George Kittle among tight ends. Only Davante Adams, Michael Thomas, DeAndre Hopkins, Allen Robinson and Keenan Allen have higher target shares at wide receiver. Waller is a WR1 with tight end eligibility. Given Agholor’s vacated targets and uncertainty surrounding the quality of his replacements, it’s possible that Waller’s target share increases. Even if not, Waller is locked in as a truly elite fantasy tight end.

The Raiders selected Josh Jacobs in the first round of the 2019 draft with a plan to shift toward the run. They did just that, with Jacobs as their featured runner. Yet through two seasons, Jacobs has been a disappointment. The blame doesn’t fall solely on Jacobs. Coming out of Alabama, Jacobs profiled as a committee back with plus receiving ability. He was then promptly typecast as a two-down grinder. Over the least two seasons Jacobs is RB7 in rushing share, while just RB44 in target share. His 8% target share matches Nick Chubb‘s.

This year’s usage shapes up as more of the same. The Raiders signed Kenyan Drake to a 2-year $11 million contract in free agency. 2020 revealed Drake to be more of an early-down speed rusher than a receiving back, but Gruden has been clear that the Raiders see things differently, valuing him primarily for his receiving ability. I would argue that the Raiders have these roles flipped. Drake led Jacobs in NFL Next Gen’s success rate and in PFF’s breakaway percentage. Jacobs led Drake in elusive rating and in yards per route run. I tend to think a backfield works best utilizing a consistent gainer with breakaway speed in the ground game, and an elusive tackle breaker with receiving ability in the receiving game–but maybe that’s just me. As it stands, Jacobs and Drake are set to cannibalize each other’s production in 2021, and both appear miscast in their respective roles.

The Raiders also made the surprising decision to revamp their offensive line this off-season. RT Trent Brown was traded to the Patriots for a fifth round pick. That position will now be filled by Alex Leatherwood, the Raiders first round draft selection, widely seen as one of the biggest reaches in the draft. The Raiders traded C Rodney Hudson to the Cardinals for a third round pick. Andre James and Nick Martin will battle to replace him. Both project as downgrades. Starting RG Gabe Jackson was also traded to the Seahawks for a fifth round pick. RG will likely be manned by Denzelle Good or John Simpson. Good turns 30 in March and is coming off his first season as a full-time player. The Raiders drafted Simpson in the fourth round last season, and he played very little as a rookie. Richie Incognito will be at left guard. Incognito is 38 and struggled through injuries last season. The Raiders do at least have a strong starter in LT Kolton Miller, who is emerging as one of the better young tackles in the league. Overall this unit is a major question mark.

The situation isn’t helped by the Raiders schedule, which Warren Sharp ranks as the most difficult in the league. This makes Jacobs a particularly dangerous pick. Expensive two-down rushers in negative game scripts are what gives the dead zone its name.

Given the aforementioned schedule difficulty and offensive line concerns, this is shaping up as a potentially rough season for the Raiders. Ultimately, that might not be a bad thing for all of their receiving weapons. Gruden loves to keep his offense balanced when he has the choice, so a healthy serving of garbage time could actually be helpful for Waller, Ruggs, Edwards, or even Drake as a check down option. But it’s generally good practice to target offenses who, you know, score points. So Raiders stacks look risky, despite the low cost to complete them.

The Raiders win total reflects this pessimism. PointsBet has the Raiders over/under at seven wins. In a 17 game season, things need to get pretty ugly for Las Vegas to hit the under. But I think there are more realistic downside scenarios here than magical underdog stories. Seven looks like the right number to me, but if forced to choose, I’ll take the under.