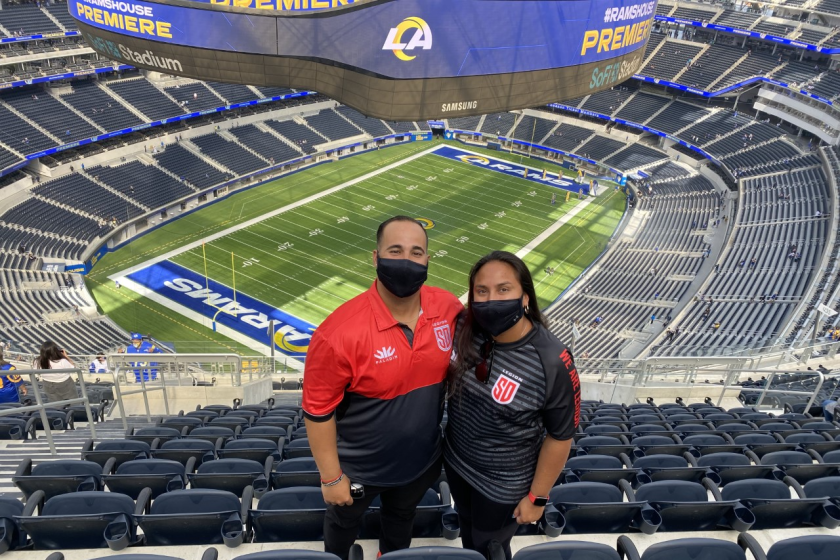 From his seat in the stands high above the field, Alfredo Lopez marveled as he took in the surroundings at SoFi Stadium for the first time.

After the COVID-19 pandemic prevented concert and sports fans from attending events at the $5-billion Inglewood stadium in 2020, Lopez was among the estimated 20,000 season Rams ticket holders who sat in their seats for the first time on Saturday. Fans were allowed into the stadium in six groups during the daylong preview event.

“The view’s amazing,” Lopez said. “I like the angle. I get the whole field unobstructed. I bought the seats back in 2018, so I get to finally see the finished product.”

With the addition of new quarterback Matthew Stafford and receiver DeSean Jackson, the Rams are aiming to advance to the Super Bowl LVI, which will be played Feb. 13, 2022 at SoFi Stadium.

Many of the fans who attended Saturday’s event were just happy to see that what had once been only virtual sight lines were now reality.

Ara Ishkhanian of Burbank said he has been a season-ticket holder since the Rams returned to Los Angeles from St. Louis in 2016.

It was ‘breathtaking” to walk into the stadium, said Victor Barajas.

“They built this very vertical,” he said, “so it seems like you’re close to the field no matter where you’re at.”

“By far the top stadium that I’ve been to,” he said, motioning toward the giant circular video board.

Mark Bennett Jr. of Carson has been to other stadiums, but he said, “I’ve never seen anything like this before in my life.”

Neither had his father.

“When I was growing up, I didn’t go to lot of football games,” Mark Bennett Sr. said. “But my son, he called me and said, ‘Hey, Dad, I’ve got season tickets.’ So I’m happy to be here — I can’t believe my son is taking his dad to games…. I feel like a super kid in a candy shop.”

Kevin Demoff, the Rams’ chief operating officer, visited with fans and posed for pictures. Demoff said it was emotional to see Rams fans in a home stadium for the first time since the last game of the 2019 season, the last of four seasons at the Coliseum.

“This is a stadium built to create memories and [Saturday] is the first for them,” Demoff said. “It’s great to share in that moment.”

Quarterback Jared Goff, the No. 1 pick in the 2016 NFL draft, was the face of the franchise when construction began on the stadium. The Rams gave him an extension that guaranteed a then-record $110 million before the 2019 season.

But in January, Goff was traded to the Detroit Lions for quarterback Matthew Stafford.

Goff was “an unbelievable ambassador” for the Rams, Demoff said, citing his work in the community and leadership in the team’s run to two division titles and a Super Bowl.

“These fans, this stadium, all of that wouldn’t be possible without his efforts on and off the field and I’m so appreciative of everything he did for us and the organization,” Demoff said, adding, “Wish him the best of luck in Detroit.”

Demoff said he had no regrets about giving Goff an extension after his third season.

“We made the best decision at that time that we thought made sense for the Rams,” he said, “and ultimately things change.”

Star defensive tackle Aaron Donald also will be a main attraction. On Friday night, an attorney whose client had accused Donald of assault in Pittsburgh, said he apologized after a video showed that Donald was mistakenly identified.

“We’ll just continue to let the story unfold the way it is, and we’ll see what happens back there,” Demoff said.

The Rams are scheduled to begin their offseason program on Monday. Like many teams, Rams players have said they would not participate in the in-person voluntary team activities.

Demoff said coach Sean McVay had been planning for a virtual program for the first month, and that McVay was in frequent contact with the players’ leadership committee.

“As long as they’re on the same page, I’m good,” Demoff said.