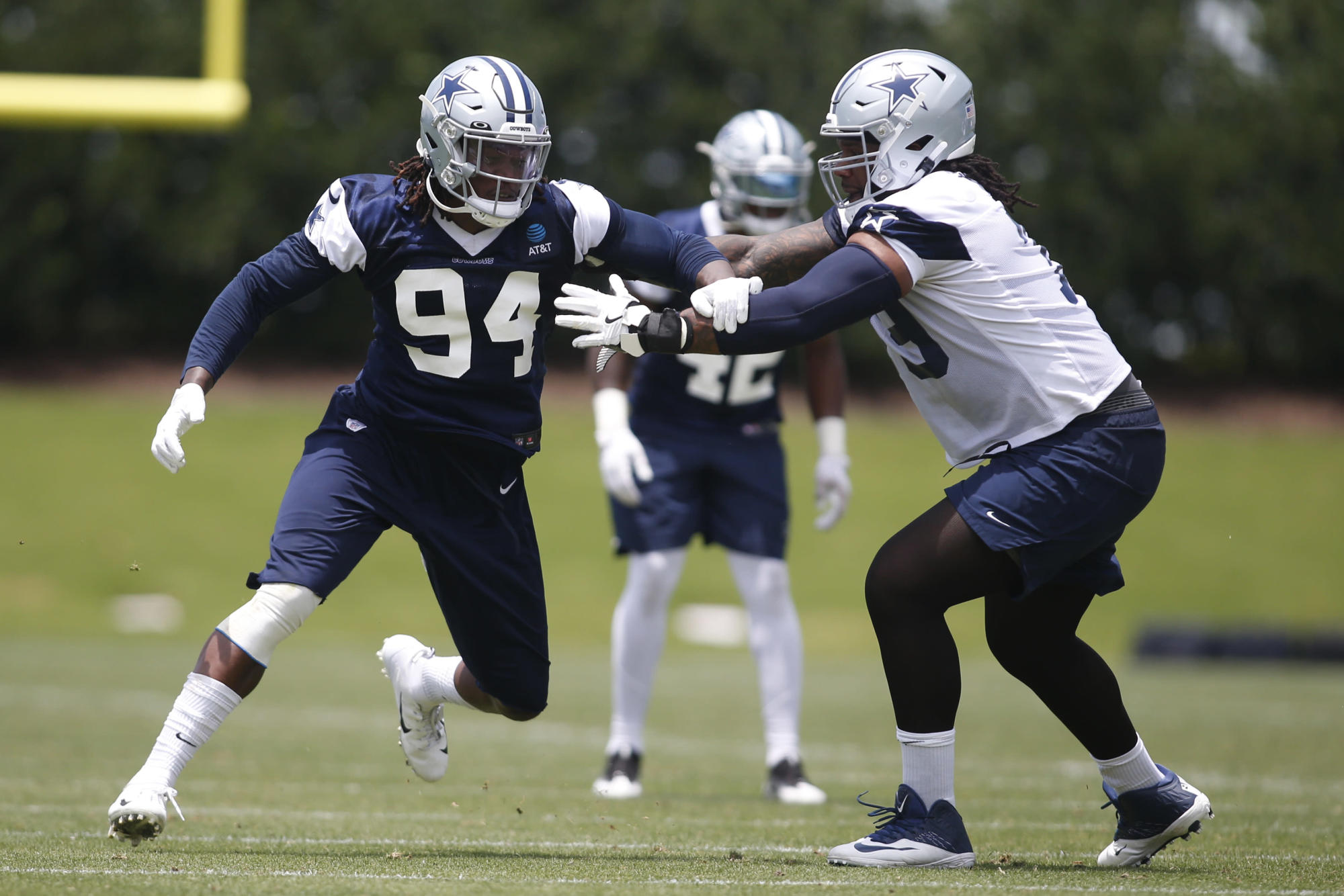 Several Cowboys players aren’t waiting around to make moves. Tight end Dalton Schultz may be pressing to keep the starting job as Blake Jarwin continues to work his way back from an ACL injury, and Randy Gregory appears to be putting on a clinic at defensive end, prompting a former player and coach to predict an All-Pro campaign for the veteran still on the comeback trail. Maurice Canady is finally getting his Cowboys career started after opting out of 2020, Ben DiNucci is gunning for the primary backup quarterback job, Connor Williams is taking snaps at center, and a new cornerback has been welcomed into the fold.

Plenty more tidbits from camp to start a new week, too. Fans in Oxnard hoping to catch a glimpse of Amari Cooper and DeMarcus Lawrence may have to wait, Troy Aikman stopped by practice to share his expectations for the 2021 offense, Noah Brown and Sean McKeon get the player-profile treatment, slick grass during morning practices may become an issue, and Dan Quinn could become a breakout star when the Cowboys hit HBO. All that, plus a look at the remarkable Hall of Fame journey of Cowboys safety Cliff Harris, and Dez Bryant may not be done quite yet. Here’s your News and Notes.

Link Randy Gregory has been “unstoppable” thus far in training camp, says 105.3 The Fan’s Mike Fisher. Former Cowboys running back and coaching assistant Phillip Tanner is predicting an All-Pro season for the veteran defensive end if the current coaching staff can simply “get out of Randy Gregory’s way.” As at least one Dallas offensive personality reportedly said of No. 94, “We can’t block him.”

Practice Points: Another big day for veteran TE :: The Mothership

Link If Blake Jarwin thought he would resume his place as the unquestioned top tight end in Dallas, no one told Dalton Schultz. “On Sunday, Schultz had arguably his best practice of camp and one of the best days by any player at any position,” the team website reports. Jarwin is still working his way back into full team drills after an ACL injury last season.

Link The Cowboys signed free agent cornerback Kyron Brown on Sunday. Brown spent the previous two seasons in the Jets’ organization. The move does not mean the team is no longer interested in safety Malik Hooker; there is expected to be a signing once the former Colt clears COVID-19 protocol.

Maurice Canaday back on field with Cowboys after missing 2020 for COVID-19 reasons :: Dallas Morning News

Link The onetime Ravens cornerback was one of 66 NFL players to opt out of the 2020 season due to COVID-19 concerns. Despite having just signed a one-year deal in Dallas, a newborn at home was too great a risk for the former Virginia Cavalier. Now he’s vaccinated and back with the team, competing for a roster spot in a crowded defensive backfield. “I can only control what I can control,” Canady said. “Your play will speak for itself no matter how many numbers are in there.”

Amari Cooper, DeMarcus Lawrence not expected back for Cowboys until after 2nd preseason game :: Cowboys Wire

Link Amari Cooper and DeMarcus Lawrence were placed on the PUP list prior to the opening of camp in Oxnard. Team owner Jerry Jones says neither is expected to return to action until after the Cowboys play their second preseason game in Arizona and return home to Dallas.

Slick turf during morning practices proving to be an issue in Oxnard :: Michael Gehlken (Twitter)

Been a lot of slipping on Cowboys’ practice field so far in camp. As if getting past LT Tyron Smith wasn’t difficult enough. pic.twitter.com/AAaza52TDQ

Link Fifth-year receiver Noah Brown flies under the radar on the Dallas roster, garnering nowhere near the attention that position mates Amari Cooper, Michael Gallup, and CeeDee Lamb do. But the unsung hero looks to once again be an integral part of the Cowboys’ special teams attack and a key piece of the pass-catching rotation for Dak Prescott.

Play of the day would have been this bomb to Michael Gallup, but Dak put the ball a little too long.

I asked Mike if he let Dak hear about it. He said “to be honest, he let’s me know before I have to say anything. ‘That’s on me.’” pic.twitter.com/wIKf4mWEN0

Connor Williams taking reps at center, should Tyler Biadasz be worried? :: Inside the Star

Link Williams saw reps at center during the team’s spring practices and again during the first few days of training camp, Jess Haynie points out. But according to coach Mike McCarthy, the former Longhorn is merely being evaluated as a potential backup at the position.

Link After Jason Witten rode off into the sunset, Blake Jarwin and Dalton Schultz raced to fill the tight end void in Dallas. But behind them, former Michigan Wolverine and 2020 undrafted free agent Sean McKeon is fighting just to keep his locker. Special teams may be his best shot at sticking with the team; he’ll be competing against veteran Jeremy Sprinkle, former college teammate Nick Eubanks, and TCU’s Artayvious Lynn.

Why Dan Quinn is going to rule HBO’s ‘Hard Knocks’ :: Blogging the Boys

Link Dave Halprin takes a deeper dive into that Run-DMC note-taking exercise defensive coordinator Dan Quinn tried with his players recently, with rookie linebacker Micah Parsons giving his take on what he learned. Based on his entertaining nature and player-friendly coaching methods, Quinn could be a breakout star of sorts on the HBO series that kicks off August 10th.

Link Three-time Super Bowl champ Troy Aikman stopped by Oxnard for a first-hand look at his former club. Aikman says he expects the Cowboys to be one of the most explosive teams in the league, with a defense that’s improved enough over last year to earn them “a lot” of wins. As for Dak Prescott’s surgically repaired ankle, Aikman thinks it may be even stronger than his other one, given all the internal hardware it now features.

Link Among the new inductees in the Pro Football Hall of Fame next week will be former Cowboys safety Cliff Harris. The player nicknamed “Captain Crash” took the long way to get to Canton, going undrafted out of tiny Ouachita Baptist University in Arkansas. During the Vietnam era of the 1970s, Harris often juggled National Guard duties throughout the week and then rejoined his teammates for game days. Over his ten years in Dallas, Harris went to five Super Bowls and six Pro Bowls.

Dez Bryant has faith he’ll ‘be on a roster soon’ :: Ravens Wire

Link Dez Bryant remains a fan favorite for much of Cowboys Nation, despite not wearing the star since 2017. Following a 2018 comeback in New Orleans that ended in injury and a 2020 stint in Baltimore, the wideout took to Twitter to express faith that he’ll join another NFL roster soon. He also posted video of a pretty ridiculous one-handed catch he made in a recent workout session.