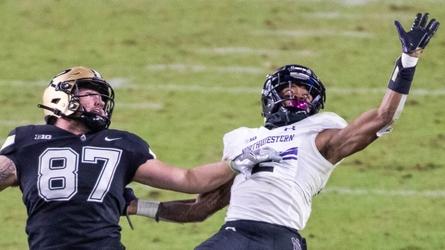 Just one day remains before GM Joe Douglas and his staff are huddled up in the war room getting prepared for the first round of the 2021 NFL Draft. The preparation has been done and double checked, as seeing how the draft board shakes out becomes the only thing left to decipher.

The Jets have certainly been up and down their current depth chart and gone through all every hole they might need to fill for new head coach Robert Saleh. Douglas will have a multitude of picks to go through — 10, to be exact — to create depth and competition heading into next season.

With that in mind, here’s what positions the Jets should be focusing on in this year’s draft (other than filling their QB void with Zach Wilson)…

Doing our own depth chart deep dive, the Jets could really have an open competition for starting corners in Saleh’s defense next season. The favorites are currently Bless Austin and Bryce Hall, though both have flaws in their game that need to be corrected. Plus, neither has showcased No. 1 corner material just yet.

LaMarcus Joyner joined the Jets in free agency, but he’s their slot guy. Adding a corner, possibly at No. 23 overall with their second first-rounder, could be the move. But Douglas may want to get even more.

Side note: Don’t forget Richard Sherman is still a free agent that performed well with the Niners during his time with Saleh. Adding a new No. 1 rookie with Sherman could be a solid tandem next season.

You can make the argument that the Jets need O-line more than anything after drafting Wilson. Of course you’d want to protect your hopeful franchise quarterback for years to come.

Douglas added a new face in former Charger Dan Feeney already to potentially play guard. But other than Mekhi Becton at left tackle, and probably Connor McGovern at center, there’s question marks as to who will start Week 1.

The Jets liked what they saw from Alex Lewis, so a new deal came his way. But is George Fant the answer at right tackle? Could the Jets want to try something else at guard? Nothing is certain, especially not with a new coaching staff, so I’d be smart to get some new faces in the trenches.

Shaq Lawson is a big upgrade off the edge for Gang Green, and Saleh should have some fun with him given Quinnen Williams and Sheldon Rankins in the interior will be getting good attention from O-lines all season.

But Jabari Zuniga is still a project off the edge, and the rest of the group is more depth than anything. Could that second-round pick turn into an edge if one falls out of the first round? Saleh’s influence could easily say so.

Maybe even the first round…

Mike LaFleur‘s offense needs a solid running back, or a few, that can execute it’s zone runs and pass-catching opportunities out of the backfield.

Can Tevin Coleman and La’Mical Perine be trusted to do that?

Look for the Jets to take a running back by Round 3 the latest to solidify the backfield, and potentially bring in someone that takes over the starting job.

The Jets have been waiting for Chris Herndon to live up to his “steal” mark he got three seasons ago when he came out of Miami. It just hasn’t been able to develop.

Tyler Croft and Ryan Griffin are good additions, too, but haven’t shown too much in recent years. A mid-round pick that could be a good, two-way addition would do the Jets good to get fresh blood in the mix that can make an impact right away.