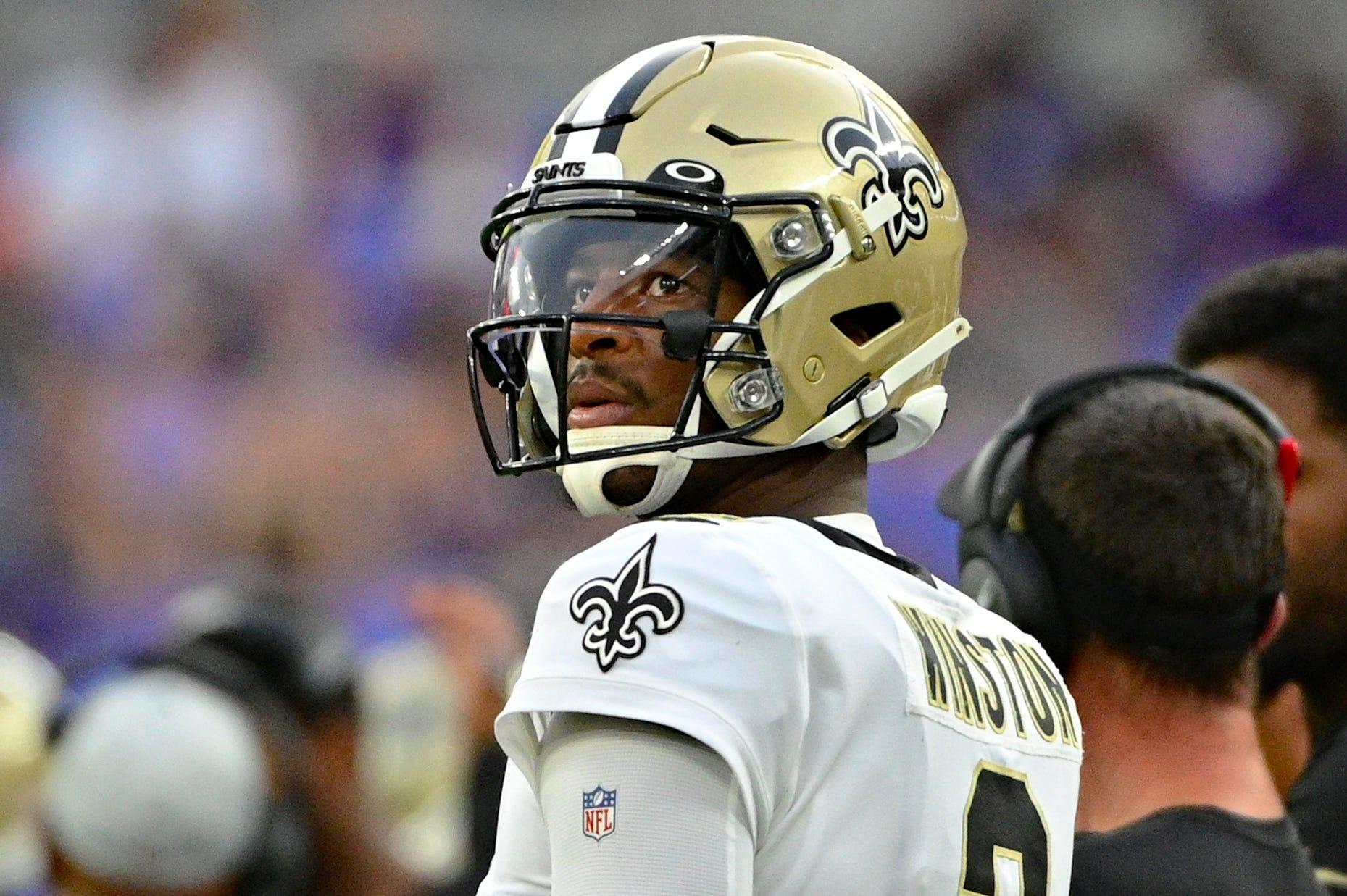 BALTIMORE — Jameis Winston didn’t care what unit he found himself on as the New Orleans Saints opened the preseason Saturday night in Baltimore, or which little-known wide receivers he had at his disposal.

Entering his seventh NFL season and the second of his redemption quest with the Saints – a journey that he hopes leads him back to a starting role in the NFL – the 2015 No. 1 overall pick just counted himself blessed to have another opportunity to suit up and get on the field.

Saints coach Sean Payton had given Taysom Hill – Winston’s competition for the job of succeeding the now-retired Drew Brees – the first crack at starting as New Orleans faced hosting Baltimore. And that meant Winston’s audition would come while playing with backups, which can present its share of challenges.

But mismatched lineups, limited game-planning, and even rampant miscues by the Saints as a whole couldn’t dampen Winston’s zeal.

“It was fun being out there just competing against another team,” Winston said after his team lost 17-14 to Baltimore after committing a total of six turnovers (which infuriated Payton).

“We’re getting the opportunity to play football,” Winston continued. “I was so glad to be out there with whoever… We saw the great things we did and we know the other things we need to fix to be a great team.”

Winston and his second unit did turn in mixed results. He directed two scoring drives, throwing a touchdown pass on the second, but he also threw an interception, his running back lost a fumble and the unit also had to punt.

Fortunately for Winston, Hill also turned in an uneven performance. After opening the game by completing four of his first five pass attempts, his first series also ended with a fumble by running back Latavius Murray at the Baltimore 9. Then Hill threw an interception, had a would-be INT dropped on the next possession and after taking a bad sack, New Orleans had to punt.

So, with neither Hill nor Winston turning in an authoritative, statement-like performance, the Saints head into Week 2 of the preseason with just as muddled a quarterback picture as they had back when Brees officially retired in March.

Payton wanted no parts of quarterback competition talk after the game.

“Look, I’m not making any comparisons with the quarterbacks right now,” he said. “It doesn’t matter really with six turnovers, right?”

Eventually, the coach will need one of the two to separate himself. But settling on a starter might prove a little more challenging than anticipated. Thus far in practices, Hill and Winston have reportedly looked solid, yet unspectacular. And Saturday night, little changed.

But Winston has opted for the approach where he refuses to flinch and instead focuses on controlling what he can control while striving to seize every opportunity he receives.

Hill is doing the same.

“The talk of competition is right here,” Hill said, motioning to the four walls of the visiting press conference room. “I think, for me, it’s going out there and playing my best football every night. I don’t like when things don’t go well, whether I’m in a competition or not.”

Hill and Winston have the right approach, but it remains to be seen if they have the ability to overcome the areas of weakness that have relegated them to backup roles.

Hill has made a name for himself the last three seasons as a Swiss Army Knife player for Payton – a fierce competitor willing to line up everywhere from tight end, to fullback and wide receiver with a few quarterback snaps sprinkled in. He’s a challenge for opponents to game-plan for. Yet, thus far in his career, the former BYU product has shown that he has limitations in a full-time quarterback role.

But here he is, competing with Winston, who showcased his cannon of an arm in five seasons as a starter for Tampa Bay. But Winston also is known for turning the ball over, especially in 2019 when he threw 30 interceptions to offset 33 touchdowns.

Each has worked hard this offseason to perfect their craft, but on Saturday, they showed inconsistencies remain an issue.

Payton is regarded as one of the best coaches and most creative offensive minds in the NFL. Last year, he managed to go 3-1 with Brees injured and Hill as his starter with Winston sprinkled in here and there. The year before, he went 5-0 with Teddy Bridgewater starting in place of an injured Brees.

So Payton certainly can scheme up creative enough game plans to make the Saints competitive regardless of his quarterback choice. But the Saints also are used to contending, not just competing. Can the Saints really remain among the NFC leaders behind Hill, whose accuracy traditionally drops off significantly when forced off of his first read, or Winston, who has always gambled and guessed too much?

Will their respective limitations force the coach to opt for a platoon duty at the most important position on the field?

The next few weeks (two more preseason games and the week leading up to the season opener) represent a crucial window for both quarterbacks.

“We have some things to clean up, and we have some time,” Hill said, “but there’s a sense of urgency.”

There’s an old adage, “If you have two quarterbacks, you have none.”

The Saints certainly hope that football proverb doesn’t apply to them. But they’ll need Winston and Hill to further elevate their games.