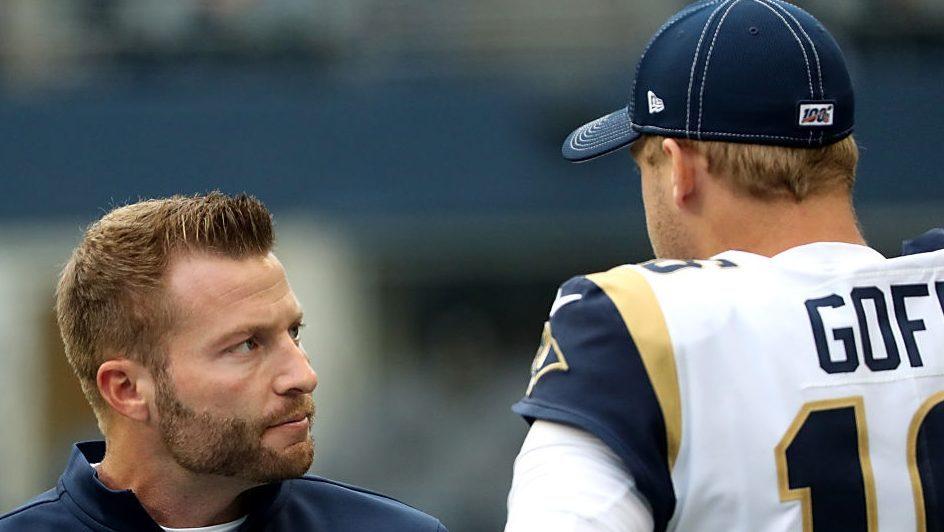 Two days ago, Rams coach Sean McVay made it clear that he’s thrilled with his upgrade from Jared Goff to Matthew Stafford before chastising the media for accurately repeating and commenting on the content, tone, and tenor of McVay’s remarks. Two years ago, McVay went with something that seems, in hindsight, even more outlandish.

June 2019. That’s when the Rams had yet to sign Goff to a long-term, big-money deal and when McVay inadvertently was jacking up the eventual price by praising Goff incessantly — and by shouting down the notion that the Rams shouldn’t extend Goff’s contract after only three seasons, waiting one or two more years before making a final decision about whether to keep him or to move on.

Someone (me) was arguing loudly that the Rams shouldn’t simply give Goff a market-value deal simply because he had landed on the pass side of the basic pass-fail question as to whether the first overall pick in the 2016 draft was a bust. Goff thrived in McVay’s system; why pay Goff more than $30 million per year when other quarterbacks are out there, younger and cheaper and possibly better suited to running the Rams Offense?

Here’s a question McVay got during a sit-down with Fred Roggin of NBC’s L.A. affiliate (and, yes, I’m the pundit to whom Roggin was referring), as posted here exactly two years ago today: “I don’t know how often you check online and care what the pundits say. One suggested that, you know, the thing about Jared Goff is there will be a point in time when you’re just going to get rid of him because you’re gonna bring somebody in here who’s younger who will be your kind of guy. Now to me I thought that was insane . . . because you’ve developed him into one of the top quarterbacks in the game.”

Here’s what McVay said in response regarding Goff.

“He’s developed himself into [one of the top quarterbacks in the game], and you know we’ve been able to work very well together over the last couple years. I can assure you, that is not going to happen. He ain’t going anywhere. And he’s just continuing to get better. He’s coachable. He’s a young guy that’s just continuing to grow. But the talent, the makeup that he has. I think one of the best traits is mental toughness.

“I mean, clearly, he’s the No. 1 overall pick for a reason. He’s got elite ability to throw the football from different platforms. He can make all the throws. But I think what really is special about him is the way that he’s wired mentally. He’s got an elite mental toughness. An extreme security in himself that doesn’t ride the wave of the inevitable ups and downs that you face as a quarterback. And I think he’s so authentic and genuine. His players love him. You look at the way that his Cal teammates, how excited they were when he was the No. 1 overall pick. You look at the way that his teammates respond to him here. And he’s just getting better and better. I mean, this offseason he’s continued to take steps, truly becoming an extension of the coaching staff. And a huge part of our success as a team the last couple years is due to his leadership and we’re so thankful to have him and I agree, Fred, it’s insane to think that he’s going anywhere. He’s stuck with me as long as I have say.”

To McVay’s credit, he admitted the mistake. To McVay’s detriment, the mistake was very avoidable. I mean, if a hack like me saw it coming, one of the best coaches in the NFL should have recognized it, too.

And of course McVay is now happy that Goff (who was benched last year for John Freaking Wolford) has been replaced with Stafford. Again, the Rams didn’t trade two first-round picks and a third-round pick for Stafford. It was a one and a three for Stafford, and another first-rounder for the Lions to take Goff’s contract off the books.

McVay really is a great coach. But he blew it with Goff. And he blew it on Thursday, when he chastised the media for acknowledging the obvious excitement that McVay is now experiencing given that Goff is gone.