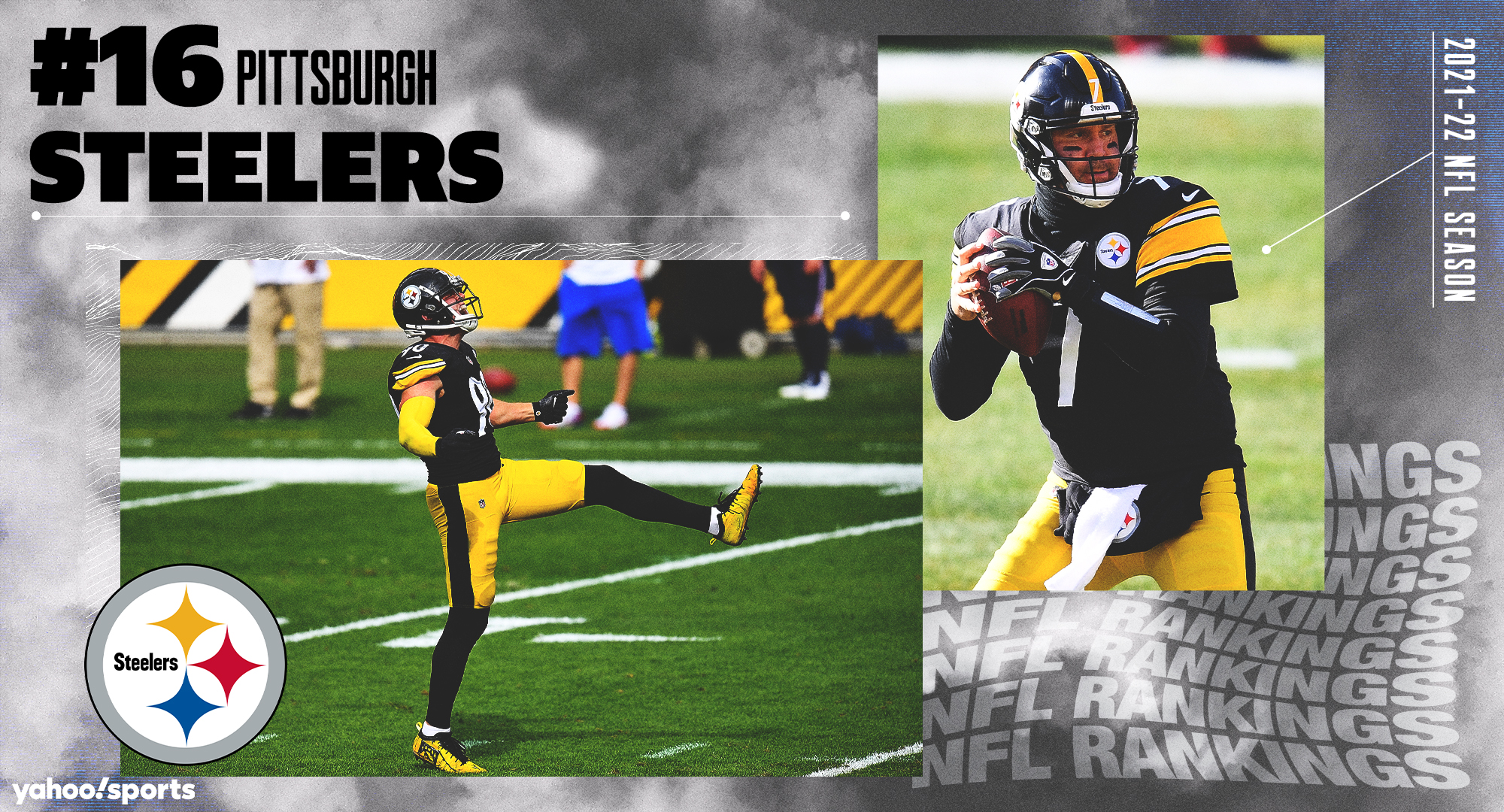 The Pittsburgh Steelers started last season 11-0. You don’t win 11 straight games without being a very good team. The Steelers were Super Bowl contenders.

The 2020 Steelers had a historic drop after such a great start. They went 1-5 after winning their first 11. The worst performance was a terrible Monday night loss to a bad Cincinnati Bengals team. The most memorable defeat was a 48-37 loss to the Cleveland Browns in the wild-card round.

A lot of things need to go wrong to finish 12-5 after an 11-0 start, but most of the attention went to Ben Roethlisberger.

Roethlisberger was coming off major elbow surgery to reattach three tendons, and for most of last offseason everyone acted like that wasn’t a big deal. For the first 11 games of the season, it really wasn’t a big deal. He played just fine and the Steelers were rolling. Then Roethlisberger started looking like a 38-year-old quarterback coming back from major elbow surgery. He struggled to throw the ball in that nationally televised loss to the Bengals, and everyone took notice.

When quarterbacks nearing 40 years old struggle to throw the ball, it’s hard to bet on a full rebound. After an offseason in which the Steelers played a bit of chicken with Roethlisberger’s contract before he took a big pay cut, Pittsburgh has a lot riding on age-39 Roethlisberger looking a lot better than he did at 38.

The Steelers had a top-three defense and that side of the ball should be very good again. There are very good receiving options, especially since JuJu Smith-Schuster didn’t get the mega-deal he wanted and came back to Pittsburgh on a one-year contract. The Steelers drafted running back Najee Harris in the first round to fix their woes in the running game. The offensive line is an issue, and maybe a bigger one than Roethlisberger, but the quarterback with the fading arm is going to get most of the attention.

How will Roethlisberger look? Nobody knows, not even him.

“I’d like to wait to answer that question the more we get into the season and see how it feels,” Roethlisberger said, according to The Athletic. “Right now it feels really good. My arm was healed, obviously, I played. It was healthy. But I think anybody that has a big surgery, it almost takes — like that first year back, you are back but are you really back and feeling great? That’s why I want to reserve to answer that question till we get into the season a little bit to let you know how my arm feels compared to last year.”

Everything comes to an end. Tom Brady changed everyone’s expectations about how long a quarterback can be effective, but Brady might be one of a kind. Usually quarterbacks Roethlisberger’s age are struggling or already retired. The elbow surgery — which Roethlisberger himself termed a “total reconstruction” — adds another layer of doubt.

Roethlisberger is a sure Hall of Famer, one of the greatest players in a storied Steelers franchise history. Through 11 games last season he looked like that player, elbow injury be damned. Then everything fell apart for him and the Steelers. After a tough offseason, there’s not a lot of faith in Pittsburgh bouncing back.

A lot of good things are in place for the Steelers. They have as many blue-chip players as just about any other team. The top four receivers of Diontae Johnson, Chase Claypool, Smith-Schuster and James Washington are fantastic. T.J. Watt is an NFL defensive player of the year candidate, and Minkah Fitzpatrick is one of the best safeties in the game. Stephon Tuitt and Cameron Heyward are excellent defensive linemen. They just need a 39-year-old quarterback with a surgically reconstructed elbow to rediscover his form. That’s a scary place to be heading into a pivotal season.

One reason the Steelers made no secret about their desire to restructure Ben Roethlisberger’s contract is they needed to get under the cap. There was no room for any big additions. Outside linebacker Bud Dupree, cornerback Mike Hilton, offensive linemen Matt Feiler and Alejandro Villanueva, running back James Conner and safety Sean Davis were among the players to leave. Center Maurkice Pouncey, a potential Hall of Famer, retired. The Steelers then lost six-time Pro Bowl guard David DeCastro to what appears to be a retirement due to ankle issues. Pittsburgh cut DeCastro in June, a big setback to an offensive line that was already the weakness of the team. Guard Trai Turner was signed to replace DeCastro at $3 million for one year, the biggest deal the Steelers handed out. The Steelers drafted running back Najee Harris in the first round, and while Harris is a fine talent, it was questionable to draft a running back in the first round when the offensive line is a mess. The big win of the offseason was JuJu Smith-Schuster coming back on a cheap one-year, $8 million deal. Other than that, it wasn’t good.

Over the past few years the Steelers made the same mistake many other teams do, using mid-round picks on quarterbacks. The hit rate is exceptionally low. Mason Rudolph, Joshua Dobbs, Landry Jones, even undrafted Devlin Hodges — none proved to be capable of replacing Ben Roethlsberger when the time was right. There’s still some hope that Rudolph can be a viable quarterback, but he has not shown that yet. Dwayne Haskins, the former Washington first-round pick, was added but he has a long way to go. When Roethlisberger, who is in the final year of his contract, is ready to retire or the Steelers are ready to move on, they’ll be starting over at quarterback or hoping Rudolph or Haskins turns a corner. It could be a tough transition.

The Steelers’ win total of 8.5 at BetMGM reflects that practically everyone thinks the Steelers will be worse this season. Pittsburgh won its first 11 games last season, and is now expected to hover around .500 in a 17-game season. It’s still a team with a very good defense and plenty of offensive playmakers. Mike Tomlin has never had a losing season. The line seems like a bit of an overreaction to a bad finish and a rough offseason. Take the over, though they might not beat it by much.

Pittsburgh’s defense ranked No. 1 in Football Outsiders’ DVOA last season. The defense was sound in every way, finishing third in yards allowed and third in points allowed. Outside linebacker T.J. Watt and safety Minkah Fitzpatrick were All-Pros, Cameron Heyward was a Pro Bowler and Stephon Tuitt had 11 sacks. The defense will miss Bud Dupree, who signed with the Tennessee Titans after posting eight sacks, and there are some questions at cornerback. But this is a defense that has many fantastic players and while it’s rare to repeat a top-five defensive finish, the Steelers should still be very good on that side of the ball.

Would Mike Tomlin be on the hot seat?

If you did a blind resume test, Tomlin is probably a Hall of Fame coach. He has never had a losing season, which is remarkable. But Pittsburgh is an intense football town, and it has been a long time since the Steelers won a Super Bowl. And all good things come to an end.

Tomlin has a fantastic .650 winning percentage over his 14 seasons, but the last number might be the one overshadowing everything else. After 14 years, fans get antsy. They think a coaching change will fix everything. The next coach the Steelers hire is unlikely to have more success than Tomlin, because very few coaches ever have replicated Tomlin’s success. But sometimes change is made to shake things up.

That puts Tomlin in a tough spot. He probably deserves more credit for his team figuring out ways to put an offense with a more limited Ben Roethlisberger and a bad offensive line in positions to succeed, but he gets a lot of blame for the collapse when defenses figured things out and Roethlisberger ran out of gas. This season, the issues with the offensive line and Roethlisberger might not be fixed, and the Steelers might take another step back. Then the same questions about Tomlin’s job security will come up. It’s not like it will be unexpected.

It’s possible Ben Roethlisberger looks better another year removed from elbow surgery. He has receivers around him to make him look good, and it’s possible Najee Harris gives the Steelers some balance. Roethlisberger did throw for 501 yards in the playoff loss last season with the Steelers in catch-up mode, so maybe the reports of his demise are exaggerated. The Steelers will have to work around Roethlisberger’s limitations, but it’s possible to have success in the NFL with a limited quarterback, good running game and a great defense. Pittsburgh seems to have faith in its in-house replacements on the offensive line, and maybe we should trust that. The Steelers were 11-0 in early December last year and many of the same reasons for that great start are still in place. Pittsburgh doesn’t have to go far to be Super Bowl contenders again.

We know what a long run with a great quarterback looks like when that QB falls off a cliff. It’s not pretty. Ben Roethlisberger was a good quarterback over the entirety of last season but bad at times near the end. What if Roethlisberger starts this season looking like Peyton Manning’s final season? Even the most optimistic Steelers fan has to admit that’s possible. It’s not like there should be much confidence in Mason Rudolph or any other quarterback option. For the Steelers to be good this season Roethlsiberger probably has to be at least average, and there’s a chance he won’t be. We could see a difficult season for Roethlisberger, a big drop for the Steelers and then a lot of offseason transition.

I don’t think Ben Roethlisberger will be bad, but the offensive line won’t help. The Steelers also play in a tough division and defenses often don’t repeat top-five seasons. I think the Steelers will be good enough on both sides to be in playoff contention most of the season, and maybe sneak into a wild-card spot in an expanded field, but I don’t figure they’ll be legitimate championship contenders. Pittsburgh is a model franchise that is seemingly always pretty good, but there are a lot more questions about the Steelers coming into the season than anyone is used to.