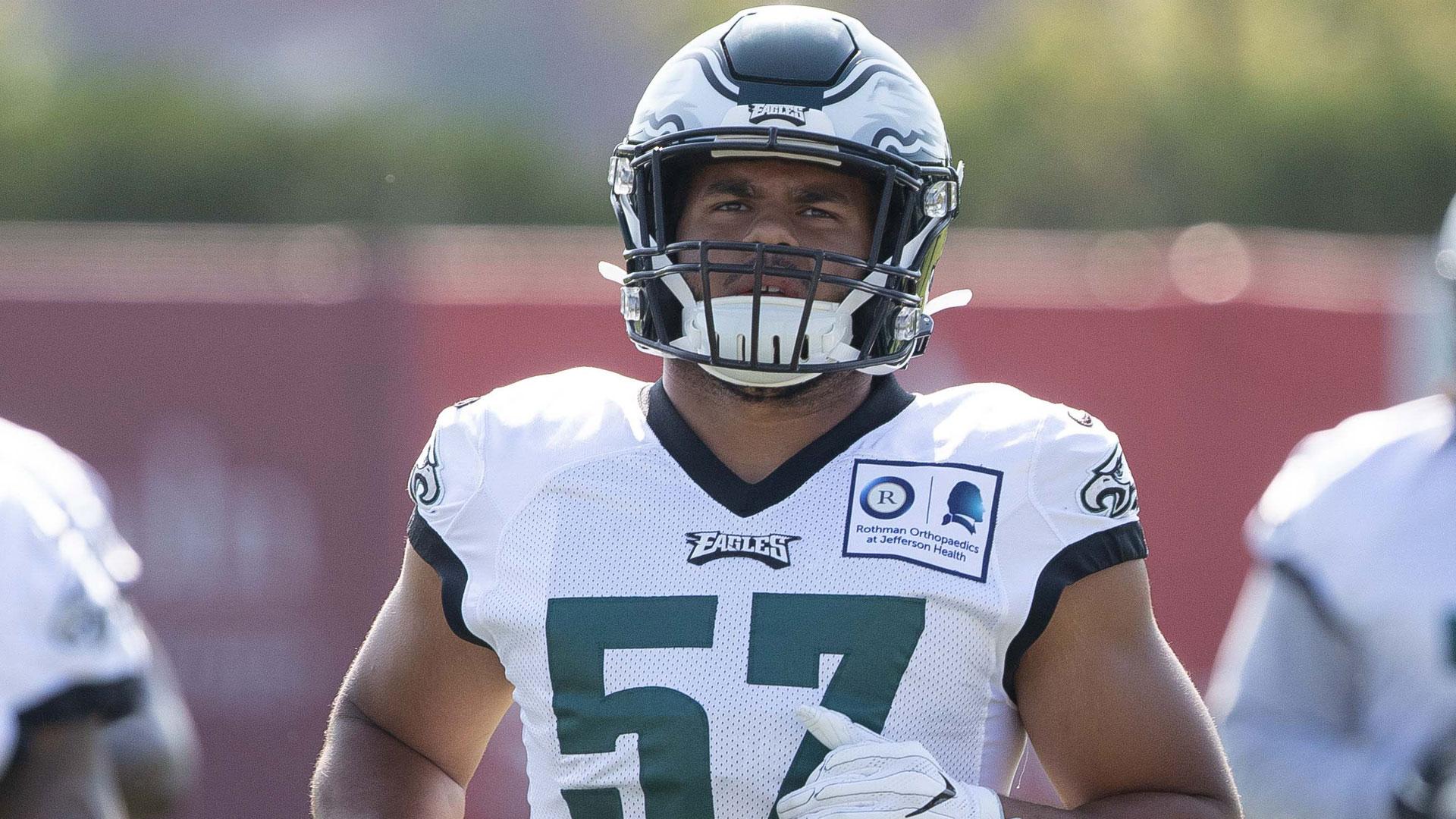 The Eagles had a rare evening practice on Saturday at the NovaCare Complex before a player day off on Sunday.

They’ll be back at it on Monday morning and they’ll be in full pads for the first time this summer on Tuesday.

Here’s what we saw from Saturday’s session:

1. DeVonta Smith missed the second half of practice and early word from the Eagles was that he was being evaluated for a leg injury. But they don’t think it’s serious. Even after he sustained the injury, he stayed on the field without a helmet as a spectator.

2. The play of the day came from third-year linebacker T.J. Edwards who dropped into coverage on 7-on-7s and picked off Jalen Hurts with a diving interception. Don’t think Hurts saw him. But it was a great play from Edwards, who isn’t really known for his coverage ability.

“First one in camp so it felt good,” he said. “Anytime you get your hands on the ball it’s a good thing. Just going to try to keep doing that and learn the defense and just keep stacking the days.”

3. I watched for a while as the Eagles’ running backs worked on a pass protection drill aimed to use leverage. It’ll be interesting to see if this new staff can help Miles Sanders improve that area of his game. He struggled with it last season.

4. There were some 1-on-1 drills between defensive backs and receivers on Saturday. Those are always fun:

• Reagor got separation on Darius Slay and beat him for a nice play the first time they matched up but Slay got the best of him the second time. He had sticky coverage and knocked a pass down.

• Greg Ward had one really nice rep against Avonte Maddox, beating him with a quick little inside move.

• Travis Fulgham got a half step on Steve Nelson but couldn’t haul down what would have been an impressive catch.

• John Hightower had an up and down day. He made some plays but he also struggled to track a deep ball and Nick Sirianni gave him an earful after it.

5. Zach Ertz had a great double move against Elijah Riley and Hurts hit him for a huge gainer down the left sideline. Ertz has had a pretty good camp.

6. While he did drop a pass later in practice, Jason Huntley keep ripping off long runs. The second-year running back definitely has speed and he’s been showing it off. He’s a dark horse candidate to make this roster.

8. Some quick notes from OL-DL drills:

• Andre Dillard continues to have a less-than-stellar camp. He was beaten by Derek Barnett on one rep and he had an OK rep against him the next time. But Dillard also gave up a sack to Josh Sweat during team drills.

• Jordan Mailata, meanwhile, was very good in 1-on-1s. He shut down Sweat and despite a nice move from rookie Tarron Jackson (who has some bend), he shut him down too.

9. Rookie Kenny Gainwell had a really nice catch in traffic during team drills. He continues to look a little more comfortable with each day. Easy to foresee a role for him in this offense.

10. Defensive tackle JaQuan Bailey had a nice pressure on Nick Mullens but actually hit the ball loose when his right arm came down on Mullens’ throwing arm. Good pressure but that’s a no-no. The quarterbacks wear red for a reason.

Stupid Observation of the Week: The Eagles began practice at 5:30 p.m. on Saturday and it was the nicest weather I can ever remember for a training camp practice. It was 81 degrees and breezy.