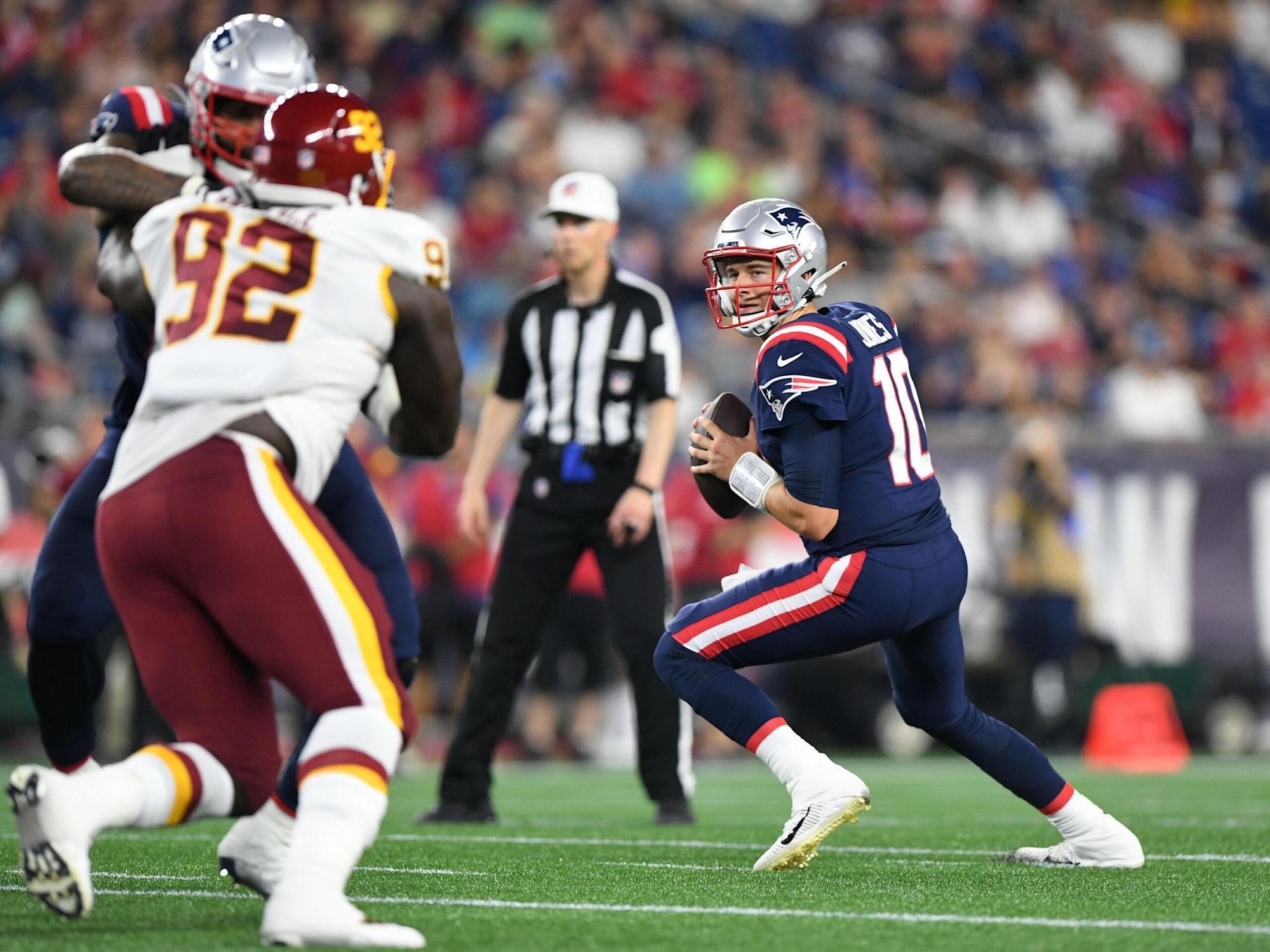 Ever since he took that long walk to the stage on draft night in Cleveland, New England Patriots fans have been clamoring for the first game action from rookie quarterback Mac Jones. After the organization drafted the Alabama passer with the 15th overall selection back in April, Patriots fans have been hoping that the Heisman finalist would be the key to New England returning to post-season glory.

After Jones’ debut on Thursday night against the Washington Football Team, you can forgive Patriots fans if they seem a bit happier than usual at the water cooler on Friday morning.

Jones took over from Cam Newton early in the game to give him action with the projected starters against Washington’s top-tier defenders, and played well into the second half. Jones finished the night completing 13 of 19 passes for 87 yards, and ended his debut without a touchdown or an interception. But those statistics are a bit misleading. Take, for example, this incompletion in the direction of Kristian Wilkerson along the left sideline:

This is a fantastic play from Jones. The Washington defense brings pressure and plays with a single-high safety look in the secondary. Jones trusts in the protection around him, stepping up in the pocket before dropping this throw into the bucket to Wilkerson. The pass falls incomplete, but preseason is about process, not results. The question to ask is this: Did the quarterback demonstrate a solid process on the play, and one that is likely to lead to good results when the stats count for real?

On this play, Jones certainly displays that process.

Now granted, teams are playing with vanilla schemes in the preseason, but this design — an aggressive, vertical concept — could be a window into New England’s thinking with Jones. As I wrote back in May, the Patriots might need to tweak their offense a bit to put the rookie into a familiar setting, given the offense he ran at Alabama. Incorporating more vertical-based designs into the playbook might be an ideal fit for Jones, given his ability to attack downfield, particularly off of play-action, while at Alabama:

According to Sports Info Solutions, Jones led all college passers with 212 attempts off of play-action. Here is where you see more of his vertical passing prowess come into play. Jones completed 167 of those attempts for 2,644 yards, 23 touchdowns and just two interceptions. But on those attempts, Jones had an intended air yards mark of 1,798, ranking him sixth in the nation.

However, in addition to attacking downfield off of play-action, throwing the intermediate crossing route off play-action looks was a strength of the rookie quarterback during his time on campus. Take, for example, this throw against Texas A&M with Jones throwing the crosser after climbing the pocket:

We also saw this element to New England’s offense early during Jones’ time in the game:

One of the common knocks on Jones coming out of college was a perceived lack of athleticism. That might place a great deal of emphasis on how well Jones handles pressure in the pocket with his footwork and poise. So plays like this third-down conversion to Wilkerson might be critical to see as he develops:

On this play Jones is working this three-receiver concept to the right side, with the tight end running across the field, the running back having a free release on a wheel route, and Wilkerson checking up on the curl route. Jones sees that Washington implements man coverage on the play, with a defender buzzing outside to take away the wheel route, so he resets his eyes onto Wilkerson’s curl route just as the pocket starts to collapse, making a throw on-time and in-rhythm, to move the chains.

What was also interesting to see was Jones operating the two-minute drill coming out of halftime. Head coach Bill Belichick told the media after the game that the team wanted to see how well the rookie handled that situation, which they did not get to try with him as the first half was winding down:

As for the venerable coach’s thoughts on the rookie? About what you would expect from Belichick:

Still, you might understand if the Patriots fans in your life are walking with a bit of a spring in their step over the weekend. Jones, in large part, lived up to or dare we say even surpassed expectations in his debut. Whether he is the starter for Week 1 remains to be seen, but the future, at least, does look bright.