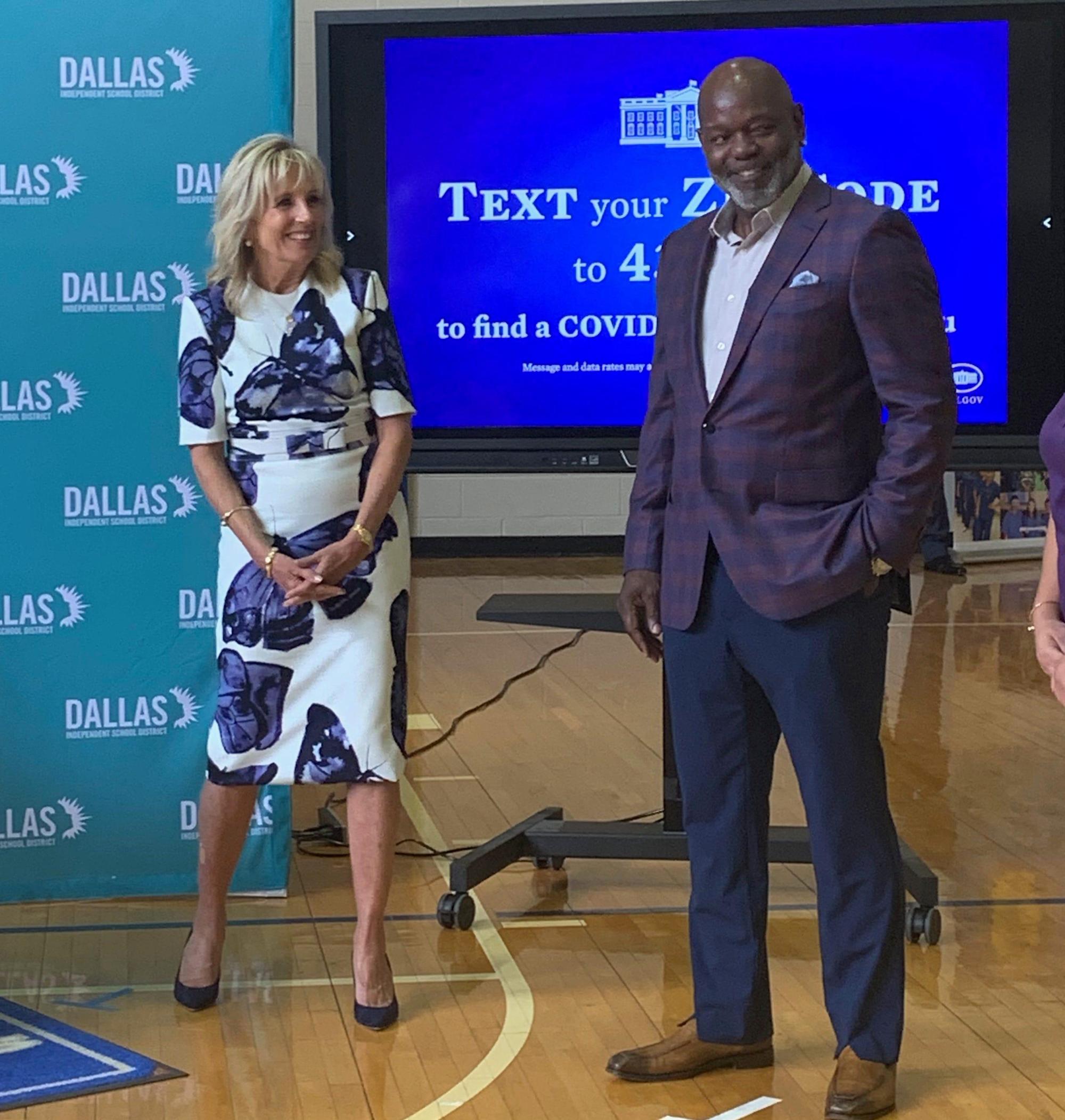 “Trust me, I got my shots, too,” Smith told Walton at a Dallas vaccine clinic Tuesday afternoon. “It’s going to be all right.”

“You really truly are protecting someone else when you protect yourself,” Smith added. “It’s up to someone else now to do what you just did so they can protect the next person.”

The Cowboys legend and three-time Super Bowl champion joined First Lady Jill Biden on Tuesday to tour a vaccine site at Emmett J. Conrad High in Dallas Independent School District. United States vaccination rates lag behind the Biden administration’s goals, with just 46% of Americans fully vaccinated while 54% have received at least one dose. In Texas, only 41% of residents are fully vaccinated per CDC data.

OPINION: Anti-vaccine players will affect 2021 NFL season. You OK with that?

NFL NEWSLETTER: Sign up now to get football news delivered to your inbox

“Like Emmitt said: That is just not enough,” Biden told an assembly of Dallas political, religious and community leaders in the Conrad gymnasium. “Which is why I’m here today. Because your life and your health matter to me and to your president.”

Biden and Smith toured the registration, shot administration and observation stations of Conrad’s vaccine center. Biden implored vaccine patients to encourage five more friends to receive the shot, reassuring them that she barely felt her jab. “And I hate needles,” the First Lady, sporting a white dress with lavender butterflies, said.

Biden aimed to demystify the shot by explaining its safety and efficacy in addition to reminding Dallas all shots are free. Smith said he was “extremely happy” when he and his family were vaccinated through the Parkland hospital system, which was also administering Conrad’s doses.

“This is serious,” said Smith, turning in his plaid purple suit toward rows of Conrad football players. “We’re getting to the third and fourth quarter. So you know you must not stop, you must not quit, you must continue to press on. That goes for each and every American.

“Stand up for the person to your right and to your left.”

Biden, who was visiting her first of three cities on this vaccine-confidence tour, reiterated messaging that President Joe Biden and Vice President Kamala Harris have espoused since before they assumed office in January. But for Smith, this visit seemed less of a given. NFL players have been more hesitant to receive the COVID-19 vaccine than league leadership hoped. All teams had shots, and medical experts to answer questions, available. Not all players are choosing to get vaccinated.

NFL players including Washington Football team defensive end Montez Sweat and Bills receiver Cole Beasley have expressed aversion to the vaccine. Sweat said from offseason practices that he “won’t get vaccinated until I get more facts” — after Washington met with a Harvard public health researcher whose research helped develop the vaccine. Beasley, who spent the first seven years of his career with the Cowboys, posted a statement to Twitter announcing he will not get vaccinated. He said he would forfeit money or his career before acquiescing to the shot.

Sixteen NFL teams had more than 50 of 90 players vaccinated while three had at least 70 as of June 15, the Washington Post reported. NFL teams have offered vaccines and vaccine education to players, also incentivizing them with drastically reduced restrictions for fully vaccinated team members. Travel, workout, testing frequency and meeting logistics will depend on a player’s vaccination status.

Smith and Biden, visiting vaccine patients during a 15-minute observation period to ensure no adverse reactions, equated the vaccine push to the final plays of a game.

“The game is not over,” Smith said.

“We’re going to get a touchdown,” she said. “Thanks for helping us run down the field.”