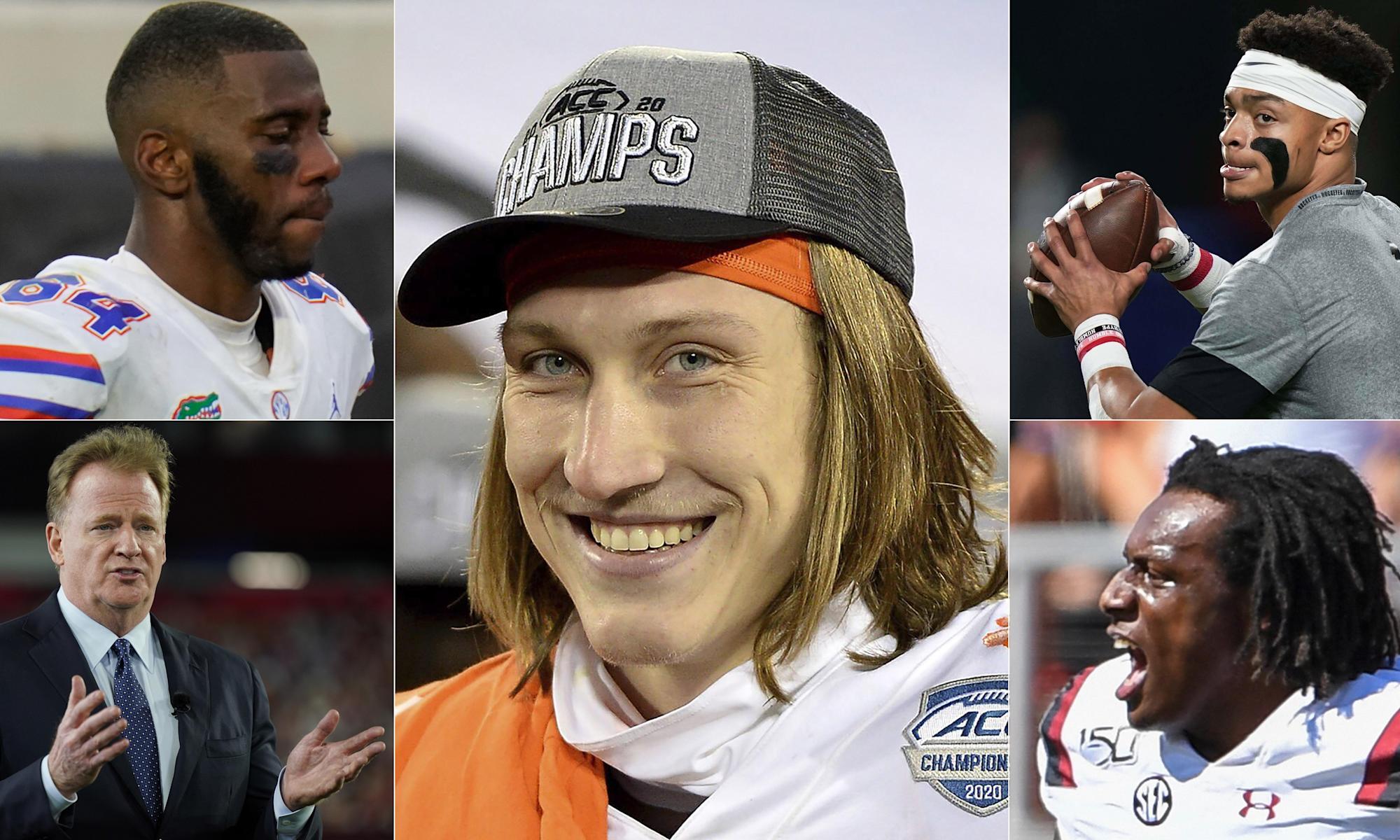 Trevor Lawrence has the potential to be the next …

Andrew Luck. Both are/were smart, athletic quarterbacks able to play within the rhythm and flow of the system or create off-script. Luck was never quite able to hit his Elway-like potential. By the time the team around him was good enough to compete, his body gave out. But for six seasons (particularly the first three) he dragged a rotating cast of mediocrity into playoff contention. Lawrence has similar talent. OC

Justin Herbert. They are both tall, athletic playmakers who can hurt defenses with either their arm or legs. TF

Tom Brady. Lawrence’s blend of athleticism, quick processing time and precision is so unique that’s it is unfair to compare his skill set to anyone. So I’ll go with the most successful quarterback of all-time, because Lawrence is a bonafide winner. MJ

A luckier Luck? When the Indianapolis Colts chose Luck he was expected to be the Next Peyton Manning. Obviously, there was no way to live up to those expectations, but he was one of the better quarterbacks in the league before injury led him to retire at age 29. Lawrence’s ceiling feels like Luck’s career minus the early retirement, which I’m sure the Jacksonville Jaguars would take in a heartbeat. HF

The best quarterback not named Trevor Lawrence is …

Zach Wilson, BYU. OK, so the answer is really Justin Fields but let’s give Jets fans some hope and sayWilson. Did he play against a poor schedule last season? Sure. But did he show a knack for improvisation? Absolutely. Wilson’s lack of traditional stick-slide-throw mechanics makes his projection as a pro prospect tricky. But it was the same with Patrick Mahomes and Josh Allen entering the league. OC

Justin Fields, Ohio State. He has all the arm strength, accuracy, toughness, and intangibles you could want from a franchise quarterback and has got the job done on the biggest stages. What sets him apart from every other top quarterback in this year’s class – including Trevor Lawrence – is his ability as a runner. TF

Fields. He has a rocket arm and can craft plays out of nowhere. Whatever team drafts him is landing a prospect with a Patrick Mahomes-like ceiling. MJ

Talent-wise, it’s Fields although he will certainly not go second (possibly not even third). It’s even possible that the disclosure that his impressive college run happened while he was managing epilepsy could make some teams less likely to consider him. Their loss. HF

The best non-quarterback in the draft is…

Jaycee Horn, cornerback, South Carolina. For the sake of diversity, let’s look away from Kyle Pitts. Horn is a feisty cornerback with the size to match against outside receivers, tight ends, flex into the slot, or even to line up as a safety. OC

Kyle Pitts, tight end, Florida State. He may be listed as a tight end but at 6ft 5in and 245lbs, he moves like a wide receiver and will create nightmares for any defense. Pitts is far too fast and too agile for linebackers to keep up with, but too big and strong for cornerbacks to stop. TF

Related: Speed, strength and smarts: why Kyle Pitts is a near perfect NFL prospect

Pitts. Forget about being the best receiving tight end in this draft by a mile, Pitts is the best receiver in this class, period. He has great hands and jaw-dropping speed (a 4.4sec 40 at his Pro Day ). Pitts will be a matchup nightmare for opposing defenses. MJ

Everyone will mention Pitts, and rightfully so, but what if the best non-quarterback in the draft isn’t going to be chosen because of their ability to catch touchdowns but for the far-dirtier job of protecting the quarterback? Oregon offensive tackle Penei Sewell isn’t going to be a fantasy stud like Pitts but in real-game situations, he could be invaluable. HF

The Dallas Cowboys trade up to No 4. Team owner/GM Jerry Jones is said to be “infatuated” with Kyle Pitts (something he denies). The tight end will be on the board at No 4 and Atlanta will be more than open to making a deal for the right price. OC

Justin Fields will be the most successful quarterback in this year’s class. Not only does he have the aforementioned skills as a passer and as a runner, but he will most likely land in the best situation for immediate results based off most mock draft predictions. TF

The NFL is letting a collection of current and former players announce their teams’ day two selections. At least one of them will be visibly disappointed when announcing the pick. MJ

The New England Patriots will actually trade up. Things have gone topsy-turvy in the NFL since Tom Brady won a ring in Tampa Bay. The Patriots broke the bank in free agency and are now stacked at every position except (presuming an unlikely Cam Newton resurgence) the most important one. They normally trade down but they could (and should) be looking for a first-round QB on Thursday. HF

Which team is most in need of a good draft …

The New York Jets are starting a major rebuild and the pressure is on general manger Joe Douglas to construct a winning team. The Jets have 10 draft picks, six of which are in the first 110 picks. After trading away cornerstone players Jamal Adams, Leonard Williams and Sam Darnold, it is time for Douglas to begin a new era in New York and that starts with which quarterback the team takes with the No 2 overall pick. TF

The draft isn’t all about those sexy top picks, it’s about reloading for the future. The Philadelphia Eagles have the most picks in this draft, although many of them are in the later rounds, and they’re going to need to hit a lot of them if they don’t want to get stuck like Sisyphus in the “under construction” portion of a perpetual rebuild. HF

A lower-round gem to watch …

Jordan Smith, edge, UAB. A former big-time recruit, Smith moved to small school UAB after being suspended by Florida. In Alabama, he blossomed into one of the most ferocious pass-rushers in the country. All arms and burst, he is a classic dip-and-rip pass-rusher wrapped up in a 6ft 7in body. He is expected to be a third-round pick and could prove a steal for a team looking for more pass-rushing oomph. OC

Related: Pressley Harvin III: the TD throwing, 260lb punter who may be the star of the draft

Quinn Meinerz, center, Wisconsin-Whitewater. He is likely to be a day two pick but has the potential to be one of the better offensive linemen in this year’s class. Meinerz held up against some of the top defensive players in the country at the Senior Bowl and many linemen from small schools have had very successful careers. TF

Cade Johnson, wide receiver, South Dakota State. Highly productive but already under the radar thanks to the size of his school, Johnson skipped 2020 due to Covid-19. But then he swooped back into draft season by winning the one-on-ones at the Senior Bowl. MJ

Wanna feel old? Available in this year’s draft is Florida State’s Asante Samuel Jr, who has inherited the skills of his father Asante Sr, a first-team All-Pro cornerback back in 2007 and 2010. The problem is that he’s considered undersized in the modern NFL, at 5ft 10in and 184lb. If he gets drafted into the right system, expect him to flourish. HF

The team that drafted best last year was …

Cincinnati Bengals. The Chiefs, Bucs, and Washington deserve plaudits for finding top-line stars and quality depth, the hallmark of a strong draft. But the Bengals managed to pair both of those while finding a true franchise quarterback in Joe Burrow, provided the Cincy can add the tools to keep him healthy during his prime. OC

The Baltimore Ravens drafted multiple players that made an impact as rookies, most notably linebacker Patrick Queen and running back JK Dobbins. TF

Washington. Chase Young will be tormenting quarterbacks for next decade. Third-round rusher Antonio Gibson had a productive season with 11 touchdowns. But it is seventh-round safety Kamren Curl, increasingly disruptive in 11 starts, who may be the steal of the 2020 draft. MJ

It feels like cheating to say the Cincinnati Bengals since they landed the No 1 pick in the Joe Burrow Draft. Before he was hurt, Burrow was showing signs of being the franchise quarterback everybody thought he was. Plus, they got productive wide receiver Tee Higgins and his 908 receiving yards and linebacker Logan Wilson, who had his moments before suffering a season-ending injury. HF

The top five will be …