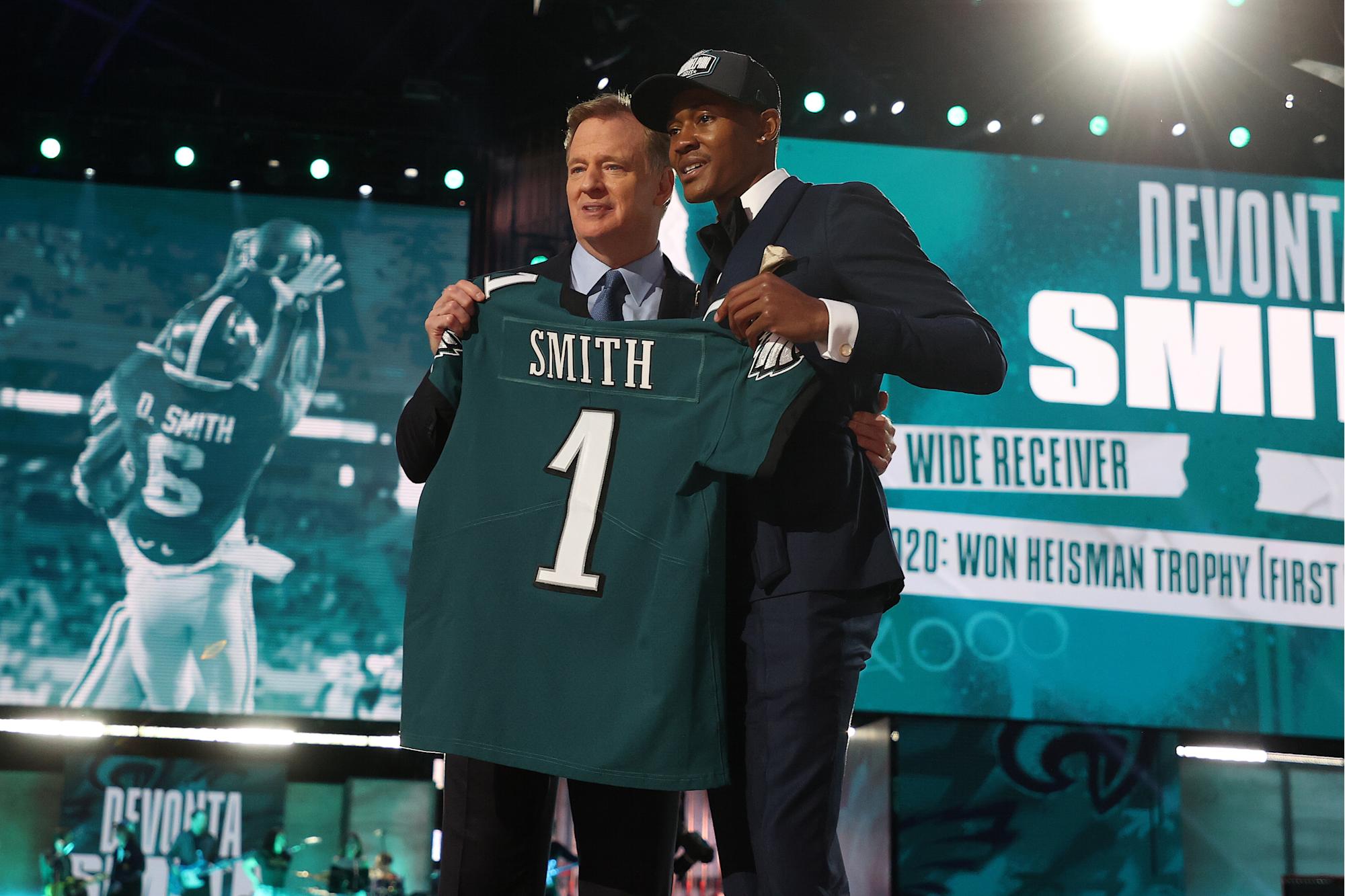 I’m not sure there was a bigger winner than Allen Robinson on draft night.

The stud receiver was faced with another season of dealing with below-average quarterback play after Andy Dalton was placed as the Bears’ starter. Thankfully, it was not to be Robinson’s destiny. The long-suffering franchise reversed course and traded up for Justin Fields.

For the first time in his football life, Allen Robinson will be paired with a quarterback who can match his skills. This is quite literally a football miracle.

Sure, could Fields go the way of other “promising” young passers tethered to Robinson — like Blake Bortles and Mitchell Trubisky — and just not work out? It’s possible. However, Fields has a superior arm and is far more accurate than either of those two. He’s also been a huge success and winner at a major college program. You can’t check any of those positive boxes with the other two.

Bortles and Trubisky profiled as huge reaches and obvious risks the moment they were drafted. Fields profiles as a guy who was undervalued where the Bears got him. It’s as simple as that.

You can slam Matt Nagy for plenty of things during his time as the Bears’ head coach. However, I give him a lot of credit for the way he’s used Robinson. He doesn’t just use him as an ISO X-receiver on deep routes. He moves Robinson into the slot and creates mismatches on layup routes.

Now imagine those plays with Fields delivering the ball.

We’ve seen Robinson scrap to keep his fantasy floor afloat with the Bears’ mess at quarterback the last two years. He finished as WR11 and WR12. With Justin Fields in the fold … you can argue he joins the clear top-10 tier along with guys like Justin Jefferson, A.J. Brown, Calvin Ridley, etc.

This has been a long time coming. And it rocks.

The Eagles finally get it right at WR

Howie Roseman was on about as cold of a streak one could possibly be on when it came to drafting wide receivers the last couple of seasons.

He got it right this time.

The Eagles traded up — with the Cowboys of all teams — to leap the Giants and get DeVonta Smith. Not only is this yet another heartwarming reunion of college passer and receiver, but it’s also a safe pick. And yes, that’s even considering the lack of history of a player with Smith’s size profile.

When the Eagles passed up on Justin Jefferson last year, I’m sure their process was going for upside over instant impact. The process was wrong and flawed at the time but that’s likely the way they saw it. Jalen Reagor was a speed receiver who could bring a big-play element to a vertically challenged offense. Jefferson was the guy everyone knew would be a ready-made pro on Day 1. Again, the Eagles and anyone who thought like that underestimated Jefferson but that’s likely the way they saw it.

This time around, they took the craftsman; the player who knows how to run routes like a pro, and just get open. You can see that all over Smith’s film. I’d bet he’s ready to start from the jump in the NFL; he’s that kind of technician. And few teams needed instant impact at the position more than Philadelphia.

The big winner for me here, though, is Jalen Hurts. He didn’t have anything close to a layup guy in this offense prior to Thursday night. With Smith’s easy separation skills, he has a much better shot at leading an offense that can matriculate down the field, not just hit sporadic big plays.

I get the Bengals’ logic in taking Ja’Marr Chase

With Jonah Williams and Riley Reiff in place, the Bengals’ biggest offensive line weakness is in the interior. With that in mind, I get why they passed on an offensive tackle at fifth-overall.

I can especially understand their logic in doing it for Ja’Marr Chase.

Chase is the missing piece in their skill position room. The Bengals had a pair of strong No. 2 wide receivers in Tyler Boyd and Tee Higgins but were sorely lacking a true X-receiver. That was apparent in their complete inability to push the ball downfield in 2020 even when Joe Burrow was healthy. Vertical routes and contested passes downfield are the strength of Chase’s game.

For all the folks that demand they “protect Joe Burrow,” if you don’t think it was Burrow himself lobbying for the team to select Chase, you’re nuts. Maybe he doesn’t know what’s truly in his best interest, but I might default to his own understanding over the public’s view.

Chase makes the Bengals offense much more efficient the day he walks into the building. The Bengals officially have a unit that’s an advantage; a true strength on offense now. They didn’t have that last year. And they wouldn’t have had it if they had taken someone other than Chase at No. 5.

The Falcons offense is going to be fun

The coach who orchestrated one of the NFL’s most efficient offenses in the NFL the last two years just got another toy to play with.

Arthur Smith’s Falcons added Kyle Pitts with the fourth overall pick, and they didn’t just add an all-world talent — they signaled they’re going to go as hard as possible to make the next two years with Matt Ryan as fruitful as they can.

Atlanta has all the talent available to do just that.

With Round 1 of the draft in the rearview mirror and the Falcons’ “win-now” mode on full display, I’m betting Julio Jones isn’t traded. So, Jones will reprise his role as the running mate to emerging star Calvin Ridley. With Pitts, that trio is one of the more dynamic pass-catching corps in the league already.

I bet Atlanta isn’t done either. This team could add a rookie runner with more juice over the next two days. We should be hyped about this potential top-five offense going into 2021.

Daniel Jones has it all … almost

Kenny Golladay is an excellent vertical route-runner who can win as a true X-receiver.

Darius Slayton has turned out to be a real steal as a No. 2 receiver.

Kadarius Toney is downright dangerous after the catch.

Saquon Barkley should reprise his role as a workhorse back.

That is about as good as it gets when it comes to a skill-position group. Not only is it filled with much more quality than it was this time last year, but there’s a truly enviable diversity to the weapons they have.

Daniel Jones has been volatile, at best, to start his NFL career. The Giants haven’t exactly neglected the receiver corps prior to 2021 but they went all-in on making this a top-five unit the last few months.

It’s not dissimilar to what the Bills did with Josh Allen last year. Will the results be the same? History would tell us it’s a thin bet. Allen didn’t just get a boost from his new receiver corps, he made dramatic improvement as an individual player. Oh, and he got an additional assist from one of the most progressive offensive play-callers in the NFL.

In New York, Jason Garrett is decidedly not that.

On one hand, I admire the Steelers doing anything to fix their miserable run game. It’s just difficult to make the case getting that much-needed upgrade at running back is enough.

Najee Harris is an awesome talent who reminds me a lot of Steven Jackson. But he’ll have to display that ability behind an offensive line that has fallen off a cliff the last two years. The Steelers starting five is one of the roughest looking groups on paper.

There’s also the question of just how healthy an offensive environment Pittsburgh is beyond the line questions. Ben Roethlisberger has to be one of the biggest unknowns in football right now. The last signs we saw from him were not good.

Some of these questions definitely have me bearish about the early discussions about Harris being an instant top-15 running back in fantasy football.

Here are the players that caught a pass from Tua Tagovailoa during a December 2020 win over the New England Patriots:

Here’s who he’ll get to work with Week 2 (Thanks, Will) of this season:

Obviously, everyone after Gesicki are “maybes” to be involved at that point but the top-four alone illustrates the concept. It’s hard to overstate what a dramatic makeover Miami has given Tua’s supporting cast.

Fuller and Waddle are two of the fastest players in the NFL. Parker is a vertical threat because of his contested-catch ability. Gesicki is an athletic specimen in his own right.

Tua didn’t let the deep ball fly nearly enough as a rookie. He’ll have reason to let that thing loose in 2021.

James Robinson backers surely felt crushed by the selection of Travis Etienne at the Jaguars’ second first-round pick. The rest us of just saw yet another piece of evidence in making the case that Jacksonville might be a sneaky value offense in 2021.

Etienne might be a murky pick on his own in fantasy but he certainly adds juice to this backfield. Don’t rule out him gaining value as the year goes on, eventually usurping two veterans on the depth chart completely — recall the once-buried Alvin Kamara from his rookie year. The receiver corps was already underrated with DJ Chark ready to rebound, Marvin Jones bringing steady play, and LaViska Shenault set to take the next step.

As long as Trevor Lawrence is what he’s cracked up to be, this offense could light up scoreboards next year.

Now, they might be doing it down 10-plus points in the fourth quarter but fake footballers aren’t bothered by such scripts.

The Patriots shelled out a lot of cash in free agency to improve their roster. The tight end combination is appealing but it would be hard to argue they’re anything more than just average at wide receiver or running back.

It would have taken an out-of-structure, run-first type of quarterback like Justin Fields to make the Patriots’ offense appealing for fantasy treasure-diving. Mac Jones might be a great pro in the long-term but he’s not going to move the needle here as a rookie.

The Chargers hit a homerun

Los Angeles hasn’t done the flashy things that teams like the Giants have done for their young franchise quarterback. But their approach might be the better one.

Just like when they added Corey Linsley during the opening of free agency, the Chargers continued quietly going about their business in building upon their biggest weakness on Thursday night. Their selection of Rashawn Slater adds a quality option at tackle to plug a hole that’s been leaking for way too long. Justin Herbert has every chance for a strong encore to his dominant rookie year.