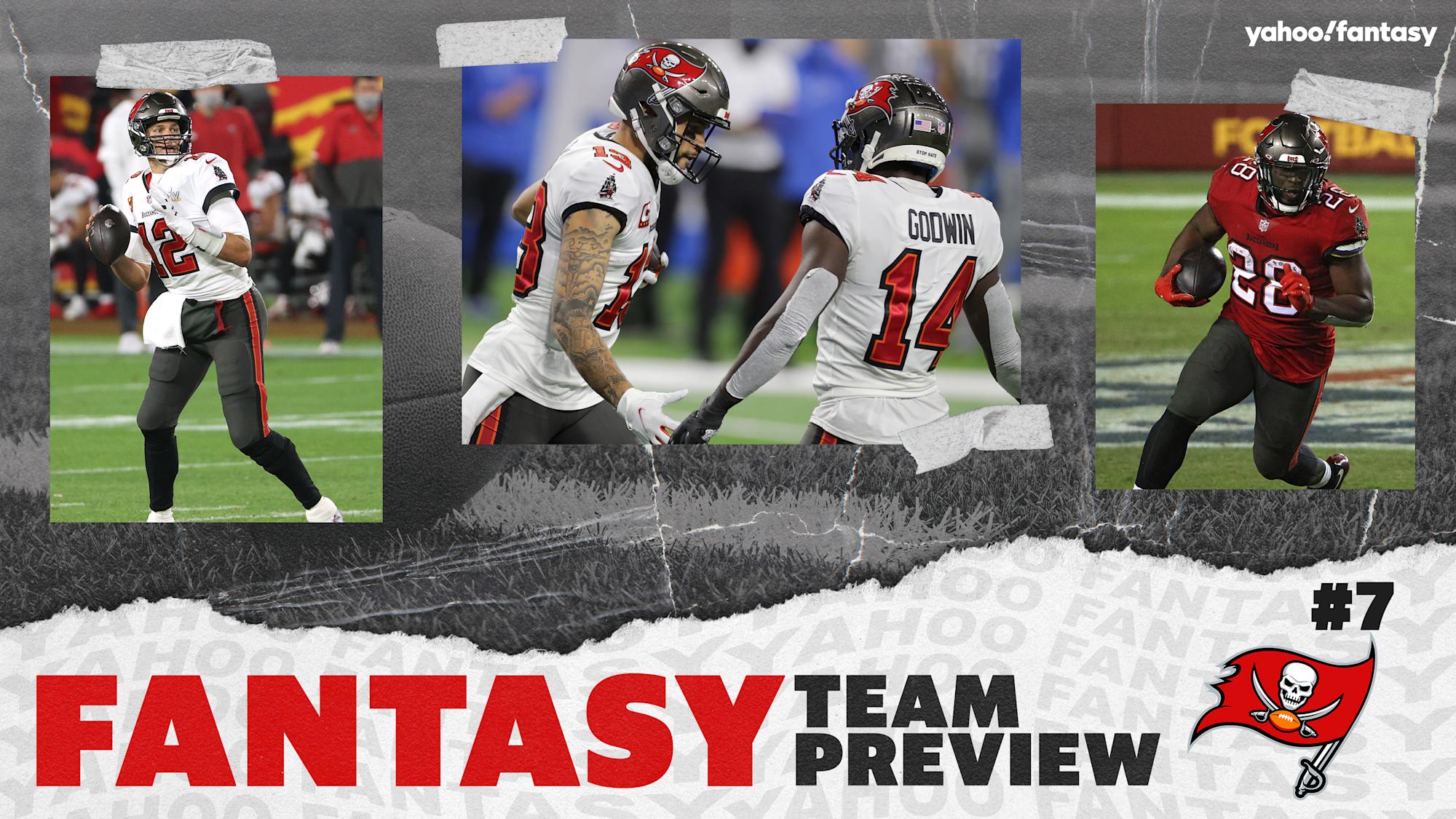 We’re previewing every NFL team to get you ready for the 2021 season. Our analysts will tackle pressing fantasy questions and team win totals, in order from the squad with the least amount of fantasy relevancy all the way to the most talented team. Next up, the 7th-ranked Tampa Bay Buccaneers.

1. He-Who-Laughs-At-Father-Time, Tom Brady, finds himself ranked 10th among our QBs. Brady finished 2020 as the eighth-highest scorer at his position. He’ll be 44 by the time the season starts. How would you convince a fantasy drafter to take Brady over some of the younger, more athletic options available?

Matt: The problem with Brady (that feels like a strange way to start a sentence) is that he has absolutely zero rushing upside. That’s a hugely limiting factor when it comes to fantasy quarterbacks in today’s NFL. Nothing encapsulates that better than Brady’s 2020. He led the NFL in touchdown passes and didn’t even come close to sniffing the top-five players at the position. I don’t mind Brady at all where he’s going in drafts simply because the ceiling projection of the Bucs offense with all their talent is ultra tantalizing. He just can’t really hang with some of the guys who offer rushing upside in fantasy.

Andy: Um … I would not attempt such a thing. The top seven quarterbacks in my ranks are all dual-threat guys who won’t need (yet will probably still deliver) spicy passing stats in order to produce significant fantasy totals. That’s just the odd nature of our game. But Brady is still well inside my positional top-10, because A) his receiving corps is deep and full of stars, B) normal aging rules clearly don’t apply to him and C) he’s coming off 4,633 yards and 40 TDs. Even the down-the-depth-chart receivers for the Bucs are plenty talented, so this squad can deal with injuries as few can. Brady led me to a pair of fantasy titles last season and I’m not gonna bet against him delivering another 4,500-plus yards with 30-something TDs.

Dalton: I can’t rank him ahead of the seven QBs who run, but I have Brady right there afterward, even one spot ahead of the much younger Justin Herbert. Obviously his age is worth mentioning, but Brady got 8.1 YPA over the second half of last season before winning three straight road playoff games and then upsetting KC in the Super Bowl while playing through a knee injury that later required surgery. While Brady lacks the fantasy upside of others who run, he’s not far behind given his highly favorable situation (Brady finished second in end-zone targets last year and has four HOF types to throw to). Brady knows Tampa Bay’s offense far more in Year 2, and can you imagine if Chris Godwin, Mike Evans and Antonio Brown all stay healthy? I have all three ranked as top-30 fantasy WRs, so it’s easy to see why I have Brady as my QB8.

2. The Bucs once again sport an embarrassment of riches at pass-catcher. If you invest in this passing game, are you going early with Mike Evans or Chris Godwin, or looking for value down the line?

Andy: I don’t see a bad choice here, to be honest. The offense should be productive enough that you can reasonably start two Bucs receivers in any given week, so we’re not necessarily forced to pick one dude. Evans has topped 1,000 yards in each season of his career, Brown is the most dominant receiver of the past decade, Godwin does stuff like this…

Draft any/all of these guys with confidence. Again, we’re not talking about an offense that can’t support three viable fantasy receivers.

Dalton: Antonio Brown saw 76 targets compared to 77 for Evans and 76 for Godwin during the 11 games in which AB played last season. Brown will soon turn 33 years old but is a Hall of Famer with crazy work ethic whom Brady absolutely loves. Brown is a great value with an ECR of 45.

Matt: Fantasy drafters are sharp when it comes to the Buccaneers pass-catchers. No one stands out as too aggressively drafted. Godwin and Evans have the risk that Gronkowski and Brown will nip at their heels but are still high enough in the rankings to account for their overall talent/weekly upside. Antonio Brown does look extremely appealing at his ADP. The only real risk here is that, well, he’s Antonio Brown. As long as Brown stays on the straight-sh and narrow-ish, he’ll recoup a great role in the Bucs offense. Brown was electric down the stretch and certainly looked like he still has it, even if he’s not surprisingly a few shades shy of his HOF form from the Steelers days.

3. Ronald Jones and Leonard Fournette are ranked in the RB3 range, but they’re still the top rushing options on one of the NFL’s best offenses. Are you interested in either or would you pivot to some of the rookies or other backs at this stage?

Dalton: Jones is the team’s best runner, but Fournette clearly earned their trust as the three-down option during the playoff run. And now there’s Gio Bernard to take most of the catches. It’s a RBBC situation to avoid in fantasy, albeit one that could quickly shift to a “league winner” if injuries strike and a featured back emerges, as the Bucs are going to score a ton of points. But I’m pivoting to rookie Trey Sermon around then during drafts.

Matt: The Fournette/Jones tandem provides absolutely no clarity. Usually, I’ll just structure my drafts to a point where I don’t need a running back in that range. Even if I do, this duo just doesn’t make its way into my plans. That said, I like taking Bernard late in drafts. He provides the receiving chops no one else in this offense does and there’s a non-zero chance he nips into the early-down work too. Bernard has long been an underrated player.

Andy: Gotta say, I haven’t reached for any member of this backfield in early best-balls. If you made me place a bet on which guy was going to be the 1A to the other guy’s 1B, I’d take Fournette. He’s coming off a dominant postseason run (448 scrimmage yards, 4 TDs), which has to mean something to the coaching staff. Jones might just be the better runner, but he’s also more of a carnival ride.

Dalton: UNDER (+125). Tampa Bay won the Super Bowl during Brady’s first year, and the team’s returning the entire roster. They also play in one of the easier divisions with New Orleans taking a step back. But some regression should hit (Tampa Bay stayed incredibly healthy last season), and this is a big number (even with the added week) for -150 juice. But this team undeniably enters loaded on paper, and doubting Brady usually ends poorly, so this one is more of a “stay away” given the heavy vig to win 12 games.