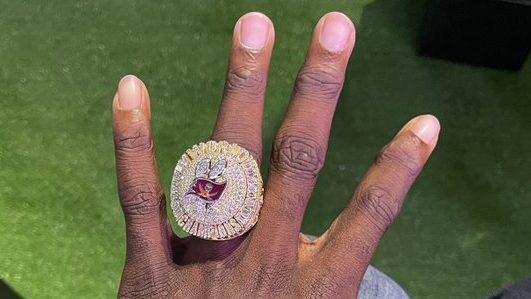 For years, Tom Brady has said that his favorite Super Bowl ring is the next ring. He’s gotten his next ring. And it’s a monster.

“They’re not so much rings, they’re more like trophies that you wear on your finger,” Brady said in a video posted by the Buccaneers. “This is by far the most incredible ring that’s ever been made.”

It sounds like hyperbole, until seeing the ring. It’s gigantic. It’s mammoth. And it’s the seventh ring that Brady was won during his career.

Says Bucs co-owner Darcie Glazer Kassewitz in the video, “So we’d just won the Super Bowl, Devin White came running up to me and he said, ‘Darcie, we gotta bling this motherf–ker out.’”

“Yeah,” White says in the video, “I told her make the rings big as shit.” (Based on the accompanying photo, it definitely is.)

The ring has 319 diamonds, reflecting the 31-9 score of Super Bowl LV. The video explains many more details about it, including the act that the top of the ring screws off — exposing a tiny model of Raymond James Stadium.