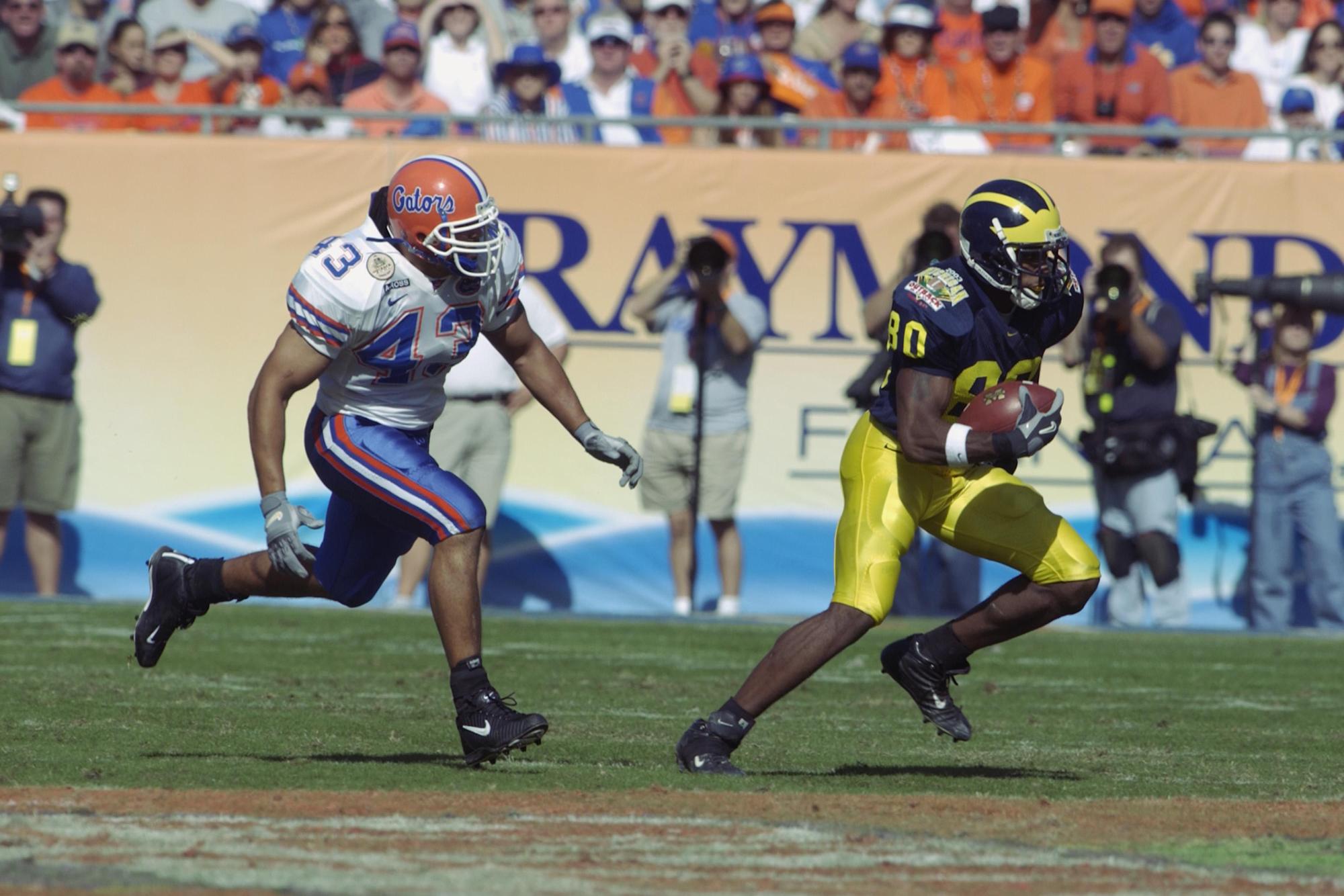 There hasn’t been a shortage of skilled wide receivers that have worn the historic winged helmet.

Michigan is still recruiting the position at a high level, and the maize and blue should have another solid unit when they takes the field for the upcoming season. The Wolverines return most of their skilled players at receiver, including past starters Ronnie Bell and Cornelius Johnson.

In this article, we’re going to go back into the past, and do the third installment of the top 10 players at each position. If you missed it, this began with the Top 10 Michigan QBs since 1995 and now we are onto the wide receiver position.

Once again, the start date will begin with the first year Lloyd Carr took reins of the program, in 1995, and continue to the present. There are a lot of really good Michigan wideouts that have been through the program, so I want to give a few honorable mentions before beginning.

Career statistics: 151 catches, 2,062 yards (13.7 yards/catch), and 14 TDs Best performance: 2016 at Michigan State; 8 catches for 165 yards Why the rank? Depending on how you felt about Darboh, this one could raise a few eyebrows. Darboh was never the flashiest guy on the field, nor did he have breakaway speed, but he was a sure-handed receiver that rarely dropped passes in crucial situations. Darboh sits No. 9 in Michigan history with his 151 career catches – and that’s only playing for three full seasons. Darboh earned second team All-Big Ten in 2016, and he was selected in the third round of the 2017 NFL draft by the Seattle Seahawks.

Career statistics: 124 catches, 2,144 yards (17.3 yards/catch), 12 TDs; 21 rushes for 199 yards Best performance: 1995 vs Virginia; 7 catches, 179 yards, and 2 TDs Why the rank? If Hayes played into today’s game, he would probably be much higher on the list with his speed. Hayes played more in the run-first offensive schemes back in the early 1990’s. Hayes is tied at No. 10 in the Michigan history books with his 179 yards receiving in a single game when they played Virginia. The speedster was selected in the fifth round of the 1996 NFL draft by the New Orleans Saints.

Career statistics: 169 catches, 2,247 yards (13.3 yards/catch), and 13 TDs Best performance: 2005 vs Northern Illinois; 9 catches, 127 yards, and 1 TD Why the rank? Another sure-handed receiver on the list who didn’t dazzle with his speed, but he sure knew when to be in the right place at the right time. Avant had the pleasure of playing with Braylon Edwards, Steve Breaston, Mario Manningham, and Adrian Arrington during his stint in Ann Arbor, which had to hurt his overall statline. Avant is No. 4 all-time with his 169 career receptions in the Michigan history books, No. 10 with his 2,247 career receiving yards, and No. 5 with 82 receptions in a single season. Avant was selected in the fourth round of the 2006 NFL draft by the Philadelphia Eagles.

Career statistics: 176 catches, 2,269 yards (12.9 yards/catch), and 17 TDs Best performance: 2001 vs Ohio State; 15 catches, 160 yards, and 2 TDs Why the rank? Walker was a very good receiver during his playing days with the maize and blue, but he was over shadowed by David Terrell. Walker was known for his stellar catching abilities, and could make spectacular catches just like his one-handed touchdown grab against Iowa in 2001. Walker is all over the Michigan history books — he is No. 2 all-time with his 176 catches in a career, No. 3 with 86 catches in a single season, No. 1 with 15 catches in a single game against Ohio State and Washington and No. 9 with his 2,269 career receiving yards. Walker was selected in the third round of the 2002 NFL draft by the Tampa Bay Buccaneers.

Career statistics: 144 catches, 2,284 yards (15.9 yards/catch), and 19 TDs Best performance: 1998 at Minnesota; 6 catches, 192 yards, and 1 TD Why the rank? Streets was a three year starter with the Wolverines, while he was the ‘go-to-guy’ for two of those seasons. During Michigan’s national championship run during the 1997-1998 season, Streets caught for 127 receiving yards and two touchdowns against Washington State – where they were named the national champions after. Streets is No. 10 with his 144 career receptions in the Michigan history books. He is also tied for No. 12 with 12 receptions in a single game, No. 8 with 2,284 career receiving yards, and No. 7 with 19 career receiving touchdowns. Streets was second team All-Conference during the 1998 season. He was selected in the sixth round of the 1999 NFL draft by the San Francisco 49ers.

Career statistics: 173 catches, 2,704 yards (15.6 yards/catch), and 17 TDs; 17 rushes for 97 yards. Best performance: 2013 vs Indiana; 14 catches, 369 yards, and 2 TDs Why the rank? Who else thought the 5-foot-8-inch wide receiver would have some of the greatest Michigan Wolverines statistics of any wide receiver in the history of the program? Probably not many people. Gallon made the Brady Hoke years somewhat enjoyable being able to watch Denard Robinson and Devin Gardner throw to a really good route runner with blazing jets. Gallon is literally everywhere on the Michigan record board: he ranks No. 1 for Michigan — and the Big Ten — with 369 receiving yards in a single game, No. 1 with 1,373 receiving yards in a single season, No. 2 with 89 receptions in a single season, No. 3 with 173 career receptions, and No. 3 with his 2,704 career receiving yards. Gallon was selected in the seventh round of the 2014 NFL draft by the New England Patriots.

Career statistics: 137 catches, 2,310 yards (16.9 yards/catch), 27 TDs; 31 rushes and 176 yards Best performance: 2007 at Michigan State; 8 catches, 129 yards, and 2 TDs Why the rank? One of my personal favorite wide receivers in Michigan history. Manningham only played three seasons for the Wolverines, but he made his mark. The Ohio native had a remarkable catch radius, and was extremely dangerous in the open field. Manningham is No. 4 in the Michigan record book with 27 career receiving touchdowns, No. 6 with 2,310 receiving yards in his career, and he is No. 3 with 1,174 receiving yards in a single season. He was a two-time All Big-Ten player. Manningham left after his junior season to enter the NFL draft where he was selected in the third round of the 2008 NFL draft by the New York Giants.

Career statistics: 143 catches, 2,657 yards (18.6 yards/catch), and 18 TDs Best performance: 1994 vs Boston College; 7 catches, 179 yards, and 2 TDs Why the rank? Although he technically only started one season — his senior — Toomer went down as one of the greatest wide receivers that has played in Ann Arbor. Just like Mercury Hayes, Toomer played in an era that was primarily running the ball, but the wideout made the most of his opportunities. Toomer was first team All-Big Ten in 1994. He sits at No. 4 in the record books with 2,657 career receiving yards, No. 7 with 1,096 receiving yards in a single season, and No. 8 with 18 career receiving touchdowns. Toomer went in the second round of the 1996 NFL draft to the New York Giants.

Career statistics: 152 catches, 2,317 yards (15.2 yards/catch), and 23 TDs; 8 rushes, 108 yards, and 1 TD Best performance: 1999 vs Alabama; 10 catches, 150 yards, and 3 TDs Why the rank? It was a huge debate where to put Terrell, but I felt like the No. 1 guy on the list just barely edged out the former great. Terrell only played three seasons for Michigan — he declared for the draft after his junior season — and he started two of those seasons. He became the first Wolverine to get back-to-back 1,000 yard seasons in school history. Terrell was an All-American in 2000, and he was a two-time All-Big Ten first team awardee during his collegiate career. The tough-nosed receiver is No. 5 in the Michigan record books with 2,317 career receiving yards, No. 5 with 23 career receiving touchdowns, and tied for No. 3 with 14 touchdowns in a season. Terrell was selected in the first round of the 2001 draft by the Chicago Bears.

Career statistics: 252 catches, 3,541 yards (14.1 yards/catch), 39 TDs; 10 rushes for 72 yards. Best performance: 2004 vs Michigan State; 11 catches, 189 yards, and 3 TDs Why the rank? Edwards has arguably had the greatest career in Michigan football history. Edwards played sparingly his freshman season, but then exploded three-straight 1,000 yard seasons in a row, and earned plenty of recognition. Edwards ranks No. 1 in school history in career catches, career yardage, and career touchdowns. He also sits at No. 1 with 97 catches in a single season, and No. 2 with 1,330 yards in a single season. The Michigan native was the Big Ten MVP in 2004, won the Biletnikoff award in 2004, was an All-American in 2004, and was a two-time first team All-Big Ten player. Edwards was selected in the first round of the 2005 NFL draft by the Cleveland Browns.