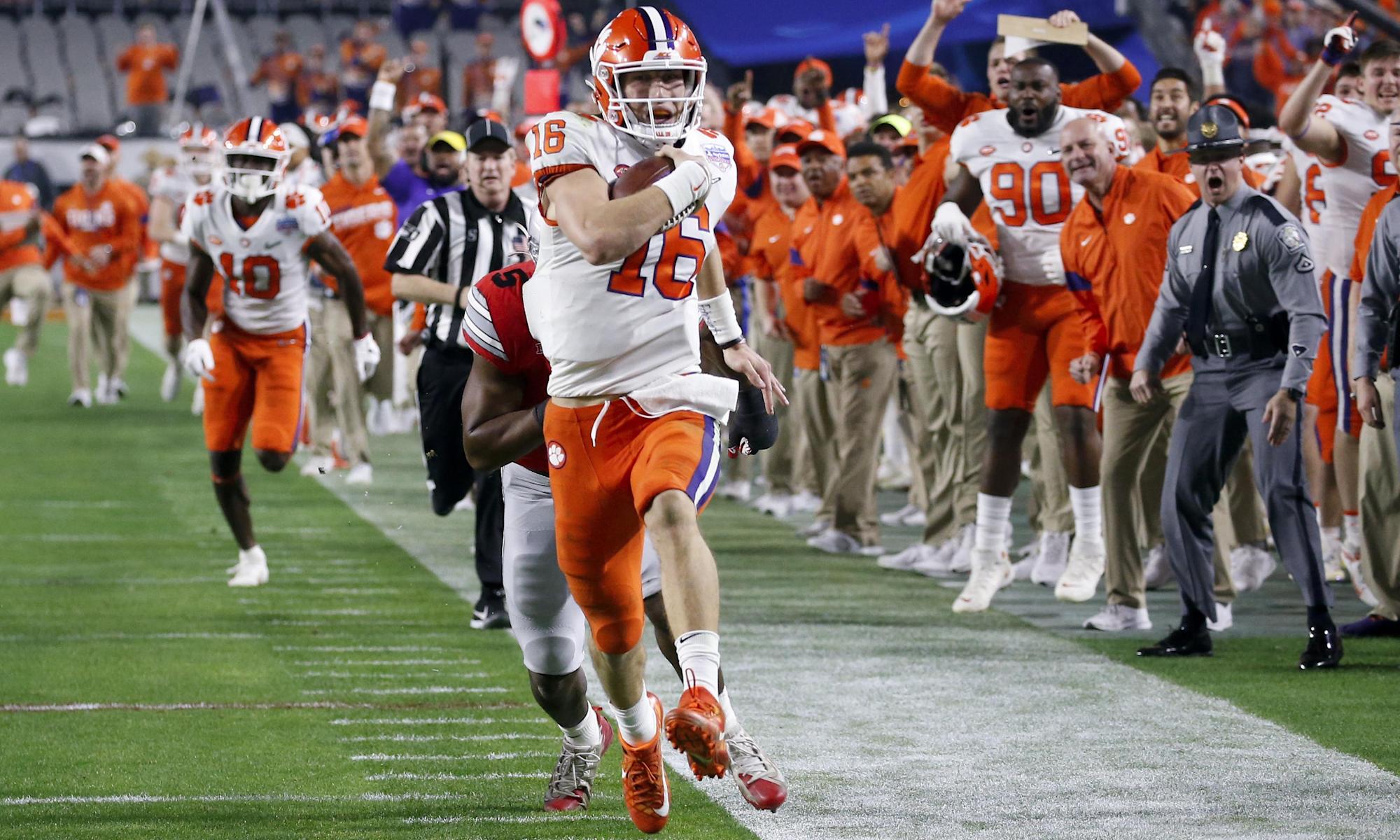 Editor’s note: the list below is the players we believe teams will draft rather than who we think they should draft.

Pick: Trevor Lawrence, quarterback, Clemson. The Jaguars cannot miss with Lawrence. He dominated from minute one as a freshman through to the end of his junior year and is seen as one of the most promising quarterbacks ever. He hits all three levels accurately, has a delicate touch and can keep a defense off balance with his running. Lawrence should be the face of Jacksonville’s franchise for a decade or more.

2) New York Jets
Pick: Zach Wilson, quarterback, BYU. Another dead cert is Wilson receiving New York’s crown of thorns. Incredible in his final season for BYU, he delivered the highest grade from a college passer ever recorded by Pro Football Focus, beating marks set by Baker Mayfield and Kyler Murray. His improvisational talent (much like his namesake in Seattle) makes him a great fit for Jets head coach Robert Saleh as there will be teething problems. Wilson will need more help in protection and weapons than his predecessor to flourish, but GM Joe Douglas appears to (maybe) have figured that problem out after a promising free agency.

3) San Francisco 49ers (from Houston, via Miami)
Pick: Mac Jones, quarterback, Alabama. GM John Lynch has put faith in head coach Kyle Shanahan to find the team’s next franchise quarterback after moving up to move on from Jimmy Garoppolo. They should go for Justin Fields but toasting Clemson with broken ribs in the college playoff semi-finals seems to have been overlooked because of (unfounded) questions about work ethic. Not the greatest of looks, but back to Jones. What he lacks in flashy big throws he makes up for with supreme decision-making and pinpoint accuracy. Sounds better than Jimmy G already.

4) Atlanta Falcons
Pick: Trey Lance, quarterback, North Dakota State. The Falcons start planning for the post-Matt Ryan era. Ryan turns 36 in May and with Matt Schaub finally gone, Lance can immediately step in as his backup. The Falcons can nab the best running QB in the class – and he has a huge, if sometimes inaccurate, arm.

5) Cincinnati Bengals
Pick: Penei Sewell, offensive tackle, Oregon. Cincinnati may consider upgrading their gossamer-thin o-line so that Joe Burrow doesn’t need to run for his life every time he drops back. Sewell should give his QB some room to work. He allowed only 15 pressures on 706 blocking attempts in college and, helpfully for the Bengals’ mediocre running game, he is a master at breaking open lanes too.

Pick: Kyle Pitts, tight end, Florida. Miami pick up a premium offensive weapon. A supreme playmaker, the comparisons with George Kittle and Travis Kelce will worry the AFC East if he lands with the Dolphins. Should kick on QB Tua Tagovailoa’s development too.

Related: Speed, strength and smarts: why Kyle Pitts is a near perfect NFL prospect

7) Detroit Lions
Pick: Ja’Marr Chase, wide receiver, LSU. The cupboard is bare at receiver (and everywhere else) for the Lions after losing Kenny Golladay and Marvin Jones in free agency. The Lions take the best on the board in Chase. The receiver’s pace and ability to create late separation should give Jared Goff a better chance of picking up a few wins while Detroit’s rebuild continues into next season.

8) Carolina Panthers
Pick: Devonta Smith, wide receiver, Alabama. Heisman winner Smith is the tonic Sam Darnold needs to make an instant splash in Carolina (I still believe, Sam). A daunting Panthers offense could be in the making with Christian McCaffrey and DJ Moore around too.

Pick: Justin Fields, quarterback, Ohio State. The mission to replace Peyton Manning is finally over, five long Brock Osweiler nightmare-laced years forgotten. Fields mercifully falls in Denver’s lap after being unfairly pegged to flame out like fellow Buckeye Dwayne Haskins. He will do anything but.

Related: Justin Fields embodies the NFL’s future, so why is his draft stock slipping?

11) New York Giants
Pick: Kwity Paye, edge rusher, Michigan. The G-men were surprisingly stout against the run last season but struggled against the pass. Paye has great quickness and strength, perfect tools for creating quarterback pressure or setting the edge.

14) Minnesota Vikings
Pick: Rashawn Slater, offensive tackle, Northwestern. Kirk Cousins needs help: an average of three sacks a game punished their quarterback last season. The Vikings’ best bet is Slater. Five pressures allowed in 11 starts in the Big Ten should help keep Cousins from being acquainted with the ground quite so often.

15) New England Patriots
Pick: Christian Barmore, defensive tackle, Alabama. Unless New England trade up, or have Jimmy G on their radar, the sensible pick is adding a stud on the interior to bring back the trademark fire on defense. Barmore is an elite pass rusher and run stuffer, a Belichickian dream.

16) Arizona Cardinals
Pick: Jaycee Horn, cornerback, Virginia Tech. The Cardinals waved goodbye to their starting corner pairing so they reach for Horn. A fierce defender in man coverage who can be a shutdown starter from the off in Arizona.

Pick: Micah Parsons, linebacker, Penn State. The Raiders might need more help on the o-line but Parsons is too good to pass on. Electric in stopping the run and rushing the passer. Patrick Mahomes may not quake in his cleats but some help stopping him regularly dropping 35 points on you feels the right option.

18) Miami Dolphins
Pick: Teven Jenkins, offensive tackle, Oklahoma State. Miami keep building for Tagovailoa. Confidence was in short supply for their rookie, and he will benefit from greater trust in his protection with Jenkins holding the fort. Should start from week one, an outstanding, brutal pass and run blocker.

19) Washington
Pick: Jeremiah Owusu-Koramoah, linebacker, Notre Dame. Washington might be tempted by a left tackle but Owusu-Koramoah’s ability to improve Ron Rivera’s already nasty defense could keep the cupcake NFC East locked up for another year. Frequently lined up in the slot for Notre Dame, versatility is his strong suit.

20) Chicago Bears
Pick: Trevon Moehrig, safety, TCU. The Bears backfield could be a dangerous place to visit with the addition of Moehrig. He excels in the slot and at free safety while doing his best work as part of a tandem, so working with 2018 All-Pro Eddie Jackson bodes well.

21) Indianapolis Colts
Pick: Jaelan Phillips, edge rusher, Miami. The Colts could use a partner for DeForest Buckner. Phillips has an alarming injury history but his knack of breezing past offensive lineman is unique in this class. A risk but with potential for huge reward.

22) Tennessee Titans
Pick: Rashod Bateman, wide receiver, Minnesota. Bateman can swing to Ryan Tannehill’s rescue out wide or in the slot. He was knocked for a lack of athleticism, but the Titans will benefit from the draft cognoscenti’s lack of empathy regarding a brutal bout of Covid for the receiver that left Bateman bedridden for two weeks and 10lbs lighter.

23) New York Jets (from Seattle)
Pick: Gregory Rousseau, edge rusher, Miami. Rousseau is boom or bust but Robert Saleh’s defense needs talent on the edge to succeed. There is a small sample size of his work to assess after he was injured as a freshman and then opted out due to Covid concerns. But Rousseau led the ACC in sacks and tackles for a loss in 13 games back in 2019.

24) Pittsburgh Steelers
Pick: Alijah Vera-Tucker, offensive tackle, USC. Pittsburgh’s offensive line needs major surgery to get the running game going again. Vera-Tucker can play both guard and tackle while specialising in run blocking. Perfect … if they can find another Le’Veon Bell in round two.

25) Jacksonville Jaguars (from LA Rams)
Pick: Elijah Moore, wide receiver, Ole Miss. They have their star quarterback but Lawrence needs targets. Moore fits the bill as a receiver with speed who excels in the slot and has the often overlooked skill of slipping those in pursuit.

26) Cleveland Browns
Pick: Jamin Davis, linebacker, Kentucky. Davis finds a new home in Cleveland. A likely starter come September considering the Browns’ talent-lite linebacking crew. Davis chases runners down with ease and can play on the inside or outside.

27) Baltimore Ravens
Pick: Azeez Ojulari, edge rusher, Georgia. Ojulari is undersized but as fast as lightning with sublime technique. If he hits the gym in Baltimore he has a host of veterans to learn from while bolstering their pass rush.

29) Green Bay Packers
Pick: Greg Newsome, cornerback, Northwestern. The Packers have no glaring holes in the roster but Newsome would be a great partner for second-team All-Pro Jaire Alexander. Airtight coverage will leave receivers in the NFC North gasping for air.

30) Buffalo Bills
Pick: Carlos Basham Jr, edge rusher, Wake Forest. Buffalo’s pass rush needs a refresh with Jerry Hughes and Mario Addison into their 30s. Basham is an explosive 285lb force of nature who any tackle will hate blocking. A positive coronavirus test cut his final year short but he should slot straight into the Bills’ rotation on defense.

31) Baltimore Ravens (from Kansas City)
Pick: Jayson Oweh, edge rusher, Penn State. Oweh’s technique is not perfect but his unbelievable athletic ability balances his deficiencies somewhat. A roll of the dice and another defensive talent to help drive a deep playoff run.

32) Tampa Bay Buccaneers
Pick: Levi Onwuzurike, defensive tackle, Washington. The Bucs need defensive depth. Onwuzurike as an understudy to Vita Vea fits the bill. There are few better to show the rookie how to wreak havoc from the inside.