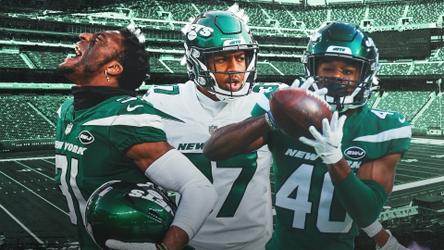 Heading into the 2021 season, the Jets have made a series of moves to improve the state of their roster and overall depth, but are they ready to compete for a playoff spot?

In this series, we’ll break down the depth chart for every Jets position group. This time, we’ll go in-depth on the cornerbacks…

– Key additions/losses: Drafted Pinnock, Carter, Echols. Did not re-sign UFA Brian Poole.
– Top Performer in 2020: Hall – 36 tackles, three passes defensed, one interception, one tackle for loss in eight games.
– 2020 end of season rank via PFF: 25th (for the secondary as a whole)

What Jets CBs have going for them:

Youth is the main thing this group possesses with every likely contributor being 24 or less. The Jets were expected to look for upgrades, perhaps including former 49ers that played under Robert Saleh in San Francisco, but ultimately showed faith in this group and it will be interesting to see whether that pays off.

Projected starters Hall and Austin are late round draft picks who would’ve been drafted higher had they not been coming off serious injuries. Now healthy, they could realize their true potential.

In the slot, it’s a similar story as the Jets opted not to retain the veteran Poole. Guidry started just two games as an undrafted rookie but impressed with his playmaking, leading the team with four forced fumbles.

Experience is the main thing this group lacks as the 24-year-old Austin is the most experienced cornerback they have with just 16 career starts. He’s probably not ready to be a leader at this stage of his career though. The Jets are hoping that the returning players and handpicked rookies will fit well into Saleh’s system and benefit from an increased level of pressure up front. This is a big gamble though and could backfire.

The Jets filled out the depth chart with some rookies, so there are plenty of contenders to win a role, but someone is going to have to step up, otherwise the Jets might be forced to trade for a veteran or find one on the waiver wire.

Player who must step up in 2021: Blessuan Austin

The Jets are reportedly high on Hall’s potential, but Austin’s starting role could be up for grabs if he falters in camp. In 2020, Austin got off to a rocky start as he was leading the NFL in missed tackles during the first month and memorably blew an assignment in outside contain that led to the 49ers rushing for a 55-yard gain on 3rd-and-31 instead of being stopped and forced to punt from near their goal line.

However, his tackling improved dramatically over the rest of the season as he only had a few missed tackles from the end of September onwards. Austin is yet to record his first career interception and, while his overall coverage numbers weren’t too bad, the Jets will expect to see him make advancements in 2021. If he doesn’t, his role could come under threat from some of the other youngsters on the team.

As long as Austin can hold off his competition, the most exciting battle could be in the slot where the Jets may be high on the rookie Carter’s ability to step into the line-up based on Saleh’s enthusiasm during the draft day call to Carter as the Jets announced the pick.

Despite his performance at the end of last season, it may be premature to hand the role to Guidry, so the versatile and athletic Carter will be aiming to push him for playing time.

Much could hinge on Hall, who showed signs that he was settling into his role at the end of last season. After having had one penalty in each of his first five starts, Hall managed to avoid any flags in his last three starts of the season and also picked off the first pass of his career. Whether he can develop into a number one corner is another matter, but the Jets should have a system in place that will protect their corners while giving them some opportunities to make plays.

In terms of depth, Jackson has a good shot at making the team after starting six games last year and Hardee will definitely make it for special teams alone. The rookies Pinnock, Echols and Dunn will all look to earn a roster spot but may also have their eyes on Austin’s job if they can make an early impression.