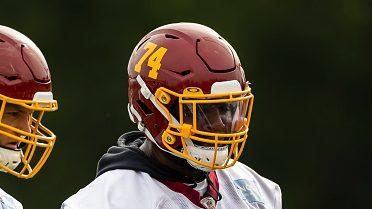 Washington has one of its key depth pieces back.

The Football Team announced on Monday that offensive tackle David Sharpe has been activated off the reserve/COVID-19 list. Sharpe has been on the list since the end of July, missing nearly all of training camp and the preseason.

Sharpe has been with the Football Team since last September when Washington acquired him from Las Vegas. He re-signed with the club in March after appearing in 10 games with two starts in 2020.

Originally a fourth-round pick in 2017, Sharpe has played 34 career games for the Raiders, Texans, and Football Team.

As a corresponding move, Washington has cut receiver Steven Sims. He entered the league as an undrafted free agent in 2019 and caught 61 passes for 575 yards in 28 games over the last two years. He also averaged 25.6 yards per kick return as a rookie.