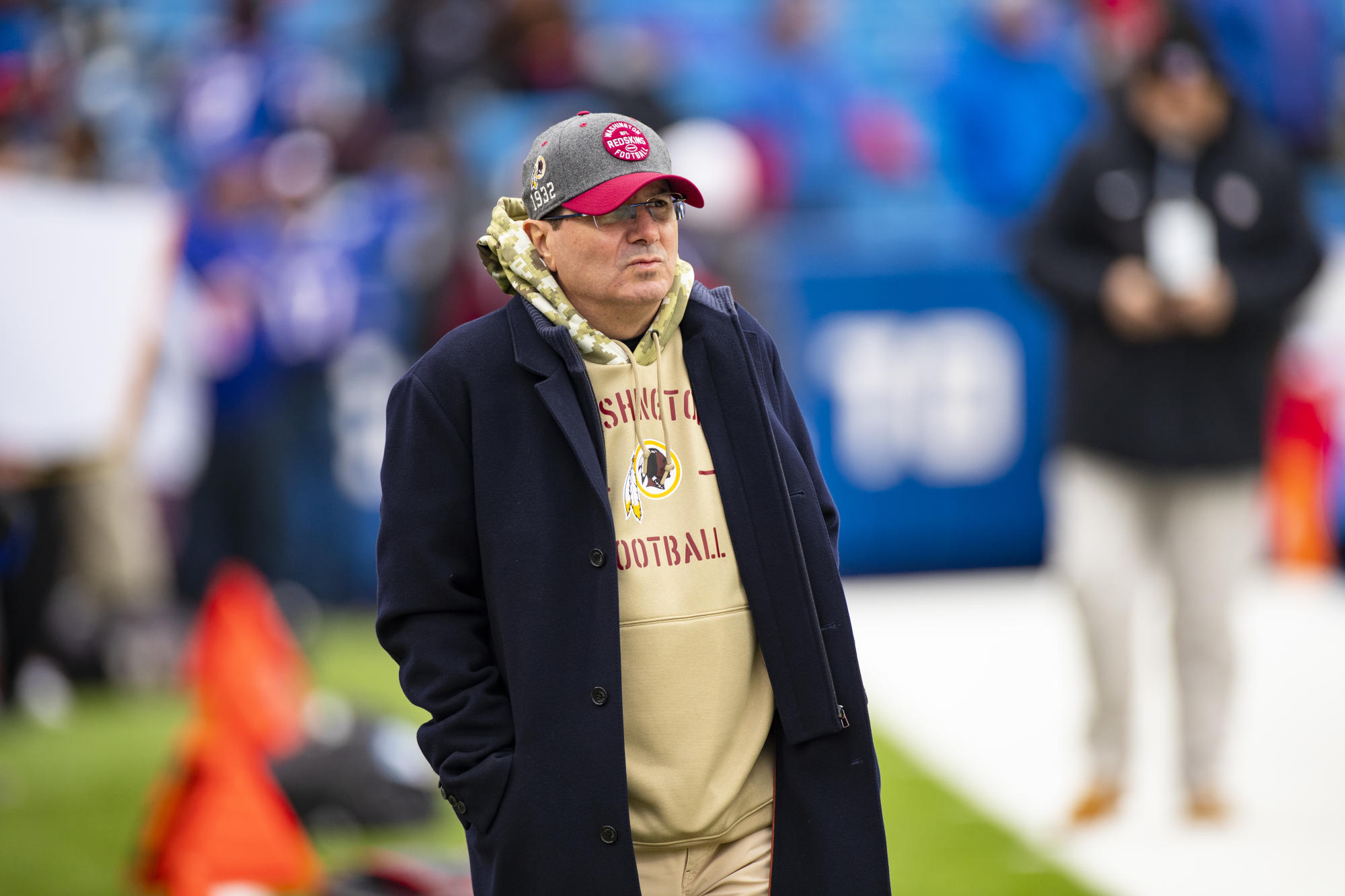 A mere two days after I inhaled deeply and typed the words “the NFL got it right” with its impactful and welcoming “football is gay” video, the league was back to its usual ways, reminding me and women everywhere that it doesn’t give a crap what happens to us.

Not if there’s a billionaire team owner to protect. Not in protection of one of the highest-valued franchises in the league.

On Thursday, the NFL announced that the “investigation into allegations of a hostile workplace culture” with the Washington Football Team had been completed, and announced its so-called sanctions.

The only on-record punishment was a $10 million fine, which, for a man who owns a 305-foot long yacht with its own freaking IMAX theater, is basically pocket change. It’s a farce.

The team announced this week that Tanya Snyder, team owner Dan Snyder’s wife, was suddenly anointed “co-CEO” of the club, and the NFL’s release explained why: Tanya will supposedly now be focused on day-to-day operations of the club, while Dan will concentrate “on a new stadium plan and other matters.” He reportedly will not be able to resume control of the franchise without the approval of NFL commissioner Roger Goodell.

The league’s release takes pains to detail the top-level changes the Snyders have made over the last 18 or so months in terms of hirings and firings, and some allegedly “state-of-the-art” policies around workplace conduct.

A cynic — me, I’m that cynic — would say that the NFL slow-walked the investigation, or at least the announcement that it had been completed, to pressure the WFT into making these changes rather than force Dan Snyder into selling the team, which is really what should have happened.

Jerry Richardson had to sell the Carolina Panthers when his inappropriate behavior came to light. Why doesn’t Snyder have to sell the WFT?

The New York Times had a story over three years ago detailing the exploitative environment team cheerleaders had to endure, and over multiple stories in 2020, nearly four dozen women and several men who worked for the franchise spoke to the Washington Post about the disgusting, misogynistic culture in the team offices. One of the few details offered by the NFL about the investigation into the WFT is that over 150 people were interviewed.

It included constant comments about their bodies and clothing choices. Ogling from men standing under a glass staircase, and looking up if they wore skirts or dresses. Being followed to their cars by players. Verbal abuse. And no real recourse because the one-person HR department was useless.

At least one woman directly implicated Snyder to the Post, saying he suggested at a team fundraising event in 2004 that she go to a hotel room with the team ophthalmologist to “get to know him better,” which Snyder denied. One former member of the team’s video production staff alleged that lewd outtakes from cheerleader photo shoots, showing their bare breasts and genital areas — called “the good bits” or “the good parts” — were spliced together for a video to give to Snyder.

Snyder is so overbearing that the company employee manual instructed that he must be addressed only as “sir” or “Mr. Snyder” and could not be looked in the eye, but the NFL wants us to believe that he was clueless to the rotten culture happening in his building?

Please, do tell us more. Do you have oceanfront property in Iowa to sell us as well, NFL?

In a statement posted to Twitter, Snyder claimed he “did not know the extent” of the issues, but said as team owner the workplace environment was his responsibility.

So again we ask: If Snyder is responsible, why is he essentially getting a slap on the wrist?

Because the NFL doesn’t care about women. Not when there’s a man to protect and that man owns one of the most recognizable franchises in the league.

And let’s not gloss over the fact that the league — which in the past has loved itself a thorough, pages-long report it paid some big-name lawyer millions to produce — did not require attorney Beth Wilkinson, who led the investigation into the WFT, to produce a written report.

No, seriously. She only talked to league. Gave “oral reports,” according to NFL special counsel for investigations Lisa Friel. Nothing for the public to read, nothing to validate victims’ claims.

You know, because the NFL wanted to be totally transparent, as always. And nothing says transparency like making sure nothing is written down for public consumption. A cynic — me, I’m the cynic — would say there must have been some truly heinous findings if the league won’t produce a written report.

In a statement, attorneys Lisa Banks and Debra Katz, who represented 40 former WFT employees, called a spade a spade and said the NFL is choosing to protect Snyder by ignoring their requests that the findings be made public and fining him a menial amount for someone worth a reported $2.6 billion.

“This is truly outrageous, and is a slap in the face to the hundreds of women and former employees who came forward in good faith and at great personal risk to report a culture of abuse at all levels of the Team, including by Snyder himself. The NFL has effectively told survivors in this country that it does not care about them or credit their experiences.”

Banks and Katz are right, though anyone who has followed the NFL long enough isn’t surprised. The league talks a good game and wants you to buy some cute merch made with women in mind, but when there’s a team owner to protect, even one the other owners don’t like very much, it’s going to protect him.

To the women who came forward: Thank you. Thank you for speaking up. Thank you for being brave enough to share your stories and challenge one of the biggest entities in American team sports. So many of us see you and appreciate you and hope you’re finding some measure of peace, and have employment now where you are valued and celebrated.

I’m sorry you had to learn the hard way that the NFL doesn’t feel remotely the same.