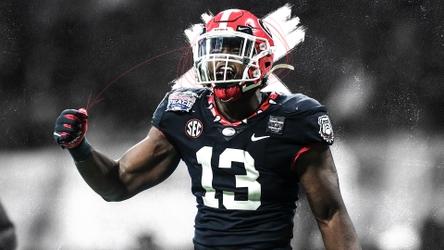 The Jets seem locked in on BYU quarterback Zach Wilson with the second overall pick in the upcoming 2021 NFL Draft, but there’s plenty of intrigue as to which way the team might lean with their No. 23 and No. 34 overall picks.

With the draft approaching, let’s take an in-depth look at some potential options for the Jets. Here’s a look at Georgia EDGE Azeez Ojulari…

Pro Football Network: “Standing at 6-foot-2, 249 pounds, Azeez Ojulari is likely best suited to be an outside linebacker in a 3-4 scheme. He doesn’t quite have the size to be a 4-3 defensive end, but his frame isn’t a big problem. In his role, he has the skill set to be a potentially dominant pass rusher, and that’s upside NFL teams will pay a premium for.”

The Draft Network: “Azeez Ojulari aligns as an EDGE defender for the Bulldogs defense. He will align either in a 2-point or 3-point stance and has played on all three downs for their defense. He plays with good reactive athleticism when out on the edge and demonstrates good quickness, effort, and body control. Although he appears to lack ideal length for a traditional 3-4 OLB, he demonstrates very good pop in his hips and hands at the point of attack to set the edge.”

Why He Makes Sense For The Jets

The Jets’ big offseason signing, Carl Lawson, entered the NFL with similar questions about his lack of length, but Ojulari dispelled these concerns at his pro day, when he measured in with an 82.5-inch wingspan. His arm length is a full three inches longer than that of Lawson, who dropped to the fourth round based on uncertainty over whether he’d be able to overcome this lack of length.

There are similarities, though. Each had a career-high 9.5 sacks in his senior year and demonstrates a combination of speed, explosiveness and power coming off the edge. Lawson has developed into one of the league’s most productive edge rushers by refining his technique, and if the Jets target Ojulari, they would no doubt expect Lawson to take the rookie under his wing to help him do the same. He already displays promising technique, particularly in terms of how he uses his hands.

The Bengals experimented with Lawson as an off-ball linebacker, but ultimately abandoned that and used him as a situational rusher for his first three years. He then thrived when moved into a full-time role last season. The Jets could be looking for Ojulari to follow a similar career arc and be ready to take over from Lawson as the team’s premier pass rushing threat in a few years.

While Georgia has a good recent history of producing versatile linebackers who can drop into coverage and play the run, Ojulari didn’t do much of this over the past few years, although he insists it’s something he is capable of doing. However, it seems more likely that whoever drafts him will want him to play on the edge so he can do what he does best and get after the quarterback. In order to fit the Jets’ system as an every-down edge defender, Ojulari might need to add another 10 pounds, though.

Ojulari is a descendant of a Nigerian King. His grandfather, Twins Seven-Seven, was a Yoruba prince who went on to become a successful artist.

Ojulari showcased his confidence in himself during a recent media appearance: