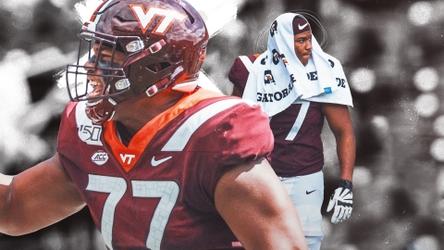 The Giants have a chance to land a real difference-maker with the 11th overall selection as they continue to rebuild.

With the draft approaching, we’re taking an in-depth look at some potential options for the Giants. Here’s a look at Virginia Tech tackle Christian Darrisaw..

NFL.com: Athletically gifted left tackle prospect with the natural talent to be as good as he wants to be. Darrisaw plays with plus body control. He has the initial quickness and smooth agility to get to any and all blocks in the run game…. He’s flexible and loose in pass pro, with the foot quickness and hand strength to punch and close up shop on would-be edge rushers. His mirror can get a little lazy at times, and he will definitely need to do a better job of finishing his blocks. The low-burn field demeanor leads to inconsistencies in play, but the athletic traits and talent as a true left tackle should create first-round demand as a higher-ceiling, lower-floor prospect.

The Draft Network: From a size, length, and mobility standpoint, Darrisaw firmly checks the boxes and should immediately become an asset to an NFL franchise in pass protection, outside zone runs, and utilizing his exceptional ability to pull and connect with moving targets in space. Like most young offensive linemen, Darrisaw has room to add functional strength to improve his overall power at the point of attack, but it’s far from a deficiency that is of major concern. The amount of technical growth Darrisaw has demonstrated throughout the course of his career is exciting when considering his starting point for the next level and how he peaked at the perfect time.

As the Giants look to continue to beef up their offensive line, Darrisaw checks all the boxes physically. With ideal size and athleticism, Darrisaw could step in on day one and start for the Giants at right tackle, or could perhaps be used as a swing tackle off the bench for a season as he learns the NFL ropes.

The main knock that most draft analysts seem to have on Darrisaw is that he can sometimes be too nonchalant and doesn’t have the “nasty streak” that makes a lot of offensive linemen great in the NFL. But under Joe Judge‘s tutelage, it’s fair to image Darrisaw could improve in that area.

Wide receiver may be the more flashy position, and the lure of a Jaylen Waddle or a DeVonta Smith could be too much for the Giants to pass up. But NFL games are won in the trenches, and the Giants could jump on the opportunity to find a bookend tackle to pair with Andrew Thomas.

The Chiefs traded their first-round pick and a lot more to Baltimore this week for Orlando Brown Jr., and some experts believe that could signal a run on offensive tackles in the middle of the first round, before the Chiefs were set to pick. With Penei Sewell likely to go before the Giants pick, Big Blue could go after Darrisaw or Rashawn Slater to grab their tackle before a potential run on the big men starts.