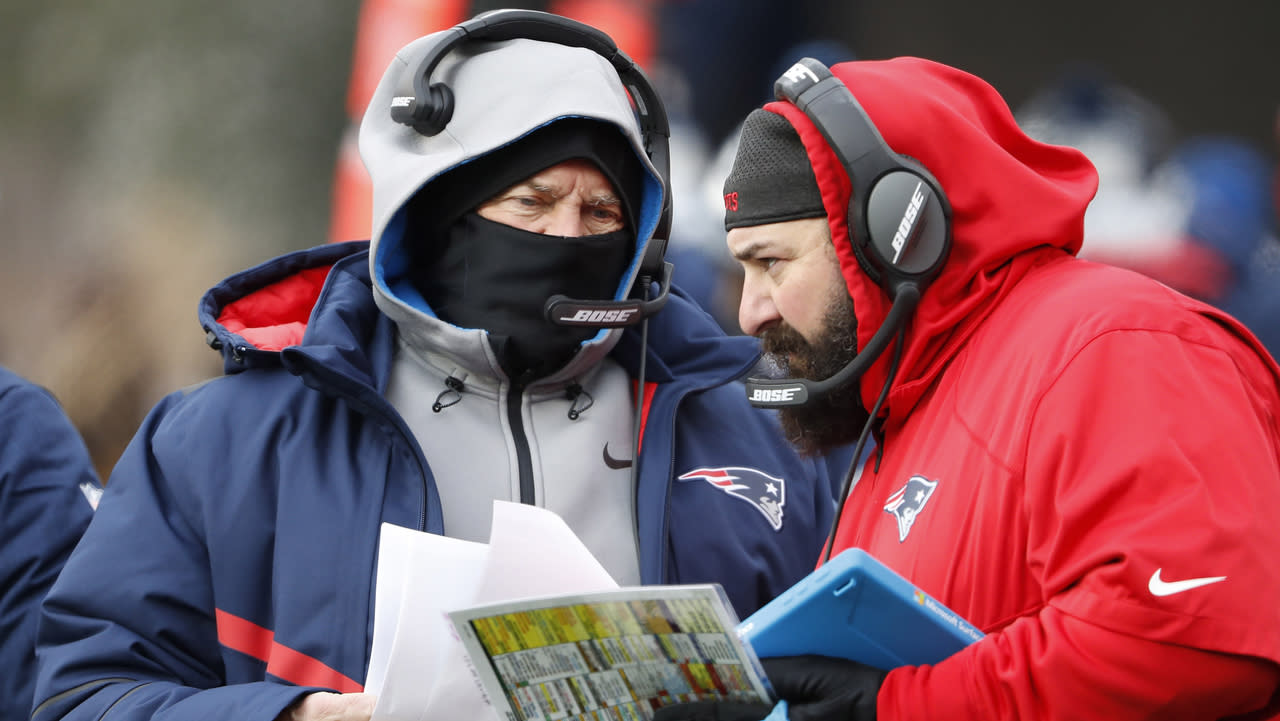 Curran: What’s the endgame for Patricia and the Patriots? originally appeared on NBC Sports Boston

After three disastrous years in Detroit where he ran a mediocre Lions franchise onto the rocks, Matt Patricia is back with the Patriots. And his image is getting a vigorous buff-and-shine.

Since returning in late January after going 13-29-1 as the Lions head coach (he was fired after Week 12 last season), Patricia’s been seen at the right hand of Bill Belichick during the draft and the left shoulder of Belichick for the first 30 minutes of the team’s most recent OTA.

So what’s he doing? Is he biding his time for a year or two before leaving the New England nest? Or is he part of the Patriots coaching and front office future?

Patricia was under contract with the Lions through 2022 so he’s likely not making much – if any – with the Patriots this year for whatever work he does. But his presence and visibility has led to speculation that maybe he’s wedging himself into the Patriots hierarchy.

Patricia being the designated signee on the lion’s share of free agent contracts this spring prompted a Boston Globe story which wondered if Patricia is being groomed as Belichick’s heir apparent as GM, head coach or both.

It’s a fair question. And Belichick’s tire-pumping last week when asked about his former defensive coordinator’s current role made it even more reasonable.

“His advice and counsel and presence has been valuable for us in a lot of ways,” Belichick said. “So yeah, I’m extremely glad that he’s here and appreciate the contributions that he gives us on a daily basis.”

It’s a fact that former Patriots Director of Player Personnel Nick Caserio wore more hats than anyone in pro football. Scouting, coaching, contracts, cap management – he had a hand in all of it. He wasn’t a power-collector in an industry chock-full of them. He was just trusted by Belichick for his competency, loyalty and ability to deliver what Belichick wanted.

With Caserio gone to Houston and Belichick consigliere Ernie Adams reducing his role, there are empty hats. Was Patricia simply handed one to wear for a year while he gets back on his feet? Or is there more afoot?

If it’s the former, that makes sense. There are personnel people – starting with Dave Ziegler with far more experience in New England both scouting and player personnel than Patricia. Ziegler’s been described as a “rising star.” He was deep in the running for the GM job with the Broncos in early January when Belichick convinced Ziegler to pull his name from consideration and return to the Patriots as de facto GM.

Titles are vital in the NFL when it comes to advancement because they indicate the level of power/control an individual has in an organization. Generally, individuals are free to interview for and accept jobs which are promotions. Ziegler’s exact title hasn’t been announced. But he’s been the tip of the spear in personnel this offseason. Brian Smith, Steve Cargile and Matt Groh have also been in the Patriots scouting salt mines for years. Eliiot Wolf is also part of the personnel team who’s seemingly played a big role.

It seems unlikely Patricia leapfrogged Ziegler in the Patriots player personnel firmament after Belichick convinced Ziegler to stay. And while Ziegler is without a title, the one Patricia is carrying (or was when he was trotted out during the draft to announce the Patriots fifth-round pick) was Assistant to the Head Coach.

Patricia’s visibility during the draft and the media access part of OTAs coupled with the Globe story and also Peter King’s Football Morning in America column last week surely does a little to rinse some of the Lions stink off of him. Suddenly, thinking in league circles could switch to, “Hell, if Belichick – the game’s biggest brain – would take him back and give him a prominent role, well hell, maybe we could use him too?”

Which would be doing a major solid for Patricia’s future elsewhere.

At minimum, Belichick is doing Patricia a huge favor by giving him front office experience. Patricia’s three-year tenure as Lions coach ended with a 13-29-1 record, but he would be a much more attractive candidate now that he has experience in contracts and salary-cap management. Patricia may be in Foxborough for at least two seasons, as he is still being paid by the Lions through 2022.

“This is great for Patricia,” the former executive said. “This will position him from a résumé perspective to have as many boxes checked, if not more, than any other coach.”

As to whether all this is an indication that Patricia’s future is right here in New England perhaps at the head of the most storied dynasty in professional sports this century?

First, it’s worth remembering that decisions will ultimately be made not by Belichick but by somebody with the last name “Kraft.”

Second, that’s a chilling proposition. Because even though Belichick was a reclamation project by the Patriots back in 2000, his track record in Cleveland from 1991 to 1995 included a franchise rehab, a playoff appearance and then having to swallow his owner uprooting the team.

Curran: A look back at first impressions left by Pats QBs through the years

That – to put it gently – was not the arc of “success” the Lions experienced under Patricia. But the notion that Patricia’s stepped over and around everyone and sits not at the right hand of Belichick has gained great traction.

Belichick may be legendarily taciturn with the media but nobody in America is savvier at using it for his purposes. Almost nothing is benign. Almost everything is calculated. And if Belichick wasn’t down with the ongoing Patricia puffery, it would have quieted down before now.

The question remains: Is this a simple case of doing a solid for a guy who was a loyal lieutenant for close to a couple decades and would take a bullet for Bill? Or is it a concerted effort to make Patricia seem like a Caserio/Adams replacement in one generously bearded package? Is the aim making Patricia the next in line?