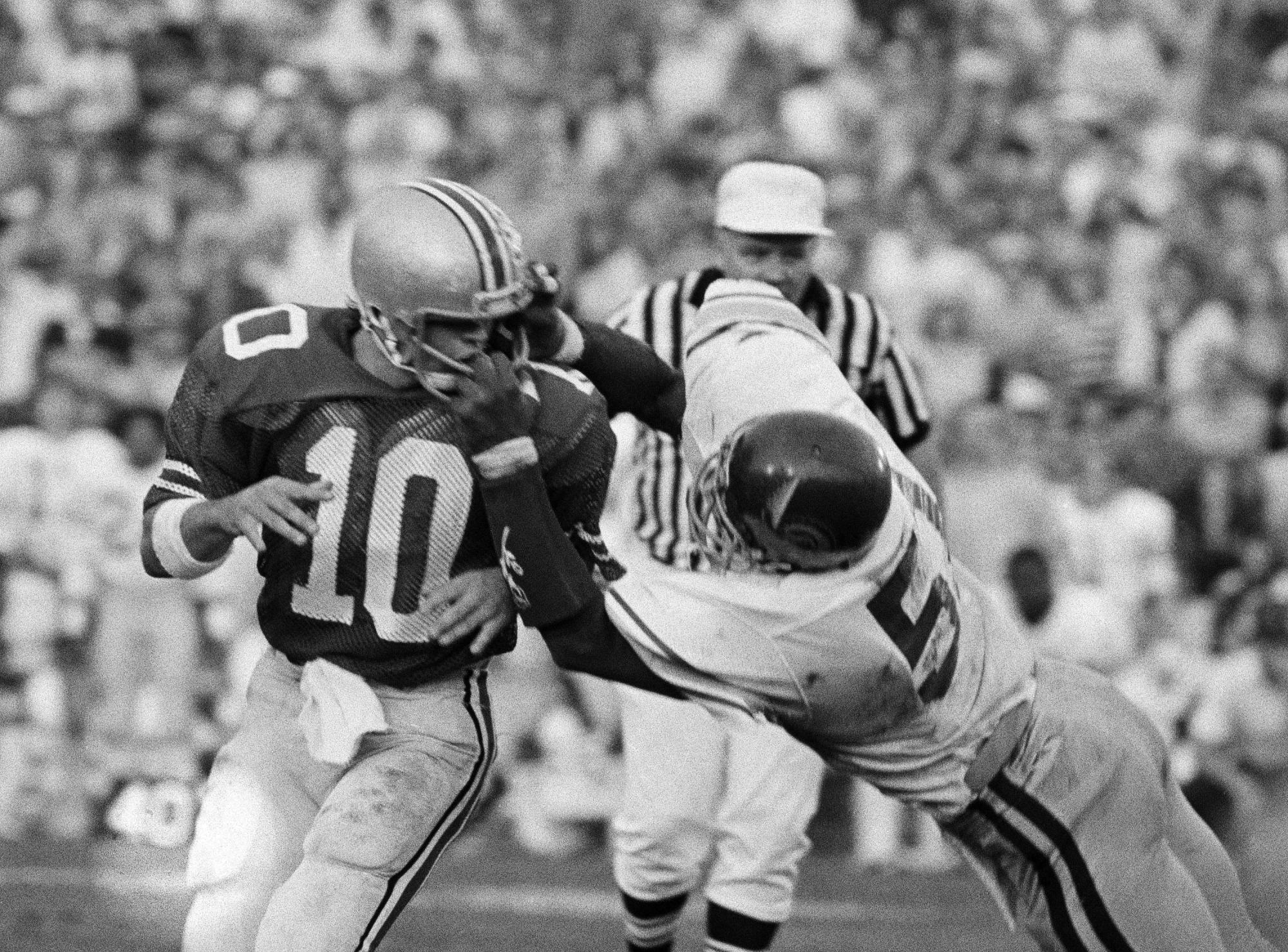 In 1981, USC’s Marcus Allen rushed for an all-time single-season record of 2,342 yards and won the Heisman Trophy. That set him up for the 1982 NFL draft. Somehow, eight teams passed on the great running back—Baltimore Colts had two chances—before the Raiders selected him in the 10th slot. Who went before Allen? Let’s take a look…

Kenneth Sims came to the New England Patriots out of Texas. He made 64 starts in a career that ran through 1989. Sims had 17 sacks in his NFL career.

Johnie Cooks played through 1991 with the Colts, New York Giants and Cleveland Browns. He had 32 sacks in his linebacking career. Cooks played college ball at Mississippi State.

USC’s Chip Banks, who was a teammate of Allen’s, played five seasons with the Cleveland Browns. He had 46 sacks—11 of those came in ’85 with the Browns—in an NFL career that lasted through the 1992 season. (He missed the 1988 season due to a contract dispute.)

Trouble, trouble, and more trouble: The Colts drafted Art Schlichter out of Ohio State, and it backfired big time, to the point where they had to use the first pick in the 1983 draft on another QB John Elway. That didn’t work out too well, either.

Jim McMahon came to the Chicago Bears from BYU and wound up one of the most colorful and controversial QBs in NFL history. He ended his career with two Super Bowl rings, one with the great Bears team in 1985 and the other as a backup with the Packers during Super Bowl XXXI.

Jeff Bryant had 63 sacks in his career, which was spent entirely with the Seattle Seahawks. He had 14.5 in 1984. Bryant played college ball at Clemson.

The Minnesota Vikings dipped into the same conference that Marcus Allen played college ball, selecting Stanford’s Darrin Nelson. The versatile RB had 4,442 rushing yards and 2,559 receiving in a career that saw him play for Minnesota and San Diego.

The Houston Oilers got themselves a great offensive lineman in Penn State’s Mike Munchak. He went on to a career that earned Munchak a spot in the Pro Football Hall of Fame in Canton. Munchak was a nine-time Pro Bowler.

Gerald Riggs rushed for 891 yards with six touchdowns and 11 catches for 139 yards in 11 games as a senior at Arizona State—hardly the kind of stats that seem to make him a choice over Allen. In his NFL career, Riggs played 10 seasons with 8,188 rushing yards and 69 touchdowns, along with 201 receptions for 1,516 yards.