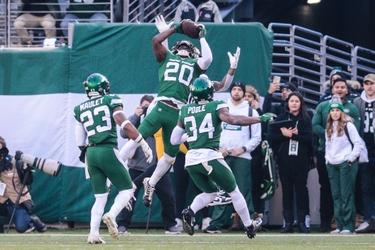 We recently evaluated who could be the Jets’ most improved player on offense in 2021. On the other side of the ball, the Jets added the likes of Carl Lawson, Vinny Curry, Jarrad Davis and Lamarcus Joyner in free agency and added six defensive rookies on day three of the draft. However, there are a few returning players on defense who could show improvement this year.

Let’s review a selection of the main candidates.

Maye had the most consistent season of his career in 2020, setting career marks in several categories. However, as he moves from his rookie deal to a much more lucrative franchise tag – or perhaps eventually a longer team deal –now is the time to take his game to another level.

Despite last year’s exploits, Maye has just six interceptions, four forced fumbles and 2.5 sacks in four seasons, so the Jets will be hoping that Robert Saleh’s defense will put him in a position to make impact plays on a more regular basis.

Franklin-Myers broke out last year with his ability to generate pressure as a pass rusher and should continue to get opportunities to take his game to the next level in Saleh’s wide-nine fronts. As he enters his contract year, the best way for Franklin-Myers to establish himself as a long-term option would be for him to raise his sack number from the three that he managed in 2020.

He’ll compete for time with the veteran Curry, who he can also perhaps pick up some veteran tips from, as both are similarly sized and adept at rushing on the interior as well as off the edge.

The Jets were expected to address the cornerback position during the offseason and may yet do so. However, the fact that they didn’t bring in a big-money free agent or use an early pick on one seems to be a vote of confidence in a trio of youngsters who each started several games on the outside in 2020.

The coaching staff may have confidence that their souped-up defensive line is going to put opposing quarterbacks under a lot of pressure which will force them to get rid of the ball sooner and may lead to some rushed or wayward throws. Barring a late addition, Austin and Hall will be the favorites to earn the starting roles and the coaches will hope they’ll be rewarded for having more faith in these players than the media or Jets’ fanbase.

The slot cornerback position was another one where the Jets opted not to make any big moves during the offseason, which suggests they may have faith in Guidry to lock down that role. Guidry only started two games in his rookie year but when called upon to fill in for the injured Brian Poole down the stretch he held up well, leading the team with four forced fumbles.

He’ll face a battle to win the job, but if he earns this spot, he’ll be another player who benefits from the increased pressure generated up front.

Zuniga didn’t really show anything in his rookie season, so if he can show anything at all in 2021, that will represent growth and advancement in his game. He’s going to have to show improvements just to get on the field with the depth additions the Jets have made but if he can earn a rotational role, he’ll hopefully be able to start making some plays against the run and as a pass rusher.

Some of the offseason moves the team made could theoretically lead to Davis being an odd man out. However, his athleticism and positional versatility are traits that Saleh covets in his system, so Davis could still prove to be a useful piece.

Joyner is currently expected to start as the deep safety, but will face competition from Davis, who could also see time in the box and covering the slot. Davis will look to build on some of the flashes he showed before getting injured in his rookie year.

Finally, Williams already made a big jump last year, but he could still be even more unstoppable in Saleh’s attacking system. Still just 23 years old, it’s unlikely Williams has reached his peak at this stage of his career.