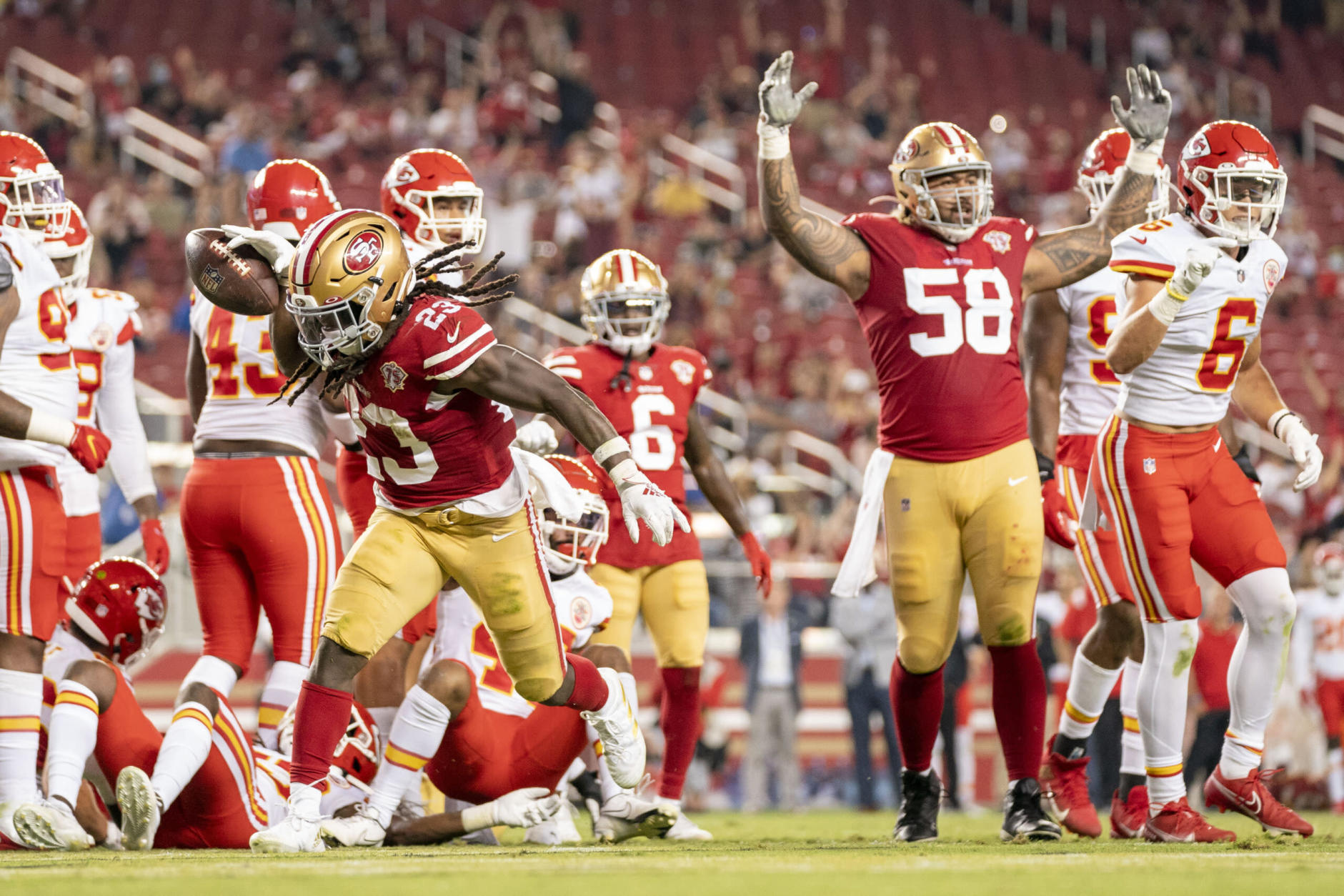 The 49ers got their first in-game look at their 90-man roster Saturday against the Chiefs.

It was going to take a lot for Garoppolo to lose his starting job, but he looked like an experienced, polished quarterback in his preseason debut. He completed all three of his throws, though none were of particularly high difficulty. Still, he was efficient and effective and looked ready to lead the 49ers’ offense into 2021.

Key is having a nice camp, but his preseason debut was uninspiring. He struggled against the Chiefs starting offensive line after having a chance to really put his stamp on a roster spot. Key finished with three tackles, but didn’t spend a ton of time around the quarterback. He should still be in line for a roster spot even if Saturday wasn’t his best outing.

Learning a new position put Matthews behind the curve in making the team, but he had a 16-yard catch-and-run Saturday to go along with a nice special teams stop. Matthews’ willingness to take on new roles to help the team is going to help his cause when it comes to final cuts, and Saturday was a good first game for him as a tight end.

James was an offseason favorite to steal the third WR job. Some drops in camp have kept him from really breaking out, and that carried over into Saturday night when he dropped a perfectly thrown third-down pass from Trey Lance that would’ve given San Francisco a first down. The 2019 seventh-round pick needs to stack a bunch of good days to finish camp if he wants to secure a roster spot.

Hasty took a bulk of the carries Saturday and looked good in all 10 of his attempts. He carved up the Chiefs for 63 yards, including a 21-yard scamper on his first touch. The 49ers are going to have some tough decisions at running back when it comes to final cuts, and Hasty made their job even harder with a good effort Saturday.

Nobody in camp has emerged as the clear favorite for the starting right guard job. That didn’t change Saturday night. Daniel Brunskill started and wasn’t great. Rookie Aaron Banks got a lot of time and struggled before exiting with a shoulder injury. Nobody that came in after that was particularly strong. It looked like the 49ers might find a good RG just by virtue of the number of competitors they had for that spot. Now it looks like they’ll struggle to find a capable starter.

Lenoir played a ton of snaps and notched an interception on a throw that bounced off the receiver. It wasn’t perfect from the fifth-round pick, but he had enough plays where he had good coverage to feel at least a little better about the cornerback depth in San Francisco. There’s undoubtedly still a long way to go for Lenoir. He looked like a capable NFL cornerback though against the Chiefs.

Rosen got virtually all of the second half and struggled quite a bit. He completed 10-of-15 throws for 93 yards and one interception that was exceedingly bad. He appeared to be behind in the QB3 race with Nate Sudfeld, and that was confirmed Saturday night. Rosen has a long, long way to go.