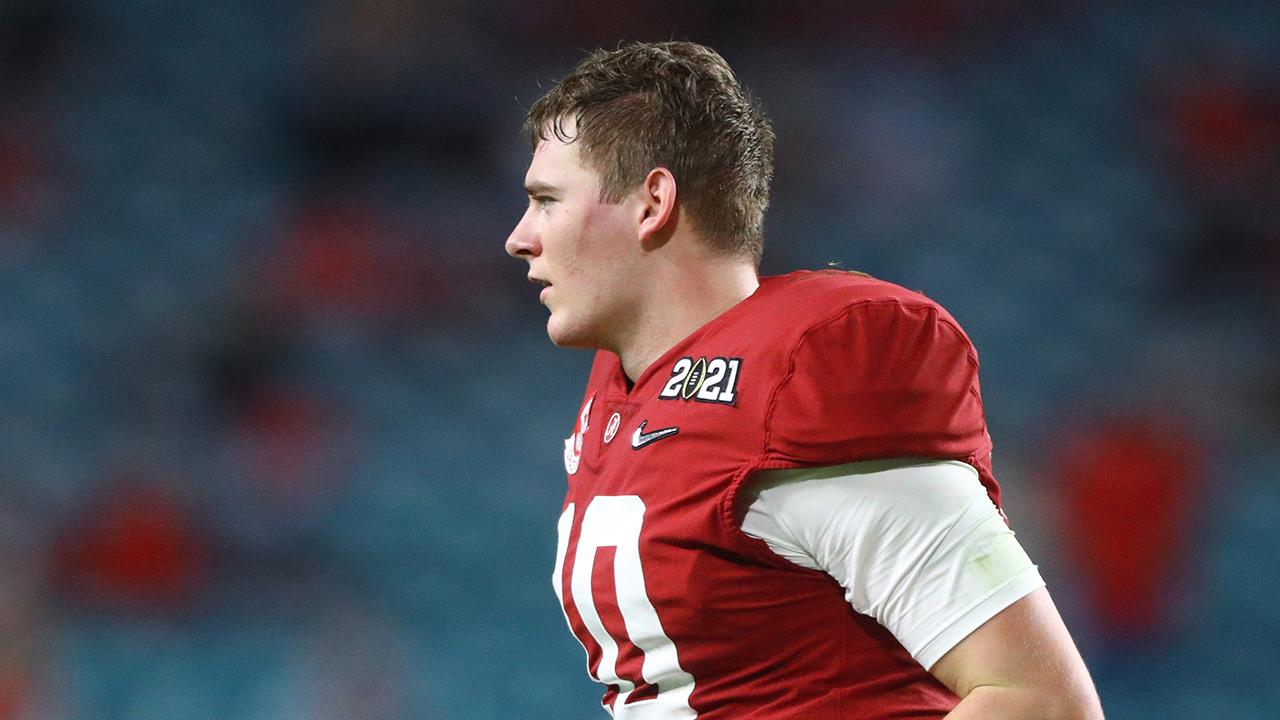 The 49ers were dead set on selecting Mac Jones with the No. 3 overall pick in the 2021 NFL Draft, at least according to most league insiders in the wake of the team’s move to trade up from the 12th pick with the Miami Dolphins.

Justin Fields now has become the betting favorite over Jones to be the 49ers’ choice following an impressive pro day. NFL Network analyst and former league scout Bucky Brooks joined the Rich Eisen Show on Friday, and explained why he’s never bought into the rumors around Jones being the preference of the 49ers’ front office.

“I think the conversation about Mac Jones is just conversation,” Brooks told Eisen. “I think when you’re Kyle Shanahan and you move up, you move up to get a remarkable talent. So that talent to me needs to be someone who can not only do the things that you want to do on the script, but off the script. At the end of the day, what you’re doing is, you need to compare your quarterback to the other quarterbacks in the division, and if we’re being honest Rich, the NFC West has Russell Wilson, Kyler Murray and Matthew Stafford. In any scenario, do we view Mac Jones as being a player that can be better than any of those guys in the next two to three years?

“Because if we don’t, then we shouldn’t make a move for him. But when we think about the extraordinary talents of the two others that are mentioned, we can see how their athleticism and combination of arm talent could give them an opportunity to succeed and surpass some of those guys in the division. I think it has to be one of those two other guys, and I believe Mac Jones is just a smokescreen.”

Brooks hasn’t been high on Jones throughout the draft process, writing in early April that he doesn’t have a first-round grade on the Alabama product.

“Comparing Jones’ skills to those of Trevor Lawrence, Zach Wilson, Justin Fields and Trey Lance, there is a drastic difference between the Alabama standout and those other projected first-rounders. Jones is nowhere near the athlete of Fields or Lance, and he lacks the magical arm talent to compete with the quartet in a game of H-O-R-S-E. Although football isn’t the Olympic decathlon, the modern NFL’s elite quarterbacks are able to deliver “wow” plays with their arm talent and athleticism.

“If we hold Jones to that standard when it comes to quarterback play at the NFL level, the Alabama standout falls short. Far short. He is incapable of winning a shootout as a gunslinger forced to play sandlot football. With those concerns in mind, I don’t know why Jones is being viewed as a first-round prospect, much less a potential top-five pick. The top of the draft should be reserved for superheroes; Jones’ lack of superpowers should keep him out of that range.”

Jones wasn’t anywhere near the first round in mock drafts prior to the 2020 season, but putting together one of the most efficient seasons in college football history and leading the Crimson Tide to a national championship has vaulted him up draft boards.

Fields long was seen before the 2020 season as the second-best quarterback in this class after Lawrence, but BYU’s Zach Wilson also made a meteoric rise up draft boards with his sensational arm talent.

With Lawrence and Wilson almost universally expected to be the first two QBs off the board, the 49ers likely will have their choice of Fields, Lance or Jones at No. 3 overall.

Brooks firmly believes it will be Fields or Lance, but some insiders still believe Jones is the preference of Kyle Shanahan and John Lynch.

Don’t believe anyone who tells you they know for sure which of these QBs will be the selection, as the 49ers’ front office tends to keep things close to the vest. We’ll all find out who was right together on April 29, when the first round of the 2021 NFL Draft gets underway.