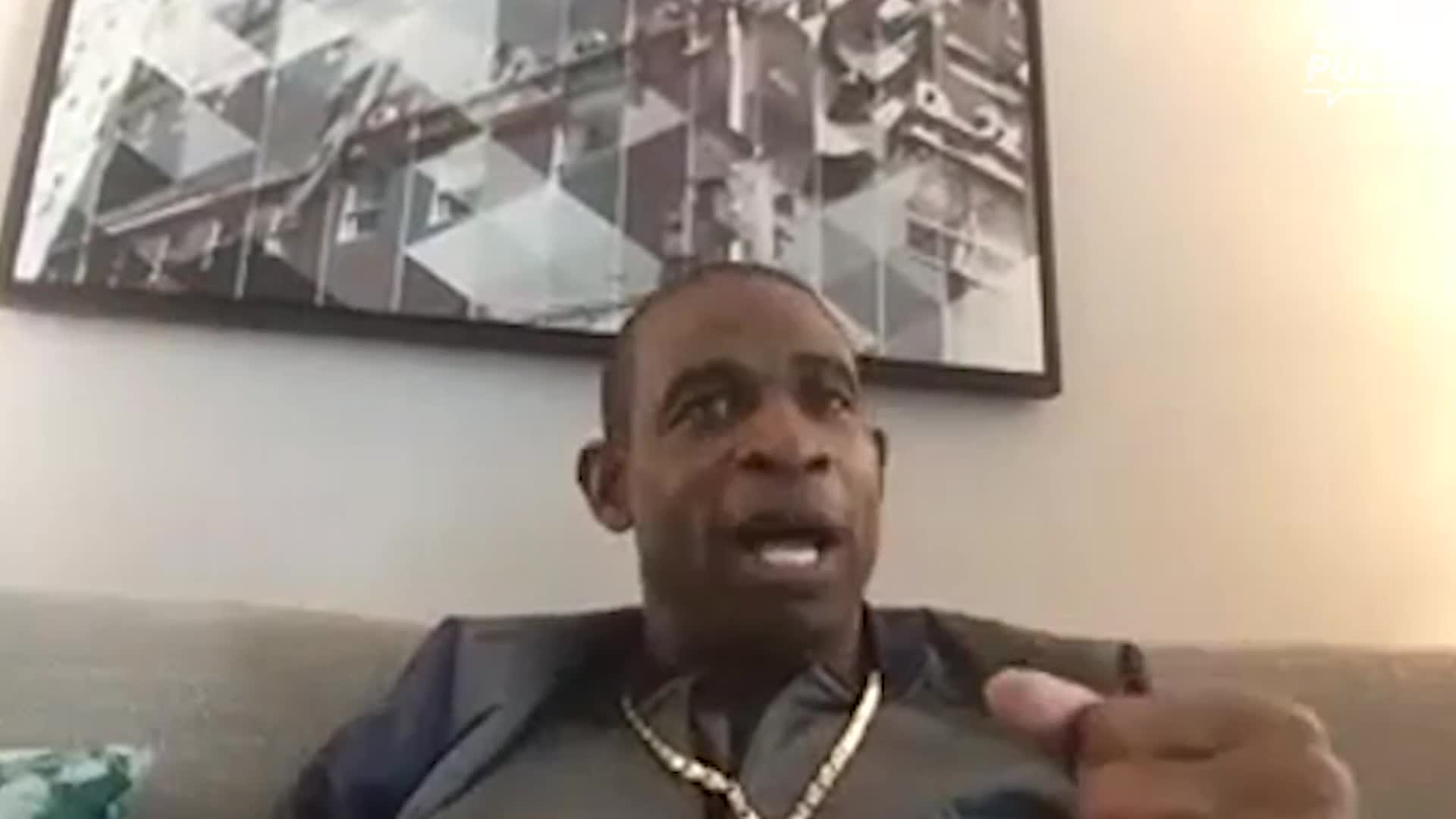 “I witnessed a multitude of kids that we played against that were more than qualified to be drafted. My prayers are that this won’t EVER happen again.”

Deion Sanders, Instagram on May 3 after no players from HBCU programs were selected in the 2021 NFL draft.

Boots on the ground.

To use John Wooten’s phrase, that’s at the heart of the solution for addressing what some insist is a dearth of NFL opportunities for players from Historically Black Colleges and Universities (HBCUs). Wooten, formerly a longtime NFL scout and personnel executive, has collaborated with Dallas Cowboys personnel executive Will McClay on a proposal that would create a scouting service targeted at HBCU programs, from which all 32 NFL teams can draw from.

The HBCU Score, as Wooten calls the proposed consortium that has been pitched to the league for support, would be structured similarly to the BLESTO and National scouting combines that some teams subscribe to in supplementing their personnel departments. The service would employ an army of independent scouts assigned to evaluate and rank HBCU prospects.

“This is the same thing that we used to do in hitting these schools,” Wooten told USA TODAY Sports, alluding to his days as a Cowboys scout during the 1970s and 1980s, when the few Black scouts for NFL teams during that era canvassed HBCU schools as part of their regular scouting circuit – an underlying factor contributing to the 30 Pro Football Hall of Famers that came from HBCU programs. “You’ve got to have boots on the ground.”

McClay, the Cowboys’ vice president of player personnel, said he was motivated to find solutions after seeing Sanders’ comments and hearing chatter from others about the apparent lack of opportunities for HBCU prospects. He realizes it isn’t feasible to teams to commit extensive resources to scouting the HBCU schools when the lion’s share of draft picks come from power conferences. Yet he also can’t ignore prospects from HBCUs, which is why he thinks a scouting service would pay huge dividends to all involved.

“We’ve got to go where the fish are,” McClay told USA TODAY Sports, alluding to his team’s scouting efforts. “You only have so many resources, and HBCUs haven’t been producing as many NFL players as in the past.”

Wooten retired in 2019 from his post as chairman of the Fritz Pollard Alliance, which monitors and promotes opportunities for minority coaches and front office executives. Now he’s drawing on his scouting roots for another type of progressive measure. He knows the biggest part of this particular challenge involves convincing the NFL to invest, especially after the league’s revenues took a hit of an estimated 25% due to the COVID-19 pandemic.

“I can understand people not wanting to spend money, but if you are going to help the HBCUs become the entity that it was in the ‘70s and ‘80s,” Wooten said, “you’ve got to help young players know that if they choose to go to a Grambling or a Morgan State, that they are going to get scouted just like they would if they went to Alabama, Southern Cal or Oregon.”

In recent years, much of the scouting of HBCU schools has come in the form of evaluating game footage through the league’s HBCU Video Exchange Program, which is operated by a firm, DV Sports, contracted to distribute the videos collected from conferences. In 2020, the league also created an HBCU scouting committee that generates a list of the top 150 draft-eligible HBCU prospects, which it distributes to teams and organizers of college all-star games combines.

Despite such efforts, here’s a scorecard: There were 259 players selected in the NFL’s recent three-day draft and not a single one was picked from an HBCU program.

A COVID-19 factor? Perhaps to some degree. The bulk of conferences with HBCU schools – the FCS-level Mid-Eastern Athletic Conference (MEAC) and Division II Central Intercollegiate Athletic Association (CIAA) and Southern Intercollegiate Athletic Conference (SIAC) – canceled their 2020 seasons due to the pandemic while the FCS-level Southwestern Athletic Conference (SWAC) pushed its campaign to the spring of this year. Prospects all across the college landscape who sat out in 2020 and were not blue-chip talents were undoubtedly at a decided disadvantage in the draft evaluation process.

Then again, in 2020, just one player from an HBCU was drafted … in the seventh round.

“It should be troubling to each of us, if you want the best for the game,” Troy Vincent, the NFL’s executive vice president for football operations, told USA TODAY Sports.

Several players from HBCU schools signed as undrafted free agents this month. The Broncos signed former North Carolina A&T cornerback Mac McCain III, an FCS All-America with sub-4.4 speed who starred on back-to-back Black College championship teams; the Falcons added Kion Smith, a 6-6, 315-pound offensive tackle from Fayetteville (North Carolina) State. McCain and Smith were among the prospects who stood out during an HBCU combine event (which wasn’t affiliated with the NFL) in April at the University of Alabama-Birmingham.

But why weren’t they drafted? Small-school prospects were picked from the likes of Concordia-St. Paul, Charleston and Division III Wisconsin–Whitewater. Yet Alabama A&M, Southern and South Carolina State weren’t represented.

That’s why Sanders, the Hall of Fame cornerback who became Jackson State’s coach last fall, publicly expressed his dismay about the HBCU shutout.

“Every week, we play a game against someone and it’s, ‘Damn, that kid can play!’ “ Sanders told USA TODAY Sports during a recent interview. “An Alabama State cornerback. A Mississippi Valley safety. That little kid was coming down the hill, bringing it. That kid can play on Sundays. But the only reason he ain’t been discovered is that there ain’t no light on him.”

Sanders, one of the four former NFL players now heading HBCU football programs, was referring to the light of exposure. In this day and age, with so much technology, it may be difficult to believe that talented players from any school can fly under the radar. Yet some insist that HBCU prospects still get the short shrift when it comes to the scouting process. Even in normal years without a pandemic, few HBCU prospects are invited to the NFL’s scouting combine in Indianapolis to play in college all-star games where they can be evaluated while matched up against players from traditional football power programs.

“Definitely, that is something that has to change,” Howard coach Larry Scott recently told D. Orlando Ledbetter of the Atlanta Journal-Constitution. “I just think the continued awareness and continued cameras following and watching, leveling the playing field and giving the same opportunities to players that are from HBCUs has to continue, it has to pick up. You (heavily scout) at other FCS programs. Why not do it at the HBCU level as well? It’s something I think systematically has to change and it needs to change right now.”

Wooten agrees. He doesn’t think the video exchange program and the list of prospects go far enough in ensuring that the best HBCU prospects are thoroughly evaluated. He also wonders that with the volume of video that NFL teams receive from every school – starting with the Power 5 football factories – whether many teams commit the manpower to review and grade footage from HBCU games.

“How do you even know who to look at if you don’t have reports?” Wooten said.

The NFL is actively adding new forums to create opportunities for HBCU players. In March, the Black College Football Hall of Fame, in partnership with the NFL, announced the creation of the HBCU Legacy Bowl – a postseason game for draft-eligible HBCU players. The game will take place on the Saturday after Super Bowl 56 at Tulane University’s Yulman Stadium and will broadcast live on NFL Network.

And there’s more, the league announced Wednesday morning that the Senior Bowl will conduct an HBCU combine in Mobile, Alabama, featuring players invited from the CIAA, MEAC, SIAC, SWAC and other HBCU institutions. An HBCU scouting committee, comprised of current and former league executives, will evaluate and select participating players.

With scouts assigned to the various HBCU schools, though, Wooten believes that, in addition to evaluating prospects in multiple games and practices, relationships with coaches and others at the school will also be developed that could enhance the level of information in individual player reports.

“When the coaches see us coming, they know we are there to help,” Wooten said.

Conceivably, after the HBCU service evaluates, grades and ranks prospects, the personnel departments from NFL teams can access the reports and determine whether to use their own scouts to take a deeper dive on any given prospect.

While Vincent alludes to other factors that may hinder HBCU prospects in efforts to play professionally, such as substandard facilities at many schools, he also wonders if there’s a pattern where players who were rated as four- or five-star recruits coming out of high school seemingly fell off the map with various scouting services after they transferred from Power 5 schools to HBCUs. And he doesn’t dismiss the premise that more scouting can create more opportunity.

“We have to do a better job of assessing, driving awareness and providing opportunities for scouts and clubs to access HBCU programs,” Vincent said.

David Turner, who scouted for five NFL teams over 19 years in addition to serving in personnel roles in other professional leagues, thinks an HBCU scouting service would fill a void that hampers efforts of even the best-intentioned NFL teams. Turner was also one of the organizers for the HBCU Combine that aimed to increase exposure for overlooked players.

“Seeing that most of the HBCUs are in the Southeast, most of the regional scouts (for NFL teams) are focused on the SEC,” said Turner, mindful that for 15 consecutive years the SEC has produced the most NFL draft picks per conference, including a record 65 selections this year. “That limits their ability to get to HBCUs. So, a lot of back-end prospects, guys who might be fifth-round picks through priority free agents, don’t get a lot of exposure.”

Especially if there are no boots on the ground.

This article originally appeared on USA TODAY: NFL draft: How HBCU players can get more opportunities in future