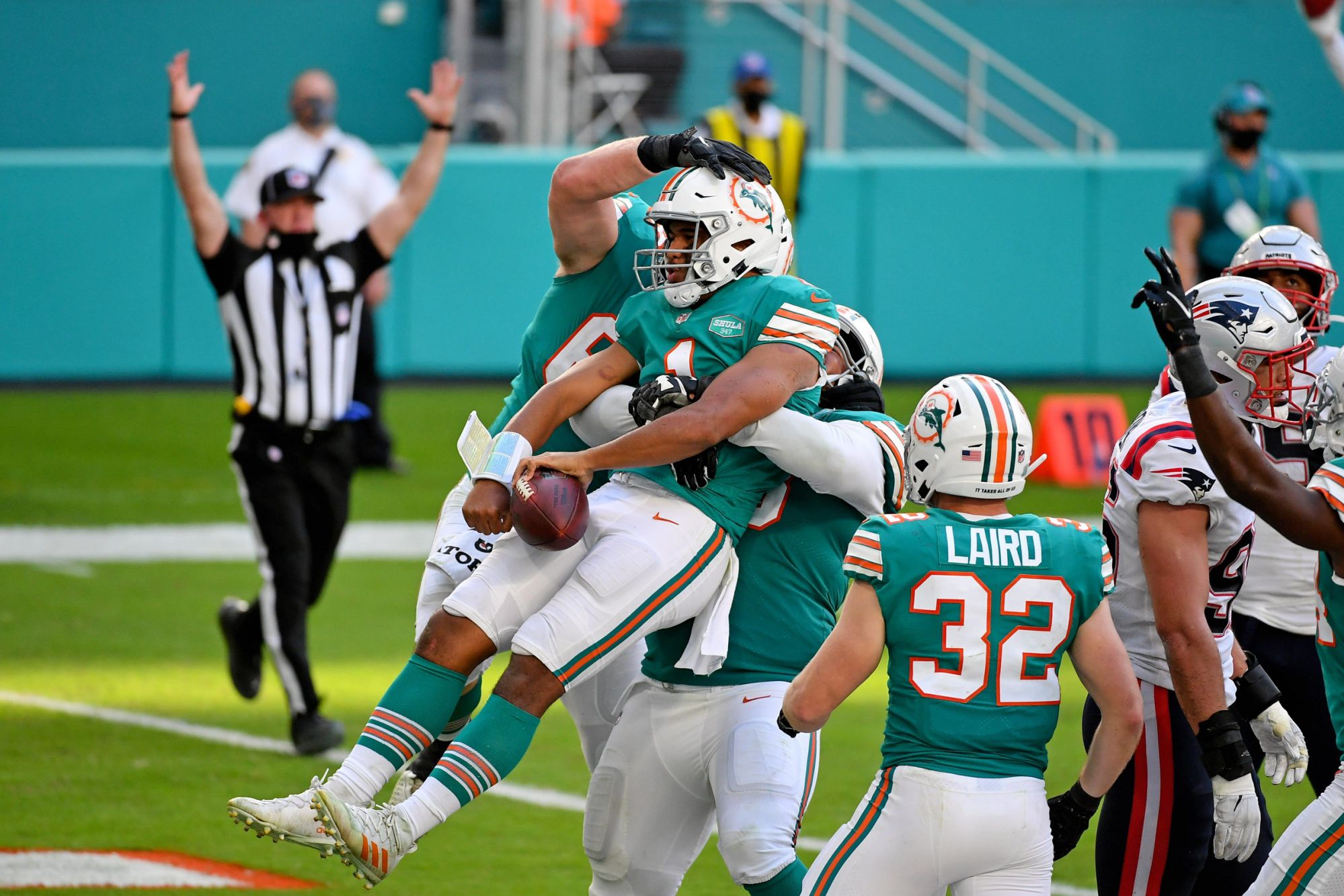 Just when it appeared the NFL was headed for a relatively quiet period – what with the league’s free agent market largely picked over and the draft still nearly five weeks away – an offseason thunderbolt landed Friday, and this year’s first-round order was suddenly jumbled.

The Miami Dolphins were at the center of the pre-draft chaos, shipping the No. 3 overall pick to the San Francisco 49ers for No. 12, first-rounders in 2022 and 2023 and an additional third-rounder next year. But the Fins didn’t wait long before vaulting back into the top 10, flipping that No. 12 selection and one of their 2022 first-rounders as part of a package to the Philadelphia Eagles that brought this year’s No. 6 overall choice to Miami.

Time to sift through the aftermath as we try to determine the winners and losers of these megadeals:

Kyle Shanahan: The Niners, particularly their head coach, have long fought a perception they’ve soured on Jimmy Garoppolo. The quarterback had generally provided solid (occasionally spectacular) play, but injuries ruined his 2018 and 2020 seasons – and, by extension, San Francisco’s. Though never a Pro Bowler, Jimmy G did have his best NFL campaign in 2019 – the only time he’s thrown for at least 3,000 yards or surpassed double-digit TD passes (27) – and the 49ers made it all the way to Super Bowl 54. Garoppolo was adequate against the Kansas City Chiefs on that Super Sunday, the Niners taking a 20-10 lead into the fourth quarter. But even after they coughed up that advantage, Garoppolo could have emerged heroic by hitting wide-open Emmanuel Sanders for the go-ahead TD with 93 seconds to go … but he missed long, and the 49ers never recovered. Still, GM John Lynch had remained publicly supportive in multiple interviews, saying on a podcast last month, “I really believe that Jimmy is our guy.”

Yet it’s pretty apparent there’s been a substantial shift in the organizational mindset. You don’t make this kind of deal – trading three first-round selections – to target even a ferocious pass rusher or lockdown cornerback. Evidently, Shanahan and Lynch have identified at least two quarterbacks in this draft (not named Trevor Lawrence) whom they think can operate this offense more effectively than Garoppolo. Somebody in San Francisco’s brain trust made a convincing argument that this team was one upgraded passer away from long-term contention … and soon we’ll all find out if that’s true.

Tua Tagovailoa: By surrendering the No. 3 pick, the Dolphins have clearly telegraphed belief in last year’s fifth overall selection. Coach Brian Flores has outwardly backed Tagovailoa, who didn’t supplant Ryan Fitzpatrick as Miami’s starter until November. As is the case with most rookies, Tagovailoa’s play was uneven as he finished with a 64.1% completion rate 1,814 yards passing, 11 TDs, five interceptions and a QB rating of 87.1. His final game was his worst, a three-interception day in a 56-26 loss at Buffalo that cost Miami a playoff spot. But with Fitzpatrick gone and little chance the Dolphins will take another QB with their first pick – and more likely a blue-chip weapon for the offense – Tagovailoa should rest easy knowing this job is his as he heads toward a season that will be nearly two years removed from the catastrophic hip injury he suffered in 2019 while playing for Alabama.

New York Jets: It’s still not clear whether they will invest the No. 2 overall pick in a quarterback – BYU’s Zach Wilson, who had a buzz-generating pro day Friday, being the apparent frontrunner – or stick with Sam Darnold while finally surrounding him with scads of talent. But the 49ers’ move up the ladder should generate even more options for NYJ GM Joe Douglas. If he likes Wilson and another quarterback better than Darnold, Douglas could try to extract a bounty from San Francisco – bare as that cupboard now seems – to move up one rung if Wilson is the Niners’ primary target. Regardless, in a quarterback-driven league ruled by supply and demand at the most glamorous position in sports, the Jets’ pick just got more valuable – whether the 49ers or another team covet it – given the certainty that at least two of this year’s top prospects will now be off the board within the first three picks.

Jalen Hurts: Heading into his sophomore season, the Philadelphia quarterback can rest assured he’ll have at least the upcoming campaign to solidify his standing as Carson Wentz’s long-term successor. There had been rampant pre-draft speculation that the Eagles might take another potential franchise QB at No. 6, then let Hurts (a second-rounder in 2020) and the rookie duke it out in camp with the loser possibly serving as trade bait to a team in need of help under center. But it appears an ESPN report from earlier this month, suggesting owner Jeffrey Lurie wanted his front office to build around Hurts in the short term, had veracity – and there should be a slew of interesting weapons to choose from at No. 12, the ultimate choice most likely to be an offensive building block.

Atlanta Falcons and Cincinnati Bengals: Both appear to be sitting pretty in the fourth and fifth slots, respectively, as the draft seemingly shifts to an even more top-heavy QB scenario. With QB Matt Ryan still playing at a high level, the Falcons will likely be choosing between the fourth QB in the pecking order (or maybe even Alabama’s Mac Jones), the best positional player in the whole field, or a trade with a team that will probably be desperate for Ohio State’s Justin Fields or North Dakota State’s Trey Lance. And while QB Joe Burrow, last year’s No. 1 overall pick, mends from ACL surgery, the Bengals are likely staring at a welcome dilemma – whether it be a downfield weapon like LSU WR Ja’Marr Chase or Florida TE Kyle Pitts or a much needed bodyguard for Burrow like Oregon OT Penei Sewell or Northwestern OL Rashawn Slater

Eagles rebuild: After winning the Super Bowl for the first time in 2017 and going to the playoffs the following two seasons, the wheels came off in 2020 – aging veterans succumbing to injuries, deficiencies exposed and Wentz’s play cratering in a cascading series of problems that made it difficult to discern cause and effect. But now executive vice president/GM Howie Roseman and rookie coach Nick Sirianni have additional assets, including an extra fourth-rounder this year along with 2022’s extra Round 1 pick, to retool in a division that seems to be in play annually. And even if Hurts doesn’t pan out, the Eagles have the wherewithal to more effectively replace him – especially when you consider how Roseman masterfully climbed the board to obtain Wentz second overall in 2016.

Justin Fields/Trey Lance/Zach Wilson: One of them will almost certainly be the 49ers’ selection at No. 3, all of them tantalizing talents with bigger arms and faster legs than Garoppolo. He will join a team that features a dominant defense (when healthy), an offensive line that just reinvested in Pro Bowl left tackle Trent Williams and added center Alex Mack, a fleet of capable backs, up-and-coming receivers Deebo Samuel and Brandon Aiyuk, the top tight end in the NFC (and maybe the league) in George Kittle … and finally Shanahan, regarded as one of the NFL’s most creative offensive minds and premier play callers. A golden (and red) opportunity to play for what should be a perennial contender and become part of NFL quarterbacking royalty for a franchise led to glory by Hall of Famers Joe Montana and Steve Young. And given how heavily Shanahan relies on the run when this offense is at its best, the rookie may not even have to do that much initially once he cracks the lineup.

Justin Fields/Trey Lance/Zach Wilson: The pressure and scrutiny will be intense on whomever the 49ers select. This is a team built to win immediately, but one that must navigate the fierce competition (and defenses) that roam the NFC West. It seems doubtful the chosen rookie will play right away, especially as reports emerge that the 49ers still plan to start Garoppolo in 2021 – and he has obviously displayed borderline championship-level efficacy. But eventually Fields, Lance or Wilson will be anointed – likely sooner than later – and it will be go time, Niners fans and veterans in that locker room knowing nothing less than the organization’s sixth Lombardi Trophy will qualify as success.

AFC East: The Bills look tough coming off a trip to the AFC championship game, while the Patriots and Jets reload (to the degree the Jets were ever loaded). But on the heels of a somewhat surprising 10-6 season, even one that ended in disappointment, the Dolphins are positioned for quite an influx of talent with five first-round picks in the next three drafts.

Carolina Panthers: Heading into his second season, coach Matt Rhule has openly admitted he’s looking to upgrade every position, including the one veteran quarterback Teddy Bridgewater currently holds. According to multiple reports, the organization badly wanted to bring Houston Texans star Deshaun Watson back to the Carolinas, though the embattled quarterback’s mounting legal issues have clouded his immediate future. Mired at No. 8 in the draft order, Rhule’s Panthers may have to consider potentially exorbitant deals with the Jets or NFC South rival Falcons to ensure they secure one of this year’s premium passing prospects.

Ja’Marr Chase: If you conducted a poll to determine the draft’s top non-quarterback prospect, the LSU wideout and 2019 Biletnikoff Award winner – Chase opted out in 2020 – would probably emerge as the winner, possibly in a runaway. However with the Niners advancing into the top five, likely accelerating the QB market, Chase – widely viewed as a logical choice for Miami when it owned pick No. 3 – might slip into the latter half of the top 10.

NFC West: What was arguably already the NFL’s most loaded division may soon be even better with the Niners, just a year removed from an NFC title, likely to shore up their quarterback depth chart – an area where the Cardinals, Rams and Seahawks all appear quite settled … assuming Russell Wilson and Seattle work out their issues. Still, this could be a bloody war of attrition as San Francisco prepares to re-enter a fray that nearly produced three playoff entries last year before Arizona’s second-half swoon cost them the conference’s final wild-card berth.

Jimmy Garoppolo: He arrived in the Bay Area amid a ballyhooed midseason 2017 deal, the first year Lynch and Shanahan were on the job, and was quickly rewarded with a five-year, $137.5 million package – a record at the time despite Jimmy G’s relative inexperience – after he went 5-0 post-trade. But now Garoppolo is surely on borrowed time, very unlikely to craft an Aaron Rodgers-like MVP retort to save his job. And with the Patriots (Cam Newton), Bears (Andy Dalton) and Washington (Fitzpatrick) all signing QBs for 2021, chances are there isn’t a bona fide opportunity for a fresh start elsewhere for Garoppolo, who has two years left on his deal and is still owed roughly $51 million. Prior to Newton’s re-signing on a team-friendly, one-year pact, there had been speculation Garoppolo might reunite with Bill Belichick in New England. But that seems like a trickier proposition now that the Pats have doled out so much of the nearly $70 million in cap space they had available not even two weeks ago – meaning better chance Garoppolo enters the 2021 season on a hot seat rather than a comfortable one.