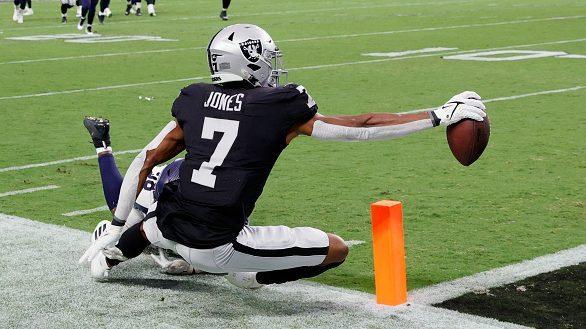 It appears Jones has similarly struck a chord with Gruden as well.

“I would say his ceiling is untapped,” Gruden said, via W.G. Ramirez of the Associated Press. “He’s taking advantage of these opportunities. … “I’m rooting for him, I’m really happy for him because nobody has work harder than him.”

Jones had a strong opening to the preseason for the Raiders, catching three passes for 57 yards against the Seattle Seahawks on just 13 snaps before taking a seat for the remainder of the game.

Jones is trying to recapture some of the success he had during his second season in the NFL with the Buffalo Bills. Jones started 15 games in 2018. He caught 56 passes for 652 yards and seven touchdowns during a career season with the Bills.

But Jones wouldn’t last another full season in Buffalo as he was traded to the Raiders after just five games the following season. He’s combined for just 34 receptions, 301 yards and one touchdown in his 26 games played for the Raiders since the trade.